On a sunny spring afternoon, Maxine Rooks, age 75, a retired nurse, is seated in her living room in North Carolina with her daughter, Erica Rooks-Daughtry, age 50. The two women are sharing their stories about uterine fibroids, a health condition that runs in families and affects almost 80% of African-American women by age 50.

At age 27, Rooks began experiencing major problems with her menstrual cycle. By then, Erica had already been born. Rooks’s periods became irregular. Sometimes she wouldn’t menstruate for six months straight. In addition, when her cycle did come, the menstrual flow was sometimes so heavy that blood would seep through to her outer garments while she was working. Doctors prescribed hormones and other therapies, but as soon as she stopped the treatments, the problem recurred.

“By age 49, I was having lots of trouble,” she says. “At that time, medicine wasn’t as advanced as it is now, but they were able to tell me that I had fibroids.”

Usually noncancerous, a uterine fibroid is a tumor that grows in the wall of the uterus. The growth can be a single tumor, or a number of them may be present. Women with fibroids experience either no symptoms or issues such as pain, heavy menstrual bleeding, pressure on the bladder or rectum, painful sex, frequent urination, lower back pain and an enlarged lower abdomen if the tumors are very large.

Doctors told Rooks that eventually her fibroids would either shrink, or, when she got a little older, she would probably need a hysterectomy. At one point, she experienced uncontrolled bleeding. “For three months, I bled every day,” she says.

A year later, Rooks got up one night to go to the bathroom. “Blood was just pouring out of me like water,” she recalls. “They told me that one of the fibroids had erupted. At that point, I had been bleeding for quite some time, so then I didn’t have a choice. Doctors said I had to get a hysterectomy.”

After the surgery, Rooks faced new troubles. “The stitches in my abdomen didn’t hold, and I ended up having to heal from the inside out, which took months,” Rooks says. “With my stomach open, I couldn’t work. I couldn’t do anything. The nurses would come in twice a day and change the bandages.”

Rooks relied on her colleagues at the hospital for support. “I could talk to doctors and nurses who were my friends there, so I didn’t feel isolated,” she says. 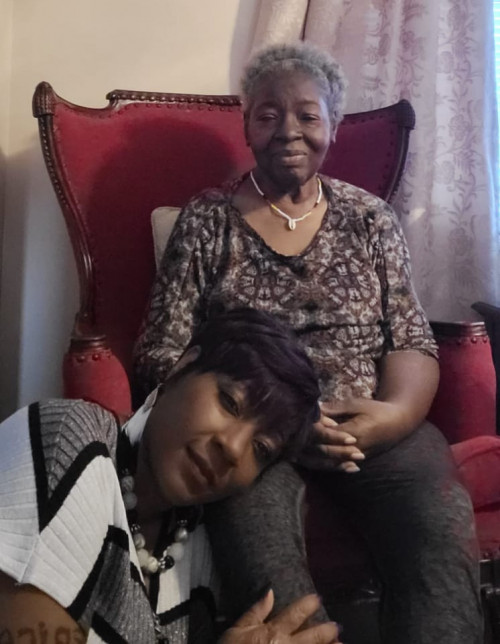 Mothers should take their daughters to the doctor for regular checkups.

A certified medical assistant, Rooks-Daughtry’s experience with fibroids was almost the same as her mother’s. “I started to bleed every day for two months straight,” she says. “But my pain level was so extreme that I felt this wasn’t normal.”

When she told her gynecologist about the bleeding, he ordered a sonogram. The results showed the presence of a small group of fibroids. “But they began growing, and then more appeared,” Rooks-Daughtry says.

After a conversation with her mother about the examination, she learned that fibroids ran in the family. “It became hard for me to work because my cycles were so severe, and the bleeding was so intense I had to carry extra clothes to work,” she says. “There are certain jobs in the medical field where you can only wear white. That was hard because you’d have to change your pads every hour, and you can’t be off the floor. I would have to take off my jacket and wrap it around myself. It became very stressful.

“Then it got worse because I start passing blood clots,” she adds. “That became an even larger issue, so I was back and forth to my gynecologist.”

Rooks-Daughtry’s doctor suggested she have the fibroids removed but also warned her that they would grow back. She followed his advice. “But just like he said, they came back,” she says.

Some of her fibroids were small and some large. Her heavy menstrual bleeding continued unabated until she opted for a hysterectomy. Rooks-Daughtry was then diagnosed with polycystic ovary syndrome (PCOS), an illness doctors believe is caused by an imbalance of the reproductive hormones, triggering the development of cysts in the ovaries.

The exact cause of PCOS is unknown. But experts think that, just as with uterine fibroids, genetics plays a role in the development of the problem. As with fibroids, PCOS can cause women to miss periods or experience irregular menstrual cycles. “Doctors don’t know much about this disease and basically have no idea how to treat it,” Rooks-Daughtry says. “It can affect your whole body and cause weight gain and hair loss, and it affected my pregnancy.”

Rooks-Daughtry has three sons. Her second child was born premature at eight months but weighed 4 pounds 9 ounces. “He was OK, but my third child was born weighing 1 pound, 5 ounces. That was a rough one,” she says.

The current medical consensus is that fibroids and PCOS are separate illnesses. However, findings from a six-year study of more than 23,000 premenopausal Black women challenges this viewpoint. Among women who had no history of uterine fibroids, scientists found a 65% higher incidence of these tumors among women with PCOS than in those who didn’t have the illness.

This finding led some researchers to believe that the two conditions might be connected, especially since they share certain risk factors and symptoms. Both fibroids and PCOS are linked to genetics, obesity and hormonal imbalances.

But whether or not the two conditions are linked, many women who suffer from fibroids, like Rooks-Daughtry and her mother, say they feel let down by a care system that’s historically been biased against women’s medical issues.

“My opinion is that a lot of male doctors could care less about these illnesses; they just want to get you out of their office,” Rooks says. “I’ve always looked for female doctors because they take an interest in what you’re experiencing and explain things in a much better way. That’s always worked out well for me.”

But some women’s health advocacy organizations are working hard to generate more funding for uterine fibroids research. Legislators recently introduced the Stephanie Tubbs Jones Uterine Fibroid Research and Education Act of 2021, which would fund federal research projects and education programs about the condition.

Meanwhile, women should be proactive, the mother and daughter advise. “Mothers should take their daughters to the doctor for regular visits to make sure that they get checked out so maybe they won’t have to go through some of the things that we went through,” Rooks says.

“If your flow becomes heavy, immediately find out what’s going on because both PCOS and uterine fibroids can cause a whole lot of issues,” Rooks-Daughtry stresses. “I told my sister to get my nieces to the gynecologist to get them tested for fibroids and PCOS so any problems could be detected as soon as possible.”