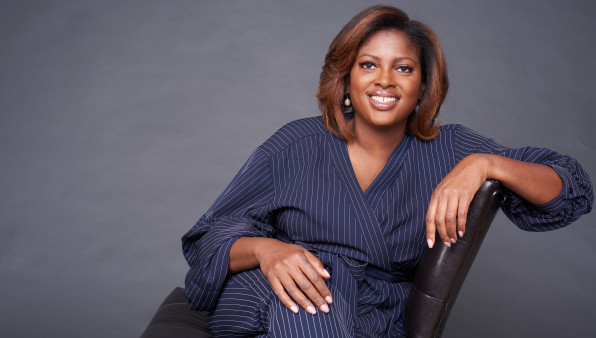 Instead, Sateria Venable found a less drastic solution to the uterine fibroids that plagued her and blossomed into a passionate and prolific advocate.

Like many women with uterine fibroids, Sateria Venable experienced monthly periods marked by heavy bleeding. The Baltimore native began menstruating at age 11. She grew accustomed to the horrific cramps that felt like contractions. Her mother and aunt faced the same problems, so she accepted the symptoms as normal. “I thought that would be my plight,” she says. “I just adapted to the pain and anguish and took medications for the severe cramping and bleeding, which got heavier and heavier as I went through middle school and then high school and then college.”

After graduating from college the situation worsened. “The bleeding was just even too extreme for me, so I went to see an ob-gyn and was diagnosed with uterine fibroids at age 26,” Venable says. “I’d never heard the word fibroid.”

Shocked when the doctor suggested that she undergo a hysterectomy (removal of the uterus), Venable was convinced that this radical surgery, especially for someone her age, could not possibly be the only option available. “That was the beginning of my treatment journey,” she says.

Her first attempt to find a solution, however, was harrowing. “I found a physician to do a laparoscopic procedure on me shortly after I was diagnosed, and it turned out that she was not skilled enough to do the surgery, and she ended up not prepping me correctly,” Venable says.

Laparoscopic surgery involves the removal of fibroids using a laparoscope, a thin tool with a tiny video camera and light on the end, that’s inserted through an incision in the abdominal wall. The procedure leaves the uterus intact so a woman’s ability to become pregnant is not affected.

“She punctured my uterus with an implement while I was in surgery and had to stop, wake me up and bring me out of it with nothing being accomplished. This is following months of prep for the surgery and preop visits, blood draws, everything. After that, I was afraid to have a procedure, but the symptoms just got even worse.”

A few years later, Venable conquered her fear and tried the same surgery again. This time the operation was a success and temporarily rid her body of a small fibroid. “I had four surgeries for uterine fibroids,” she says. But the noncancerous growths would always return.  Unable to find someone to treat the condition, Venable resolved to find answers for herself.

“When I found out the statistic that 80% of women of African descent develop uterine fibroids, I just could not understand why someone was not yelling from the rooftops,” she says. “And so I started blogging about my personal experience month to month. I would encounter anemia or some other issue and how I resolved it, and I started talking with women.”

These conversations changed the course of Venable’s life. “I realized that women really wanted to share their stories, and I realized that there were many other women also suffering,” she says.

At the time, Venable, an architect by training, worked in real estate development and construction management. In 2007, she kick-started her advocacy with the launch of The Fibroid Initiative. “I had a very demanding job in the field for which I was trained, and I was slowly building the organization,” she says.

In 2013, she changed the group’s name to The Fibroid Foundation. “I worked until 2017 in both of those roles before I began to totally focus on the foundation, and it has been quite a journey,” Venable says. “It’s not something that I was trained for, but I found that it is life-changing work, and it’s been more gratifying than I could have ever imagined. Today, we have slightly over 28,000 followers and 21 chapters, and we are in 48 countries.”

With the foundation’s expansion, Venable hopes to raise public awareness about uterine fibroids and generate more interest in research on this condition, which affects 70% to 80% of women under age 50.

However, uterine fibroids—among the most common benign pelvic tumors in women—aren’t well studied or widely discussed as a public health issue, despite their substantial impact on women’s health.

There are many reasons why the condition isn’t more talked about and relatively few investigations have identified opportunities to prevent uterine fibroids. But Venable believes that two factors eclipse most others. “One, I think, is the historic stigma around talking about menstrual issues, and the other is because uterine fibroids happen to women,” she says. “I find that in many arenas, finding solutions for men’s health issues can oftentimes progress more rapidly than for women. I think this has been key to the lack of recognition in general for women’s health concerns.”

Not only is more research on why women develop uterine fibroids needed, but also more input from different sectors of the community is required for scientists to amass a greater body of knowledge on the condition. “We need women who are willing to participate in clinical trials, and we need funding,” Venable stresses.

Care providers also play a role, she adds. “At The Fibroid Foundation, we support education and awareness, where women are given all treatment options and are then able to make a decision that works best for them,” she says. “There is no one-size-fits-all approach for treatment because uterine fibroids vary greatly from woman to woman—they vary in size, shape and symptoms—and there needs to be a collaborative effort or shared decision-making with a fibroid specialist to be able to help each woman to find a customized solution that’s going to work best for her.”

In addition to traditional treatment options for uterine fibroids, Venable has tried various holistic remedies, which have provided short-term relief. “But you have to have a balance and just kind of watch your body because you don’t want to rely on the holistic modality to your detriment,” she cautions. “You really have to monitor your symptoms month to month to see what’s working for you because the treatments for fibroids could be as unique as the symptoms that we see in women with uterine fibroids. This is one of the reasons why it has been so difficult to work with the limited resources that have been made available to date to be able to find solutions for this health concern.”

In her early days as an advocate, Venable tried to devise her own solutions for some of the common problems caused by uterine fibroids. For example, she designed a sanitary napkin that provided coverage for women experiencing heavy flow during the day or night. “Designing the undergarment and coming up with the solution was really kind of relying on my design background,” she says. “Over the years, I found myself modifying my sanitary products because there was nothing on the market.”

Venable filed a patent for the product. “But two months later, Procter & Gamble came out with the exact same sanitary napkin that I had filed for, so, naturally, I couldn’t pursue that any further,” she says. “But this told me that I understood the mechanisms of blood flow enough to be able to design this product.”

Another undergarment she designed, however, was successfully patented. “This foundational garment is for a company that I’m developing, Comferie Lingerie—a line of comfortable lingerie for all women,” Venable explains. “I think it took about three years from the design to the issue of the patent, and this was really fun for me because navigating the waters of filing the patent and seeing the process through to fruition kind of checked all the boxes of my architect’s inquisitiveness.”

The garments will be for women of all body types and sizes. “There’s going to be a medically focused design line and a line for everyday wear,” she says.

In connection with her foundation, Venable also participated in COMPARE-UF (Comparing Options for Management: Patient-centered Results for Uterine Fibroids), one of the largest nationwide research studies on uterine fibroids.

“We were tracking what women were already deciding to do with their treatment care and making note of their symptoms and options,” Venable explains. “A lot of papers came out of that study, and I actually sat on the registry steering committee with 16 physicians, which was highly unusual and very fruitful and quite a learning experience.”

Now anchored in the research space, the foundation is working with Dartmouth University on a tool that women with uterine fibroids can use to communicate with their physicians. “We also worked with other registries and look forward to working on more in the future,” she says.

Last year, Venable’s organization supported a bill to drive research and education about uterine fibroids so women could get the information and care they need. Congresswoman Yvette Clarke first introduced the Uterine Fibroid Research and Education Act in the House of Representatives in March 2020 and then Senator Kamala Harris, now the nation’s vice president, introduced it in the Senate in July.

“I started advocating for that legislation in September 2019 and spent many days on Capitol Hill meeting with lawmakers and was pleased to see that our efforts were successful,” Venable says. “There was a lot of receptivity to that particular legislation, which was proposed in the Defense Act of 2020, but it was removed. I hope that it will be reintroduced because women in the military are experiencing gynecological challenges in terms of diagnoses like fibroids and endometriosis, and they too need support.”

However, Venable’s most immediate goal is to offer women with uterine fibroids the information and support she could not readily find many years ago when she most needed it.

“We are really trying to be a strong peer-to-peer support and also be a presence on the ground to support women locally, which is why we established our chapter initiative,” she says.

“A lot of times women feel like they are alone in their fibroids diagnosis,” she continues. “We want to be able to help them through that process and provide the assistance they need for preop, post-op, doctors’ visits and questions to ask, peers to walk them through their surgical experience, just really offer them total support.”