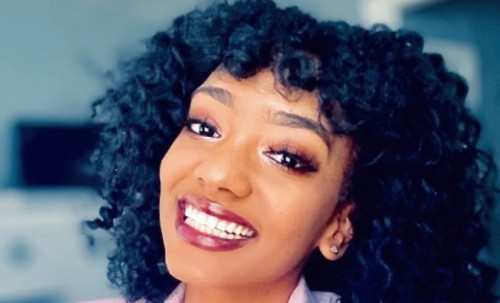 Despite heavy periods, Dearra Williams was unaware she had uterine fibroids. Then the worst pelvic pain she ever felt struck.

Dearra Williams used to think the heavy bleeding and intense pain she experienced during her period was normal. Then in January 2020, she landed in the hospital and was diagnosed with uterine fibroids.

“I had an ovarian cyst that was 15 centimeters,” says Williams, a 25-year-old marketing and development associate from Chicago. “It took over my whole stomach. But when [the doctors] did an ultrasound and an MRI, they found out that I had a fibroid as well. I had a double whammy.”

Living with these conditions made Williams depressed. “I felt like I was living in a different body,” she recalls. “I didn’t feel like myself.”

One way she coped was to work out. However, the fibroids began to interfere with her exercise regimen. “I couldn’t work out like I used to and that affected my mental health,” Williams says. “My confidence wasn’t the same because the fibroids made my stomach swell up. I couldn’t fit into any clothes. I couldn’t wear anything too tight. I had to wear sweatpants and leggings.”

In addition, Williams became reclusive because she wasn’t sure when the pain would strike. She kept pain medication on hand at all times, just in case. “It was a very hard time,” she says.

Williams’s doctors told her that the pelvic pain she experienced was caused by both her cyst and fibroid. However, because of insurance issues, Williams had to wait six months for an operation to remove the growths. During that time, she also switched doctors.

Initially, Williams considered an alternative route to shrink her fibroid. She knew that improving her eating habits and managing her stress could help. But when her new doctor told her about an innovative laser procedure that could reduce the size of fibroids, Williams was so impressed with her knowledge that she trusted her and opted to get the procedure done.

“She was super helpful and communicated so effectively,” Williams says. “She talked to me about kids and making sure I could still have kids. She went step-by-step to let me know every part of what was going to happen.”

When Williams underwent the procedure to remove the fibroid, her doctor found another tumor. Both fibroids were located on the right side of her uterus and were about the size of tangerines.

The operation alleviated some of Williams’s problems. “It helped a little bit because it used to be worse,” she says. “I see about a 30% change after having the procedure for my fibroids.”

But she continues to be plagued by symptoms. “I still have very heavy periods, and I feel very bad pelvic pain,” she says. “I’m still struggling with it.”

Williams has since embraced a healthier lifestyle. She gave up meat and doesn’t drink a lot of alcohol. “I am on a plant-based diet now, which has changed my life completely,” she says. “I’ve been doing this since June of last year, and it’s helped me a lot. Now, I have more energy.”

She also drinks more water and exercises four to five times each week.

Williams’s own experience with fibroids led to the discovery that an aunt of hers had also lived with fibroids. “I didn’t find out until I opened up and told my family that I was having surgery. This type of talk didn’t happen in my family.”

Williams adds that if it hadn’t been for her best friend, who also had fibroids, she might have suffered in silence. “There’s a huge percentage of Black women who have fibroids, yet we don’t talk about things like this,” she says.

During a follow-up visit to verify the success of the surgery, Williams’s doctor checked her insides with an imaging procedure. “She said that I was good and she wants to see me in a year,” Williams says. Her biggest concern—given that she still experiences heavy periods and pain—is that she might have another fibroid.

“I am stronger,” she says. “I learned my lesson: to make sure that I take care of myself before anything.”

She advises other Black women with fibroids to speak with their doctors. “Create a bond with them because this is a personal experience,” she says. “If you don’t feel right or you feel pain, don’t push it off.”

She also encourages women to do their own research and share their stories. “When I start being open about it, that’s when people respond and say, ‘Do you know I have them?’ It’s like building a little community where we can talk about things and share tips and tricks.”