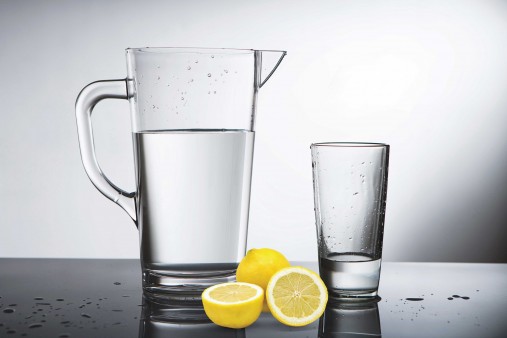 Water isn’t only for drinking—it’s key to all biological processes.

We begin life floating in a pool of amniotic fluid, the earliest testament to the essential role water plays throughout our lives. This liquid protects the fetus in the womb and is key to its development. Additionally, water ensures that the body functions properly.

Water helps the body maintain its temperature, digest food, metabolize fat, lubricate and cushion organs, transport nutrients and flush toxins. For example, not drinking the recommended amount of water each day can lead to the development of kidney stones, which are clumped deposits of minerals and acid salts that cause pain when they pass through the urinary tract.

Fortunately, drinking fluids isn’t the only way our bodies fill up on water. We take in about 20 percent of the water we need when our body breaks down the various foods we eat via the process of metabolism. Foods high in water content include low-fat milk (90 percent), oatmeal (84 percent), lettuce (96 percent), tomatoes (95 percent) and broccoli (89 percent), says registered dietitian Nancy Clark, MS, a board-certified specialist in sports dietetics and author of the best-selling Sports Nutrition Guidebook.

Although unlike these foods, water contains no calories, it supplies electrolytes, such as potassium and sodium, essential minerals that help the small intestine perform digestive operations.

When water that’s lost during normal day-to-day bodily functions, such as breathing, sweating and excreting waste, must be replaced, we get thirsty. This means we drink more water to avoid such problems as dehydration, which can lead to heat exhaustion, heat stroke or, in extreme cases, a loss of consciousness. (A 2 percent water loss can cause dehydration.)

When digested food passes into the small intestine, enzymes released from the pancreas further break it down into fats, carbs and proteins so they can be absorbed into the bloodstream. Afterward, this food moves into the large intestine, or colon, where water and nutrients are extracted; the rest passes out of the rectum as waste.

Some scientists believe that not drinking enough water could lengthen the time it takes for undigested waste to pass through the colon and increase the risk of colon cancer. Decreased water intake can also cause concentrated levels of carcinogens to build up in the bladder and lower urinary tract.

According to WebMD, research reported in the Journal of Clinical Endocrinology found that proper water hydration can help fat loss because the body burns calories when it warms digested water.

But Clark stresses we take a commonsense approach to water drinking, and even questions the recommendation that everyone should drink standard amounts of water every single day. Clark says this depends on a person’s need.

“There is no scientific validation of theories that excessive water intake will improve weight loss, remove toxins or improve skin tone,” she cautions. “Should you plan to drink eight glasses of water a day? No scientific evidence supports that rule, so you can simply drink in response to thirst.”

Nevertheless, the necessity for people to drink lots of water when exercising and in warm weather is supported by proof. Experts suggest that you sip water before, during and after exercise. Hydrating before working out ensures that there are balanced levels of fluid and electrolytes in the body.

During exercise, it’s easy to become dehydrated depending on how much you sweat and how vigorous and long your workout is. After exercising, it’s smart to rehydrate to replace the fluids and electrolytes we lose.

Dehydration can trigger headaches, flushed skin, fatigue, muscle weakness, dark urine and a depressed appetite. This is why experts at the American Council on Exercise (ACE) say it’s important to drink water even before we crave it. “Thirst is a signal that your body is already on the way to dehydration,” they advise. “It is important to drink more than thirst demands and to continue to drink throughout the day.”

Both these ACE experts and Clark agree that a good way to check your hydration level is to monitor the volume and color of your pee. “If your urine is scanty, dark and smelly, you should drink more [water],” she says. “If you have not urinated during your work or school day (8 a.m. to 3 p.m.), you are severely under-hydrated.”

Not drinking enough water is also associated with salivary dysfunction, especially in older adults. What’s more, findings show that elderly people often experience diminished thirst sensation, which puts them at risk of dehydration and can result in health problems such as constipation, cognitive impairment, functional decline, falls or stroke.

Additionally, the brain—which consists of 85 percent fluid and whose functions are fueled by water—requires a steady intake of H20 because it doesn’t store this liquid. Findings from a study conducted by researchers from the University of East London and the University of Westminster in the United Kingdom showed that participants who were thirsty and drank water prior to being assigned tasks were able to complete their work faster than those who didn’t drink up.

Surprisingly, the study also showed that thirsty participants didn’t do well on complex rule-learning tasks after drinking water, suggesting there may be a difference between thirst and dehydration. Researchers have found that when the brain is dehydrated—by as little as 1 percent—our ability to focus and think effectively is disabled. If dehydration persists, short-term memory may be affected. In addition, water kick-starts electrical activity in the brain and helps to produce some hormones in the body.

Although there are no official recommendations for how much plain water adults and young people should drink daily, general guidelines suggest that our daily fluid intake depends on age, sex, pregnancy and whether we’re breast-feeding. Men require more water than women, and although both men and women need less water as they age, seniors must be careful to drink enough.

But older folks aren’t the only ones who risk shortchanging their bodies of cool, clear water. In the United States, younger non-Hispanic Black people, Mexican Americans and adults with lower incomes and education drink less plain water.

U.S. adolescents who avoid the thirst quencher, according to the Centers for Disease Control and Prevention, tend to drink less milk, eat fewer fruits and veggies, exercise less and scarf down more sugar-sweetened beverages and fast food.

Although we take for granted that there will always be ample water on the planet and that we’ll be able to slake our thirst at any time, this isn’t true for a lot of people in the world, including some folks in the United States. News reports about the scarcity of water in different states predict that in the near future, huge rivers and lakes will dry up.

Globally, water shortage is a problem. In many areas, people already struggle daily to locate fresh water to drink. The problem is so dire that environmentalists have now issued a call to action to countries everywhere. We need stronger measures to preserve our current resources and ensure that we will always be able to count on having enough pure, clean water.

Let’s not wait until the well runs dry.

Almost seven years ago, a CBS news report discussed “America’s dwindling water supply” and the effect of climate change on this precious natural resource that Americans consume in larger amounts than any other group in the world.

But many countries are experiencing a lack of potable water to meet the needs of their people. According to economists, the scarcity of water will trigger a crisis for future generations.

As a defense against this looming disaster, some countries, and a few cities in the United States, have started conservation programs to protect their current supply of water. In Las Vegas, after the water capacity in Lake Mead—the city’s main source of drinking water—plunged, local officials paid homeowners to replace their lawns with desert plants that require less water. Additionally, authorities issued fines to those who insisted on violating water restrictions.

As populations and industries boom around the globe, the rising need for water will prompt more efforts to control who owns and uses this resource. Because of these changes, some areas on the planet will get more water than others. Governments will have to devise new ways to meet everyone’s need for this once-plentiful asset.

Some businesses are already implementing strategies that anticipate the predicted water deficit. For example, Ford Motor Company uses water to make components for its vehicles. But now, by recycling the water it uses for the production of parts for its transmissions, Ford has managed to slash the amount of water required for the process.

While companies search for ways to reduce the amount of water they consume, engineers and environmentalists stress the need to create bigger and better programs to treat and reuse water now and in the future.

Our survival depends on it, they say.