This essential nutrient can power more than just smoothies.

The body needs protein in order to grow and repair cells. Consequently, a deficiency of this macronutrient could stunt growth and weaken the immune system. In addition, protein is essential for maintaining and building tissues and muscle. But because the body doesn’t stockpile protein—unlike some other key nutritional compounds, such as carbohydrates and fats—people regularly require large amounts of it.

Protein is found in fish, poultry, beans and nuts. However, experts suggest steering clear of processed deli meats, such as hot dogs and sausages, because although they are high in protein, findings have linked them to cardiovascular disease, colorectal cancer and type 2 diabetes. Protein may also be sourced from soy, wheat germ and quinoa. But high quality protein powder—which can be used to whip up delicious dishes beyond shakes and smoothies—is another excellent source of this powerhouse nutrient.

Protein powders can be incorporated in a variety of ways when cooking or baking, says Anna Sward, author of The Ultimate Protein Powder Cookbook: Think Outside the Shake. “Maybe you’re just bored with chicken or fish with a side of vegetables and rice and you want some excitement in your culinary life,” she writes. “Maybe you want to make pizza a staple of your diet.”

Sward wrote her cookbook to introduce food lovers to the almost endless ways to use protein powder to create tasty, healthful dishes ranging from savory meals to tempting desserts, snacks and other treats. Along the way, she debunked some myths and addressed some concerns that might have deterred folks from using protein powder as an ingredient in their kitchens.

One such myth is that protein powder is only for men and that if women use it, they can become bulky. (As with weight lifting, consuming protein powder won’t cause women to build too much mass because their bodies don’t produce the same amount of testosterone as men.) And beware of protein powders claiming to be for women only. This is a marketing ploy, Sward cautions, because often these products “contain the same ingredients as the powders sold to men.”

Protein powders are “real food,” Sward explains. Most are a by-product of food manufacturing. For example, whey is produced during cheese making and is used in baked goods, milk and cereals. And hemp protein powder results from the production of hempseed oil, which is rich in omega-3, -6 and -9 fatty acids and fiber. What’s more, egg whites are also used to make protein powder.

But some protein powders contain ingredients you wouldn’t want to eat, Sward cautions. This means artificial flavors, preservatives and fillers. Just “go for the simplest protein out there” with “one, two or three ingredients that you know and understand,” she says.

Sward also addresses the concern that protein powders are denatured—meaning that they’re stripped of their nutritional value—when heated. Many people believe this is why no one should cook with protein powders. But Sward counters that the same amino acids in protein powder remain undamaged when they’re in foods that are cooked. “When you eat the protein, its molecules are broken down into individual amino acids and brought together in your cells, becoming a source of dietary protein,” she explains. “Cooked or uncooked, your body absorbs protein the same way.”

Protein powders on the market today include whey, casein, pea, rice, hemp, egg white, beef and soy. When used in cooking, many of them exhibit different properties.

For instance, whey protein powder, with its slightly milky taste, contains all nine essential amino acids that the body requires. Sward emphasizes that a moisturizing ingredient is needed when cooking with whey because this protein powder can make foods dry. “If you don’t know what you’re doing, the chances of ending up with something really dry, cardboard-like or rubbery are pretty high,” she says. 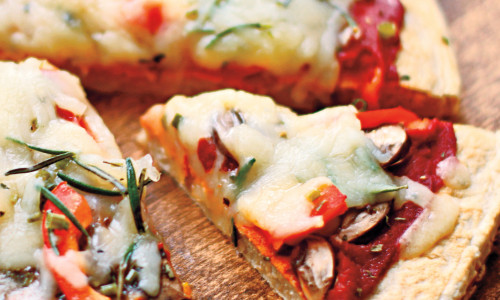 Casein, like whey, is a dairy-based protein that contains the essential amino acids but behaves differently in the body. Whereas whey is easily digested, casein takes longer to break down. During cooking, casein absorbs more liquids, so it’s easy to use to make thick, creamy dishes, such as protein puddings, protein bars, fluffs, flans and frostings. “It’s also great to bake with,” Sward says, “maybe even more so than whey.”

Sward is also a fan of egg white protein powders. But individuals should know the source of the eggs in their protein powder, Sward warns. For example, eggs from chickens housed at factory farms can contain traces of antibiotics, hormones or potentially deadly pathogens, such as salmonella.

Beef protein contains essential amino acids and can be used to make everything egg protein powder is used to create—even cookies. But it “tends to be one of the most expensive protein powders out there.” Plus, some may find the idea of using beef protein powder a bit weird, Sward says. But the proof of how well it works in food is in how effectively it can be used to produce all the aforementioned tasty goodies.

For vegetarians, powders derived from plants, such as pea, rice, hemp and soy, can boost the protein content of foods. Although pea protein doesn’t contain all the essential amino acids, it’s easy enough to add foods that contain the missing elements to complete the protein package.

Although rice protein powder, which is derived from brown rice, is not always considered the best for cooking, it’s excellent to bake with, Sward says. Its tendency to dry out dishes can be countered by adding moisturizing ingredients, such as the ones previously mentioned. Go easy, though, because just a little is enough for most recipes.

Hemp protein powder contains 21 amino acids and is considered a complete vegetarian protein. In addition, this supplement contains several essential fatty acids and is high in fiber. Use it in cooking but add a lot of liquid to prevent dryness. Sward favors hemp for its chocolaty taste and uses it to make protein truffles, cakes, chocolates and brownies.

Sward’s least favorite protein powder to cook with is soy because many soy protein products are sourced from genetically engineered soybeans and contain phytoestrogens that can mimic estrogen and interfere with the body’s endocrine and thyroid gland function.

Sward suggests that folks pick protein powders based on the ingredients they’re made from and their taste, mixability and consistency. Bypass or limit your use of the ones with artificial sweeteners, she says, and go easy on those with sugar alcohols, such as xylitol and erythritol, as they may trigger gastrointestinal problems.

The first section of Sward’s cookbook is essentially a guide to everything people need to know about how to cook with protein supplements. Her goal, she says, was to produce delicious and highly nutritious food and avoid empty calories. But she also wants people to have lots of fun trying out the recipes.

And by all means, experiment and create your own personal food favorites, she says, because when it comes to protein powder, there are limitless ways to “think outside the shake.” 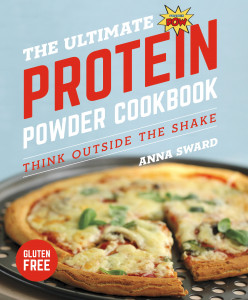 Advice from Anna Sward for cooking with protein powder

“Throw your hat into the air,” Sward suggests. “Turn up your music. Dance while, for example, waiting for your pancakes to cook or your cake to be ready. Sing or whistle while you bake. Sample your batters. Listen to your taste buds. Draw outside the lines, and think outside of making boring ol’ shakes!”