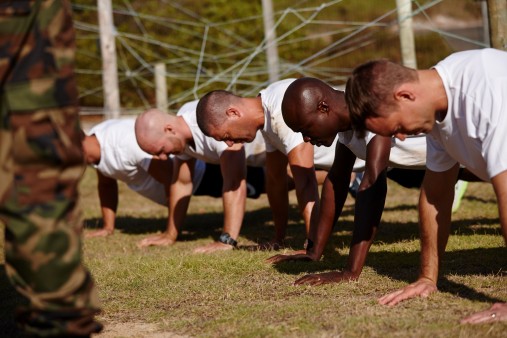 When Todd J. Corbin was a lance corporal in the Marines, the physically fit soldier from Ohio risked his life in Iraq to save five wounded comrades. Corbin ran through enemy gunfire, grabbed these men, threw them over his shoulder and brought them to safety. But if Corbin had been like more than 27 percent of all Americans ages 17 to 24, he might never have accomplished this heroic feat because he’d have been too heavy to join the military.

According to a report commissioned by Mission: Readiness, an organization of retired senior military leaders, American soldiers are getting fatter. Released by the Pentagon just a few years ago, this report reflects the broad-based rise in obesity rates that has affected U.S. adults and children and seriously alarmed many in America’s armed services command.

“Child obesity has become so serious in this country that military leaders are viewing this epidemic as a potential threat to our national security,” says retired U.S. Army General Johnnie E. Wilson. “We need America’s service members to be in excellent physical condition because they have such an important job to do. Rigorous service standards are critical if we are to maintain the fighting readiness of our military.”

Retired U.S. Army General John M. Shalikashvili, a former chairman of the Joint Chiefs of Staff, notes that each month, “hundreds of otherwise excellent candidates for military service are turned away by recruiters because of weight problems.” Shalikashvili adds that since 1995, the proportion of recruits who failed their physical exams because they were overweight has risen by nearly 70 percent.

Shalikashvili and others blame mounting casualties in the battle of the bulge on the availability of junk food and high-calorie drinks in America’s schools and its subsequent impact on childhood obesity. “We need to reverse this trend, and an excellent place to start is by improving the quality of food served in the schools,” Shalikashvili suggests.

During World War II, the military became concerned about U.S. soldiers who suffered from stunted growth because of poor health and inadequate nutrition. In response, it lobbied to ensure that schools provided American kids with healthy meals. Their advocacy sparked the passage of the National School Lunch Act in 1946.

The generals responsible for the findings also stress the need for Congress to increase funding to school lunch programs for healthier foods so kids can eat more nutritious meals.

The goal, say these members of the executive advisory council, is to give our children the tools to help them manage their weight now as students and in the future as fit-for-fighting members of America’s defense forces.