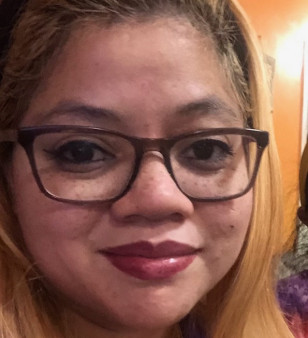 In the search for solutions to her uterine fibroids symptoms, New Jerseyan Lorraine Abudeye has learned to question what care providers say.

Ever since she began menstruating, Lorraine Abudeye, now age 32, experienced irregular periods with heavy bleeding. When she mentioned it to her general practitioner, he told her it was because her hormones were changing and that this was no big deal for a woman in her 20s. Then in 2015, she began feeling a relentless tiredness, no matter how much sleep she got. This chronic fatigue motivated her to go see her ob-gyn. A blood test revealed she had anemia, so he suggested she start taking iron pills. “But I was still tired, and my period was still heavy—to the point that I wouldn’t want to go outside because I was scared,” she says. “If I wasn’t going to be around a bathroom where I could check what was going on, then I wouldn’t go out.”

Abudeye’s doctor sent her to a hematologist next. The blood specialist prescribed different iron pills, and told her that, if those didn’t work, she would have to get blood infusions because her iron levels were so low.

Then Abudeye switched to a new ob-gyn, and an exam revealed the source of her problems. “As soon as he put pressure on my uterus, he told me, ‘You have fibroids,’” she says. “I’d never heard that and didn’t know what that was, so he explained.”

Statistics show that up to 80% of all women will develop uterine fibroids before the age of 50. These muscular tumors that grow in the walls of the uterus are usually benign (noncancerous). But fibroids can cause women to experience a number of unpleasant symptoms, such as heavy menstrual bleeding and pain.

Abudeye’s immediate concern was whether her uterine fibroids were cancerous. In addition, she wondered whether the fibroids would render prevent her from having kids. “I don’t have any children, so I asked questions because nobody had ever mentioned fibroids to me before,” she says. “At this point, I was 27, so you would think I would have heard of it before!”

After getting a sonogram her new ob-gyn ordered, Abudeye learned that the two fibroids she had were to blame for her heavy menstrual flow. “I’d lose so much blood during my period that I’d become anemic,” she says. “That’s how I initially found out.”

Her ob-gyn mentioned that the fibroids could be removed surgically but also warned her that they frequently grow back and could affect her fertility. He told Abudeye that having fibroids would make it harder to give birth. In addition, he explained that sometimes fibroids run in families. “But no one in my family, even distant family, had fibroids,” Abudeye says.

Nevertheless, Abudeye spoke with her mother and sister about the problem. “They hadn’t been through this, so they just advised me to make sure I was taking care of myself,” she says. “They were very supportive.”

In 2016, she had a myomectomy—a surgical procedure used to remove uterine fibroids via an abdominal incision. (A myomectomy removes only the fibroids and leaves a woman’s uterus intact.)

“I stayed in the hospital for two days and then went home,” she says. “Luckily, I was able to take time off work. My period was so much better after the surgery. Every 28 days, I got my period with no issues, and the flow was very light, and I felt almost no cramps. I thought, This is what a period is supposed to be like.”

After a few years, however, Abudeye’s period once again became irregular and the flow heavier. Her doctor confirmed that the fibroids had recurred. Now there were five of them. Abudeye considered her options and chose to go on birth control, one way her doctor said she could manage the condition. “I didn’t want to be on birth control,” she says. “But that was my doctor’s go-to solution. He’s never mentioned anything else.”

Abudeye says she’d heard that fibroids may be controlled with diet and hopes that either eating certain healthy foods or using some other method might help to manage the hormones that drive the growth of these tumors. “My periods are regular now because of the pill,” she says. “But am I going to have to be on the pill forever?”

The doctor advised Abudeye not to have the fibroids removed because they’d just keep growing. “He said, ‘When you decide to have a kid, then we’ll take them out.’”

Now that she’s 32, Abudeye is once again experiencing social pressure to have children. “The kind of stigma that has bothered me in the past is when people keep asking, ‘When are you going to have a kid?!,’” she says. “That’s made me feel like saying, ‘Hey, you don’t understand that it’s not so easy because you don’t know what our bodies are going through as women!’”

Last year, Abudeye reports, she lost about 30 pounds in an effort to improve her health. “This year, I hope to continue losing weight because I know being overweight affects your overall health.”

Prior to the surgical removal of her fibroids Abudeye says she looked bloated. But the procedure resolved that issue. “This time around, even though there are five of them, they’re smaller,” she says. “Now, I’m more aware of my body and know about the symptoms fibroids can cause. Luckily, I don’t have that bloated look.”

But she’s in search of other solutions to the problem. As a result of her initial experience years ago with her general practitioner, Abudeye doesn’t automatically accept what a doctor says. “Now, I do research for myself. Even if something changes just a little bit with my body, I ask the question ‘OK, what’s going on?’” she says. “Women should not be scared to look for real answers for themselves.”

Abudeye says that at her next ob-gyn appointment she will ask about a new drug she just learned was approved by the Food and Drug Administration to manage heavy menstrual bleeding.