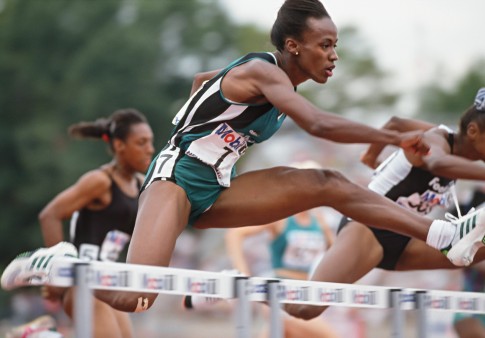 More about a sports legend in her own time

At 5 feet, 10 inches, Jackie Joyner-Kersee is a striking woman whose kind and caring spirit is readily apparent in the width of her generous smile, firm handshake and friendly gaze. Sports Illustrated for Women voted her Greatest Female Athlete of the 20th Century and ESPN named her one of its 50 Greatest Athletesof All Time.

Today, at age 54, Joyner-Kersee still holds the world record for points scored in the heptathlon (7,291), a seven-event track-and-field discipline in the Olympic Games that’s part of her sports legacy. She’s competed in four consecutive Olympics and won three gold medals, one silver and two bronze.

But Joyner-Kersee is also well known for her humanitarian work for a number of causes in the public health community. One of them is her partnership, last year, with pharmaceutical companies AstraZeneca and Sankyo Daiichi, launched to urge people to educate themselves about opioid-induced constipation, or OIC.

“I really want to help people and make them aware that there’s help out there and where they can go to educate themselves about OIC and that it’s a common side effect of prescription opioids,” she says. “There’s a blog for people who are dealing with OIC at OhISee.com where they can share their stories and maybe find tips that can encourage them to go see their doctor.”

Joyner-Kersee’s other work is in the African-American community and includes creating after-school programs for children and events for seniors that are organized at the center in East St. Louis she built and opened in 2000, which bears her name.

“We use sports as a hook to get our kids in the door to expose them to things they wouldn’t ordinarily experience, so we can try to help them become productive citizens,” she says.

Today, Joyner-Kersee remains involved with the sport that helped her do the work she loves in the black community. She joined the board of USA Track & Field in 2012.

When asked whether she’ll be at the Olympics in Brazil this summer, Joyner-Kersee flashes a huge smile. “Yes, I hope to be there,” she says, then pauses. “Watching.”