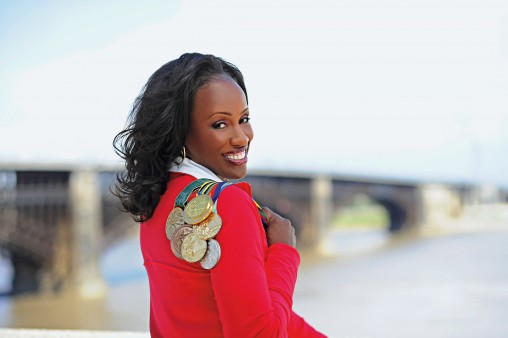 The Agony of Relief

Opioid meds are the go-to treatment for chronic pain, but as Olympic champion Jackie Joyner-Kersee and others have learned, these drugs can have distressing side effects.

(Scroll down for the Real Health TV interview with Jackie Joyner-Kersee.)

When you’re an elite athlete, you train long and hard with total dedication to your sport. For Jackie Joyner-Kersee, that sport was the heptathlon. This series of seven track-and-field disciplines saw her pushing to win. And she did, in 1988, setting and smashing records in the 100-meter hurdles, 200-meter dash, 800-meter run, high and long jumps, javelin throw and shot put. Today, Joyner-Kersee still stands as the undisputed queen of this grueling event. But along with the glory came suffering from years of athletic injuries. Joyner-Kersee found herself enduring chronic pain that lingered long after she achieved Olympic excellence.

To help manage the pain, Joyner-Kersee’s doctors placed her on opioid medication. Opioids work by suppressing the body’s perception of pain. But the meds triggered a slew of uncomfortable side effects. “I couldn’t go to the bathroom,” she says. Joyner-Kersee says these episodes often lasted for days, during which she’d feel “sluggish, bloated, in pain and not feeling like [her]self.”

The medical name for this condition is opioid-induced constipation (OIC), a commonly reported problem that many people bear in silence and don’t discuss with their doctors. Joyner-Kersee was no exception. “While the opioids helped manage the pain, I noticed I became constipated frequently, but I tried to ignore it,” she says. “However, it was taking such an emotional and physical toll that I finally worked up the nerve to talk to my health care provider.”

Symptoms of OIC can include fewer bowel movements, straining to pass stools, incomplete evacuation and feces that are too hard or soft. In addition, some people complain about bloating, abdominal pain and an inability to pass their waste despite feeling the urge to go to the bathroom.

Eventually, Joyner-Kersee says she had the “uncomfortable conversation” with her doctor, and “he realized that this was one of the side effects of the opioid medication.”

OIC results when opioids slow down peristalsis, involuntary movements of muscles in the gastrointestinal (GI) tract, where receptors to these meds are found. “The action of the opioids on the GI tract can also cause nausea and vomiting, which most patients overcome,” says Indra Cidambi, MD, medical director at the Center for Network Therapy in New Jersey. “But patients rarely develop tolerance to the adverse effects of opioid use related to constipation.”

Once she understood OIC, Joyner-Kersee talked with her health care provider about treatment options.

But besides OIC, opioid meds cause a number of other worrisome side effects. These painkillers can be highly addictive and they’re driving the current heroin epidemic that has become a national priority.

According to the Centers for Disease Control and Prevention (CDC), in 2012, health care providers wrote 259 million prescriptions for painkillers. One of them, a combination of hydrocodone and acetaminophen, is a narcotic pain reliever doctors prescribed to 119 million patients in 2014. CDC statistics show that 45 percent of people who used heroin were also addicted to prescription opioid painkillers.

Generally, under guidelines for acute pain management doctors prescribe opioids for only a specified length of time. “But the transition of pain pill users to heroin is defined less by time than by economics,” explains Cidambi. “Usually, physicians who were prescribing opioid pain pills to their patients stop prescribing them after a while, but the patient has become too dependent on the medication. That’s when the patient then turns to the black market to keep up the supply of pain medication, but they find that pain pills are expensive, going for $30 per pill, while heroin is much cheaper, at $5 per bag. Therefore, they switch to heroin.”

In general, heroin use has increased throughout the United States among men and women across most age groups and at all income levels, the CDC reports. Along with the uptick in heroin use are related overdose deaths of people from all population groups.

In 2013 and 2014, a number of celebrity deaths were reportedly caused by heroin or opioid overdose. Entertainer Chris Kelly (of the rap duo Kris Kross), age 34, and actor Cory Monteith, age 31, who starred in the TV show Glee, died by overdosing on a mix of heroin, opioid medications and other drugs. Actor Philip Seymour Hoffman, age 46, followed a similar path. He was found dead in the bathroom of his New York City apartment from an apparent heroin overdose, with a needle stuck in his arm. And, recently, opioids were linked to Prince’s death.

But as doctors tracked the epidemic of heroin overdoses, they began to see a pattern emerging. Across the country, fueled by cheap access to a plentiful supply of heroin, the number of people injecting the popular alternative to prescription opioids soared. In turn, this raised the risk of hepatitis and HIV.

“Every intravenous drug user with hepatitis C is likely to infect 20 others,” she adds, echoing statistics from the National Institute on Drug Abuse. “The saving grace is that there is now a new treatment option for hepatitis C.”

In addition to exploring new therapies for hep infections that result from injecting heroin, however, doctors are seeking ways to help patients steer clear of opiate abuse and the risk of overdose. Cidambi suggests that doctors come up with a therapeutic strategy in order to avoid overprescribing opioids to patients and risking the abuse of these drugs.

“For treatment with opioid pain relievers, a plan needs to be in place at the outset that could wean [patients] off opioid pain pills after a short period of time,” she explains. “I usually recommend 90 days, after which the therapy should be to switch the patient to nonaddictive medications.”

Cidambi’s 90-day plan includes an evaluation to spot warning signs that a patient is prone to addiction. She also believes doctors should dispense opioids to patients suffering from chronic pain only as a last resort.

If opioids are prescribed, Cidambi says, the 90-day rule applies, and patients must go see their doctor for an evaluation that determines whether the med is still necessary. “If a physican feels that the patient needs to continue to remain on opioid medication, the patient should be referred for evaluation to a psychiatrist for signs of addiction.”

The dosage of the drug should be lowered to wean the patient off the opioid to decrease the likelihood of tolerance or addiction, Cidambi adds.

Four years ago, a panel of experts urged the U.S. Food and Drug Administration (FDA) to require that doctors who prescribe powerful painkillers, such as oxycodone and fentanyl, undergo mandatory training to help arrest the epidemic of addiction and overdose involving prescription opioids. But the FDA rejected the panel’s proposal after the American Medical Association (AMA) fought it.

Recently, the FDA assembled a new panel of experts to reconsider the same issue. Once again, the AMA and similar medical groups were expected to continue their resistance to this proposal. According to a New York Times story, these organizations don’t want the government mandating how doctors practice medicine “for both ideological and practical reasons.”

In the meantime, Cidambi and other doctors who are concerned about the more troublesome effects of opioid treatment prefer a cautious approach to prescribing painkillers to patients who say they’re hurting. “The physician has to understand the patient’s pain, as opioid pills are not needed for all types of pain,” she says.

But many doctors also stress that, like Joyner-Kersee, there are lots of people who use opioids as prescribed and never have side effects of the kind that concerns Cidambi, as these meds can be safe and effective when used as directed.

As for Joyner-Kersee’s OIC, after she consulted with her doc, she underwent treatment for the condition. In general, doctors suggest lifestyle changes along with medicines and techniques to relieve constipation. What’s more, there are new drugs physicians can prescribe to counteract OIC without interfering with the pain-relieving benefits opioids offer.