Thirty years after this country’s first HIV/AIDS reports, stigma against people living with the virus persists. That’s why some children find a temporary home away from home—a home away from discrimination and prejudice—at summer camp. 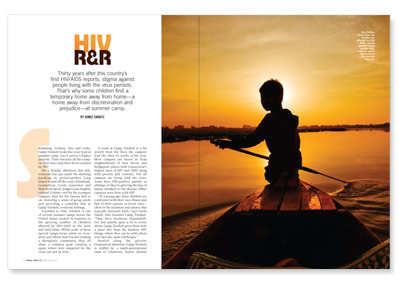 Swimming. Archery. Arts and crafts. Camp Totokett looks like your typical summer camp, but it serves a higher purpose. That’s because all the campers here have had their lives touched by HIV.

On a Sunday afternoon last July, everyone has just spent the morning kayaking in picture-perfect Long Island Sound off the coast of Branford, Connecticut. Lively counselors and their fresh-faced charges wear brightly colored T-shirts—red for the youngest campers, blue for the tweens and so on—fostering a sense of group pride and providing a reminder that at Camp Totokett, everyone belongs.

Founded in 1996, Totokett is one of several summer camps across the United States created in response to the growing number of children affected by HIV/AIDS in the early and mid-1990s. While some of these special camps focus solely on recreation and others lean toward creating a therapeutic community, they all share a common goal: creating a space where kids impacted by the virus can just be kids.

A week at Camp Totokett is a far stretch from the lives the campers lead the other 51 weeks of the year. Most campers are bused in from neighborhoods of New Haven and Bridgeport, places with Connecticut’s highest rates of HIV and AIDS along with poverty and violence. Not all campers are living with the virus. Some have HIV-positive parents or siblings, or they’re grieving the loss of family members to the disease. Other campers were born with HIV.

“At a young age, these children are confronted with their own illness and that of their parents or loved ones—often in the isolation and silence that typically surround AIDS,” says Linda Smith, who founded Camp Totokett. “They have enormous responsibilities and usually quite a lot to worry about. Camp Totokett gives these kids a place free from the burdens HIV brings, where they can be with others who face the same challenges.”

Nestled along the pristine Connecticut shoreline, Camp Totokett is staffed by a multi-generational team of volunteers. Senior citizens work alongside area high school students preparing and serving meals. A nearby community church provides financial support and the use of its waterfront property. By all accounts, Totokett is truly a labor of love. Just ask Tequea Landy.

Tequea, now 23, began going to Camp Totokett when she was 11. At the time, she was unaware that her mom had just been diagnosed with HIV—a secret designed to protect Tequea from being treated differently by friends and family. Because of stigma, many people involved with Camp Totokett hide their status from family, friends and neighbors. Many campers like Tequea are unaware that their families are affected by HIV/AIDS—in fact, some campers don’t even know that they themselves are living with the virus. 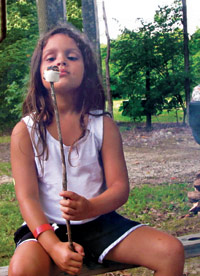 After Tequea attended camp, her mother disclosed her own status. Before her stay at Totokett, Tequea says, she was “very ignorant” about HIV/AIDS. At camp she got the support she needed to face how her family was affected. “When my mom told me she had HIV, I accepted her, of course, but I knew other people would not. I heard people and kids at school make stupid comments about AIDS and the kind of people who get AIDS, so I knew it was not something I could talk about,” Tequea says. “I’d never had much family support, but this made me feel even more alone. At camp you are accepted and loved 100 percent, and nothing can ever change that—not HIV, not AIDS, nothing.”

Camp offered Tequea an escape from more than just HIV. “It’s pretty tough to grow up where I did,” she says. “You don’t have a lot going for you. It’s not always safe, so you have to harden yourself. I used to fight a lot, basically with anyone who looked at me wrong. As soon as I got to camp I felt like I could leave all that behind and act silly like you’re supposed to in childhood. I’d like to say it’s home away from home, but really it’s the home I never had.”

At the encouragement of her counselors, Tequea began participating in the camp’s year-round teen leadership programs. Counselors also encouraged her to empower herself by getting involved with community-based programs to prevent teen pregnancy and stop the spread of HIV. One counselor even paid for Tequea’s first year of college. “[Normally,] people didn’t expect me to prosper because of where I come from. But at camp, they saw something different,” Tequea says. “I finally felt supported, so I began to grow, to thrive. I see what I’m capable of now, and I am able to make something of my life.”

Like many campers and counselors at Totokett, Tequea says the best moments of her life have been at camp. And she has returned as a counselor to the kids. “I’ve been in their shoes. If I can make their life better like people did for me, then that’s what I’m here for,” Tequea says. “I didn’t have a childhood, but it doesn’t have to be like that for them.” 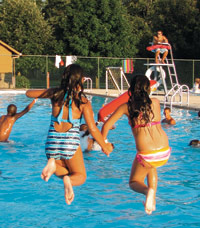 A Shared Experience
Today, an estimated 33.3 million people are living with HIV/AIDS worldwide, and there is an entire generation of young adults who have never known a world without the disease. Rob (who prefers not to give his full name), an 18-year-old counselor and former camper at Camp Sunrise—another camp for kids affected by HIV, based in Columbus, Ohio—is among them.

Like many children born with HIV in the 1990s, Rob was not expected to live beyond childhood. But thanks to the development of powerful HIV-suppressing drugs, the outlook soon began to change. “I was given six months to live way back when I was little, but here I am today. My nurses say it’s a miracle that I’m so healthy, and people who know about my disease say you can’t even tell something is wrong with me,” says Rob, now a college student. So far, he has beaten the odds, although living with a compromised immune system means that normal illnesses could knock him down for weeks.

Other odds are challenging too. Rob also had to handle the social consequences of HIV stigma. “Where people are educated, the perception of HIV/AIDS has improved,” he says. “However, I still face ignorance. It is not directed at me, but it still bugs me that I have to live in a world where a joke about AIDS/HIV is considered humorous.”

Rob began his education about HIV and its stigma at a young age. When he was 5, he started attending Camp Sunrise, along with his brother and sister. Like Tequea at Totokett, all three siblings went on to become volunteer counselors at Sunrise.

Originally founded in 1994 to serve children affected by AIDS, Camp Sunrise has had to adjust as a generation of kids who were not expected to see their 10th birthday are now living into adolescence and beyond. In addition to regular camp activities, Camp Sunrise teens take part in leadership- and skills-building activities. There is also plenty of downtime to hang out with friends. Surrounded by peers who know exactly what they’re going through, teen campers often divulge their most guarded secrets while gathered around a campfire.

“I wish I could tell everyone [my status] and have the exact same social life I have now. But that’s not possible,” Rob says. “How people react can be overwhelming—like, ‘Whoa, I’ve known you this long and you have AIDS?’” Outside of Camp Sunrise, Rob has disclosed his HIV to five people. Two remain close confidants; three he never heard from again. 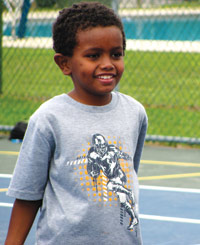 Rob seems to take these losses in stride, relying on his Camp Sunrise friendships to help him cope. “I have had some of the best conversations I will ever have about HIV/AIDS at camp, whether it be about how we deal with the virus or the stigma surrounding it,” he says. “Sunrise is the one place where you can share your feelings. Camp Sunrise is the reason I do not look at myself with shame.”

Cheryl Foley, RN, Camp Sunrise’s executive director, calls Rob’s experience typical. “A lot of these kids have pretty lonely lives outside of camp,” she says, “mostly because the secrecy around HIV/AIDS still keeps them isolated in their schools and communities. One of the most common things we hear is that they don’t have many people they trust or consider friends outside of camp. They have few people to talk to.” And that gives rise to the camp’s mission. “Our goal is to create an environment where they can experience the joys of friendship without fear,” Foley says. “For many of these kids, these friendships become so important that they maintain them year-round.”

Asked whether it makes sense to direct funds and resources to camps like Sunrise and Totokett instead of toward medicine and other necessities for people living with HIV/AIDS, campers and staff alike give a resounding “Yes!” Rob explains in a teenager’s terms: “Camp Sunrise has the magic of Disney World and the love of a family. These camps show the children their reality does not have to suck.”

HIV/AIDS by the Numbers
HIV camps will be present until the epidemic is past.

In 2009, the last year surveyed, 3,022 children younger than 13 were living with HIV/AIDS in the United States; 707 of them were diagnosed with AIDS. In the same year, 660,062 adults and adolescents older than 13 had HIV and another 479,161 had AIDS. In total, the Centers for Disease Control and Prevention (CDC) estimates that about 1.2 million people in the U.S. have HIV—and that one in five don’t know their status.

The number of children living with HIV has fallen sharply since the use of HIV drugs to reduce mother-to-child transmission of the virus. However, African Americans and other ethnic and racial groups have been disproportionately affected since the dawn of the epidemic—a disparity that has only deepened.

In 2009, for example, black teens represented 17% of the U.S. teenage population but more than 70% of HIV cases in their age group. And black children account for more than 75% of diagnosed cases but represent only 15% of the total U.S. population younger than 13.

Even more troubling is that many African-American teens are only diagnosed late in the course of HIV, when it may be too late to fully benefit from HIV treatment. One recent study showed that 20% of African-American youth progressed to AIDS within one year of receiving an initial HIV diagnosis, compared with 14% of their white counterparts.

For more information on HIV/AIDS, go to poz.com.