Back to the Land

To avoid diet-related health problems, some say African Americans should return to our traditional way of eating. 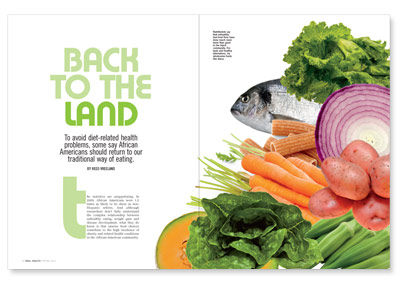 The statistics are unappetizing. In 2009, African Americans were 1.5 times as likely to be obese as non-Hispanic whites. And although researchers don’t fully understand the complex relationship between unhealthy eating, weight gain and disease development, what they do know is that unwise food choices contribute to the high incidence of obesity and related health conditions in the African-American community.

In response to this health crisis, a group of historians and dietitians proposed that black people return to eating the way their ancestors did. They created the African Heritage Diet Pyramid, a tool to help African Americans reconnect with the healthful culinary traditions of the African diaspora—eating foods from not only the African continent but from the American South, the Caribbean and South America.

The pyramid incorporates staple foods such as sweet potatoes, okra, eggplant, and rice and beans, as well as leafy green vegetables such as collard greens and spinach. In addition, the pyramid’s base stresses being physically active and using mealtimes as a way to enjoy socializing with others.

“This is a food pyramid that would help somebody decrease their chance of illnesses, such as cardiovascular disease and hypertension. But it’s one that’s rooted in our own culture and history,” explains Frederick Douglass Opie, PhD, a history professor at Babson College in Wellesley, Massachusetts.

Opie is a culinary historian tapped by Oldways, a nonprofit, health-focused organization that received a grant to develop the pyramid almost one year ago, to be on its experts panel. According to him, as recently as 75 to 100 years ago, obesity was extremely rare among African Americans. The reason? Because African Americans were essentially an agricultural people, and “they lived in an environment where your basic necessities required you to exercise and move,” Opie says. “To have good health, you must have a combination of holistic food [and lifestyles] along with exercise.”

At the start of the 20th century, many African Americans did just that. They could walk outside and pick what they’d eat right from their garden. That means the vast majority of a person’s diet came from locally grown plants.

Today many African Americans no longer have a direct connection to that agrarian heritage, especially those who live in inner-city areas that are virtually fresh-food deserts. In these neighborhoods, produce isn’t widely available. Often, the only easily accessible meals are unhealthy fast foods—a long way removed from the nutritious plant-based diet of an agricultural people. “A lot of folks don’t have access to fresh fruits and vegetables because of their economic situation,” Opie observes. “But you’ve also got a generation of people who just don’t know what it means to grow their own food, who aren’t exposed to rural farm life. That makes a big difference.”

The edible foundation of the African Heritage Diet Pyramid shows foods that every meal should have. Its base includes the leafy greens previously mentioned as well as mustards and turnip greens. Stacked on top are whole grains such as brown rice, along with beans, nuts, fruits and tubers such as sweet potatoes and yams. Above these, there are spices and herbs used in different cultures’ cuisine to make marinades and traditional sauces. Fish and seafood follow, then eggs, poultry and other meats. Oils are listed too, but only healthy ones, such as olive, sesame, canola, red palm or extra virgin coconut oil, for use in small quantities.

Nutritionists recommend that families and individuals who want to adhere to the African Heritage Diet include several meals with fish or seafood into their weekly meal plans. It’s also advised that certain meats, such as beef, pork and chicken, be eaten less frequently and in smaller portions. This is the way people ate these special-occasion delicacies so many years ago. “Most people used to eat fried chicken only on Sundays—that’s why it’s known as the Gospel bird,” Opie explains.

Back then, large portions of meat weren’t generally consumed on a regular basis, and neither were cakes, pies nor desserts. But sweet, fatty and rich foods that used to be reserved for special occasions are now often indulged in daily, or maybe several times a day. “Eating cakes, pies and desserts every day just wasn’t a reality for the majority of people,” Opie says.

But trying to change your dietary habits is hard for most everyone, even if you have access to fresh produce. Tosha Baker, 34, heard about the pyramid from a coworker and is trying to follow its directives. Baker grew up in Fort Worth, Texas, but now lives in Boston. There, she is a nutritionist for a Women, Infants, Children (WIC) program at a local hospital.

Baker’s grandparents were farmers—her father’s parents were sharecroppers, and her mother’s parents owned their own farm—and she has fond memories of their garden. “They had a little parcel [of land] set aside where they grew hot peppers, bell peppers, lots of greens, tomatoes, crookneck squash, zucchini, beans, purple-hoe peas, black-eyed peas and other vegetables,” Baker recalls. “We ate a lot from the garden when I was younger and we went there to visit.” 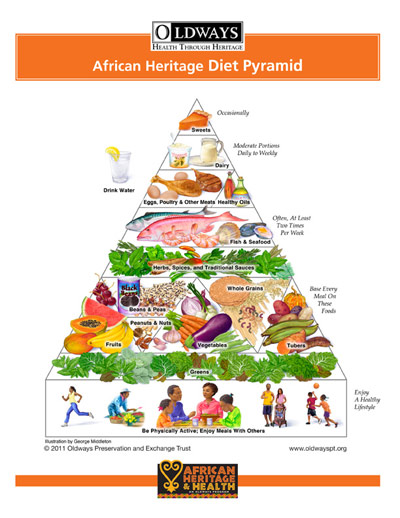 Sometimes there’d be fresh eggs or meat, chicken or fish too. “But I do recall many times when greens were the main [component of the] meal,” she adds.

Baker is also finding more ways to be physically active despite a hectic work schedule. She has made an effort to walk at least one hour each day. To get her walk done, she gets off the train several stops early while commuting to or from work. Because she lives in a city, Baker doesn’t own a car. “I definitely can say I feel better when I follow this diet and add in more vegetables, whole grains and fish,” she says.

For Baker, the most difficult thing about the African Heritage Diet is eating sweets in moderation. “I’ll get a craving for ice cream and other snack foods,” she admits. But even this is manageable. Baker found that tasty, more healthy and natural alternatives can satisfy her cravings. So instead of indulging in a candy bar she’ll mix together different nuts, dried cranberries or pecans, or she sautés an apple with a bit of cinnamon, brown sugar and some raisins.

“I’m not saying I succeed [in eating healthy] all the time,” Baker says, “But I’m mindful of it.” Because this awareness has helped Baker feel better about her health, she’s also spread the word about the diet to her family and friends.

For their annual family reunion, Baker’s goal is to introduce family members to the African Heritage Diet. “There’s always lots of food [at the gathering],” she says. “But there are more vegetables on the menu now.”

Baker notes that although her family has agricultural roots, many of her older relatives developed hypertension and diabetes. She thinks this might be because her aunts and uncles grew up eating farm produce but moved away from home and became too busy with work and raising children to focus on their diets. Now, some of Baker’s younger cousins are starting to change their eating habits. “Our family has been receptive to it,” Baker says.

But helping others transition to the African Heritage Diet is challenging. Some people don’t understand why it’s healthier to cook with olive oil instead of butter, or how affordable the diet is and that both fresh produce and frozen veggies are great to use. For some, it may be helpful to teach them how to shop for healthier groceries. Another way to inspire others is to serve them a nice meal, or, as Baker discovered, transform high-calorie recipes into healthier alternatives and offer folks a taste.

Baker keeps the African Heritage Diet Pyramid in her kitchen and uses it as an ingredients list when planning her meals, but she knows some people won’t respond to it like her. Still, she’s optimistic. Says Baker, “At least you planted the seed, so they may come back to it later.”

In June 2011, the U.S. Department of Agriculture (USDA) unveiled the familiar visual of a plate to illustrate five essential food groups—fruits, vegetables, grains, protein and dairy—and how much of each we should eat.

Previously, the government used a pyramid (MyPyramid) to categorize food into groups. But MyPlate’s simpler message has been far more popular: If you fill your plate with foods from each group in portion sizes as shown, then you’ll get the healthiest nutrients and avoid overeating.

Essentially, that means half your plate should consist of fruits and vegetables, the other half grains (whole and refined) and protein. What about quantity? That depends on age, sex and level of physical activity. But what’s also key is instead of eating until you’re stuffed, eat until you’re satisfied. (For example, one oversized restaurant plate has enough food to feed two people, so no need to clean your plate in that instance!)

For more details, visit ChooseMyPlate.gov. The site offers healthy options to get the proper nutrients. For example: When it comes to carbohydrates, whole grains such as grain-based cereal or brown rice or whole grain pasta have the most nutritional value; for dairy, skim and 1 percent milk are the healthiest options; for protein, choose seafood and lean or low-fat meat and poultry; and for seasonings, sprinkle on tasty herbs and spices instead of salt.

What’s best about MyPlate? This simple visual offers a deeper understanding of nutrition and how to balance calories to avoid just mindlessly filling your plate.

Cases of a Brain Pressure Disorder Are Escalating