The natural hair movement is spawning a debate about self-esteem and black identity. 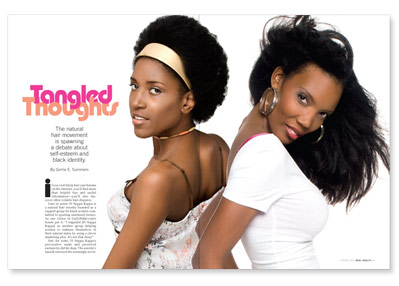 Case in point: Pi Nappa Kappa is a natural hair sorority founded as a support group for black women committed to sporting unrelaxed tresses. As one visitor in CurlyNikki.com’s forum put it, “I regarded [Pi Nappa Kappa] as another group helping women to embrace themselves in their natural states by using a clever marketing ploy. It’s not that deep!”

But, for some, Pi Nappa Kappa’s provocative name and perceived exclusivity did hit deep. The sorority’s launch renewed the seemingly never-ending debate about natural hair versus relaxed hair.

“In the African-American community, hair has everything to do with our identity, and identity issues are a huge topic of concern in African-American culture,” says Soroya Bacchus, MD, a licensed physician and triple-boarded psychiatrist in Santa Monica, California. “African Americans need to be happy with who they are, and an unhealthy focus on how their hair looks can lead to further issues of low self-confidence and self-esteem.”

Although American society definitely still exhibits bias against and ignorance about natural hair styling options, these negative attitudes hurt even more when they’re expressed by others in the black community.

Del Sandeen, About.com’s black hair guide, hasn’t had many problems with having natural hair. But she freely admits her family is “very Southern and into ‘good hair.’

No doubt a good portion of our self-esteem (or lack of it) begins in the home. “It starts with setting a good example for your children, and pointing to good role models for them to admire,” Bacchus says. “African-American parents need to demonstrate self-confidence themselves so their children model that behavior and in turn become confident with their own identity. I’ve seen 4-year-olds worry so much about their hair that they have it chemically straightened. Obviously, there is a huge identity issue [related to hair texture] in the African-American community.”

For some women, like Sandeen, many hair issues spring from ignorance about how to work with black hair. But natural hair care websites and groups offer service, support and tips to women who want to learn more about how to handle their hair.

Although Sandeen says she’s received no negative feedback from anyone since returning to her natural texture, she did come across other challenges, such as how to style and maintain her healthy natural hair. Gradually, Sandeen learned what her unrelaxed tresses needed. But during the process, she noticed something else. Some sistas who’d gone natural seemed to adopt a superior attitude toward women with straightened hair.

What’s more, debate about the topic has triggered heated discussions online. A woman signed in as “Donna” in the CocoandCreme.com forum commented that there “should be a point when being natural becomes a natural (pun intended) part of your life and more second nature than something you have to learn to embrace.”

Another visitor, “Just Hair,” expounded on the underlying conflicts in the hair debate: “The crazy assumption that women wearing relaxers or weaves [are doing so] out of some sort of self-hate is absurd. I was not some enlightened being when I kept [my hair] 100 percent natural.”

Sandeen has followed some of the exchanges in a number of hair care forums. She observed that many of the naturalistas who criticized women with relaxed tresses were relatively new to wearing their hair natural. “There tends to be a great sense of empowerment when you leave relaxing behind,” Sandeen says. “And I think some women get caught up in that feeling so strongly that it translates into a feeling of superiority toward anyone who still straightens her hair.”

For Sandeen, after 11 years of sporting natural tresses, she really believes hair is just something covering your head. “I don’t believe that a woman with a ’fro is more ‘down for the cause’ than a woman with a relaxed bob,” she says. “You need to get to know someone before making a judgment like that.”

But out of the very vocal disagreements some healthy responses to the issue have emerged. “My best advice is to really focus on true [inner] beauty, rather than the aesthetics [of outer] beauty,” Bacchus suggests. “I would encourage people to look at the bigger picture, and really be vocal about their opinion and engage in discussions about why we really care so much about our hair. People who make a big deal over such a small issue draw away focus from what’s more important: building a positive self-image.”

Is Race a Factor in Hair Damage and the Onset of Gray Hair?