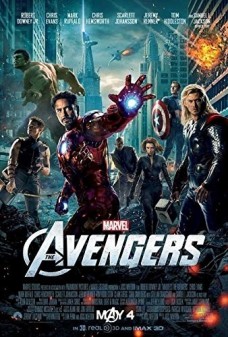 Going to the movies is my most enjoyable form of entertainment and one of my favorite dating activities. My second favorite is bowling but I think I only got to bowl twice in 2012. As you may know I am an award winning filmmaker so I always like to take one blog to list of top movies of 2012.

1. Avengers. Man I didn’t see this coming. What a buildup. 2 Hulk movies, 2 Iron Man, a Thor and Captain American all good and then they pull off all of them in one movie. Wow comic book movies are a dominant force to be reckoned with now. Two words “Hulk Smash.”
2. Django. I was too excited when I saw the cast at comic con but once the hype kicked in my anticipation grew. I think all of the talk about the movie made me appreciate it more. This is not my favorite QT movie but the theater was a thrill.
3. Underworld Awakening. I love this series. I love the coloring of the picture. This was an exciting story. Maybe the best of the franchise for me. I can’t wait for the sequel.
4. Chronicle. This was a surprisingly good movie. I love the imagination of the story. What kid has imagined getting super powers to fight off a bully. There are so many teen movies with characters doing stupid things.
5. Judge Dredd. I want this movie to be my number one because I love the setting. This was a real feeling depiction of the future. I love my man Wood Harris in the movie. I could live in this future and I don’t know why I feel like that. This JD movie made me watch the first JD movie with Sylvester Stallone. I hope there will be more JD movies.
6. Hunger Games. I think I have a crush on Jennifer Lawrence. I read all three books and they were hot. I love the world. I think the only drawback was that it was a PG film. I would love to see a more gritty version like the old b/w Lord of the Flies.
7. Skyfall. This could easily have been my number one movie but as good as it was I wanted more. I love the way the story uses multiple cities and its grand plots of 007 movies. The only thing I missed in this story was more from the villain. I don’t think they showed as much of the villian’s lair as they could of. I don’t exactly know what it was missing but it missed something.
8. Spiderman. This was a HOT movie. I had been reading the Black Spiderman comic all year and I would have loved for them to be that bold with the film. This was an exciting Spiderman movie and it didn’t have a long act two with a corny love story.
9. Lockout. This was my sleeper movie of the year. Every year needs a few movies that you don’t see coming. It was a good use of an hour and a half. Scifi always takes my mind away from the problems of the world. They need to do more stories like this. I would to see the Stars Wars books Death Troopers as a film.
10. The Man with the Iron Fist. Quentin Tarantino is on my list twice. This was a good blood and guts movie. Of course The Rza directed the movie so he gets the credit but QT helped him. This was probably the best America Kungfu movie ever.
11. Total Recall. I loved this movie. All of the movie on my list are great. I can’t wait to see this movie again on DVD. I loved the first movie with Arnold Schwarzenegger it was my second favorite Arnold movie. What I liked most was they didn’t change the movie too much but just enough to make it interesting.
12. Redtails. I still enjoy watching this movie. I wonder what it would have been like if they would have made it bloody like Django. They killed white people and enjoyed doing it. I just think if they would have showed someone doing it would been a “Hella Different” (as the lady in the HBO series Girls says). Django has changed the game now. I want to see my bloody revenge and war stories now.

That was my top ten and here are the rest of the movies I liked from 2012. Not in any particular order.
Safe House
Think like a man
Abraham Lincoln Vampire Slayer
The Raid
Bourne Legacy
John Carter

Here are some movie I wanted to see but didn’t because of schedule.
Ted
Sparkle
Project X

Movies that should have made my top 10 but were big let downs. They were all franchises I LOVED. I even read the Hobbit because I was so eager to see it. Sequels have let me down before but last year there were so many. They weren’t horrible but they were nowhere as good as the other movies in the brand.

* Dark Knight. Bane was too small. In the comic he was twice the size of Batman. This was a great role for the Rock.
* Taken 2. There’s no way I can get into a Taken sequel where the wife doesn’t apologize for hating on the hero father.
* Prometheus. An octopus alien! What! This was a prequel to the prequel.
* Resident Evil Retribution. This was a forced sequel along the lines of the Friday the 13th movies.
* The Hobbit. How do you follow a bloody rated R movie trilogy with a PG movie? This should have been a TV series.

As I always do in preparation to writing this blog I review my selection with my wife and son. This year they wanted to share their top movies.

First up my son’s top ten is.

My wife’s top movies were.

It’s a dag on shame that Batman is my favorite superhero and Dark Knight Rising did not make my top ten.

Here is our list of 2012’s movies, I’d love to hear yours. coachyojeff@gmail.com Yo Jeff