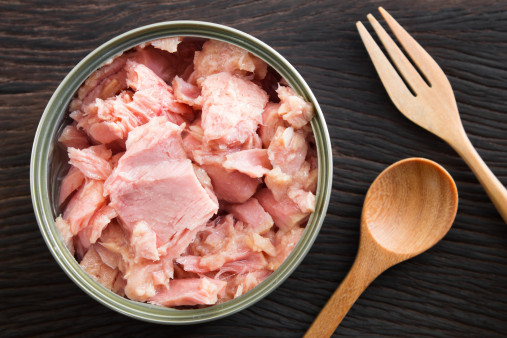 When it comes to mercury content, what type of tuna is the safest to eat and in what amounts?

In the United States, canned tuna is the second most popular seafood product after shrimp, according to the National Fisheries Institute’s Tuna Council. Tuna is rich in protein, low in fat and calories and a great source of essential omega-3 fatty acids, a nutrient known to help lower blood pressure and cholesterol. But canned tuna is also a common source of mercury, so knowing how often to eat this fish and in what amounts is key.

The Environmental Protection Agency reports that almost all exposure to mercury occurs when people eat fish and shellfish containing methylmercury, an extremely toxic organic compound. In excessive amounts, mercury can cause the loss of peripheral vision; tingling in the hands, feet and around the mouth; impairments to speech, hearing and movement; and muscle weakness.

Scary? Yes, but if you follow certain guidelines, you can safely eat tuna safely and minimize these ill effects.

In addition, the NRDC recommends that women who weigh 130 pounds or less limit themselves to about two six-ounce cans of light tuna per week and that women of childbearing age should not consume more than four ounces of albacore or yellowfin tuna per week.

For children, the NRDC’s rules are a tad stricter. Kids who are 4 or 5 years old are limited to eating about four ounces of light tuna each week and no albacore or yellowfin tuna.

As a service to the public, the Environmental Protection Agency (EPA) teams with the Food and Drug Administration to list fish advisories issued by federal, state, territorial or tribal agencies. These recommendations inform consumers about contaminated fish caught in local waters.

However, for most people, the risk of eating fish containing mercury is not a health concern. The EPA stresses that tuna and other fish are a rich source of nutrients and safe to consume in the recommended quantities.