Why yoga belongs in your HIV treatment plan

In the 1990s, Jon Kaiser, MD, an HIV specialist in San Francisco, recognized that people living with HIV required more than just prescription drugs doled out by doctors. Coping with this chronic illness that was once considered a death sentence called for an effective way to address the multitude of physical and mental problems those with the virus battled each day.

The author of Healing HIV: How to Rebuild Your Immune System, Kaiser was ahead of his time. In general, he felt that living well with HIV necessitated a more holistic approach to improve treatment outcomes rather than exclusive reliance on antiretroviral medications and other drugs. He believed that the best approach for promoting healing from life-threatening conditions involved a mix of complementary medical and natural therapies.

“Healing comes from inside. That’s why I strongly recommend that patients with HIV take time each day to practice deep relaxation,” Kaiser says. “Yoga quiets the mind, improves breathing and circulation and reduces stress. Daily practice can help support the immune system in conjunction with a comprehensive HIV treatment program.”

Research suggests that people with HIV/AIDS suffer from increased anxiety and depression triggered by chronic illness and the stigma that still surrounds HIV. Furthermore, the current political environment of uncertainty compounds the stress many of these individuals feel.

But studies show that yoga can help lower emotional anxiety, which might slow the progress of the disease. What’s more, yoga and meditation are considered mindfulness-based interventions (MBIs) that are ideal for reducing stress, which can burden the immune system.

Briefly, MBIs focus on being aware of your thoughts, feelings and experiences in the present and accepting them without judgment. Several small randomized controlled trials and pilot studies show that mindfulness-based stress reduction programs reduced feelings of worry and apprehension and improved CD4 counts in people living with HIV.

Abbie Daven, a yoga instructor based in the United Kingdom, cautions that those with medical conditions such as HIV/AIDS should first check with their doctors before they start yoga or any new physical activity. “With that out of the way, the many physical and emotional benefits will depend on the individual,” she says. “Just the relationship between movement and improved mood is an important one. Yoga at its core is a mindfulness practice, and its ability to relieve stress and depression is quite well documented.”

Experts believe that physiologically, the effects of breathing from the diaphragm on the vagus nerve (the longest cranial nerve in the body) and, subsequently, on the entire system can alleviate stress, depression and anxiety, as well as support the immune system and reduce inflammation. “For people living with these conditions, I would suggest meditation and breathwork [pranayama] to encourage this deep, mindful breathing,” Daven says.

According to the American Yoga Association, although yoga can’t replace professional counseling as a therapy to relieve severe distress, when done every day, the exercise, breathing and meditation techniques practiced during yoga can help increase energy levels and feelings of well-being. 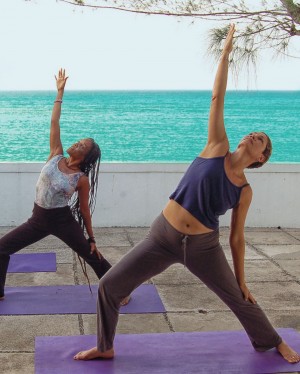 Courtesy of Jamaica Inn (Model(s) used for illustrative purposes only)

Yoga inversion poses, such as headstands and shoulder stands that involve turning upside down or bringing the head below the heart, are thought to increase the flow of blood and energy to the thymus. This gland helps populate the immune system with T cells that can attack and kill invaders or help activate other cells to destroy infected cells, as well as police rejected cells that would otherwise cause autoimmune problems.

For depression sparked by side effects from HIV medications and the everyday burden of living with the virus and its associated disorders, yoga meditation is a way to manage low spirits and many other issues. For example, “If all you want is silence and you feel amazing doing a less physical practice, then meditate,” Daven recommends.

She suggests that those new to yoga shop around to find a style they like. “Certain styles of physical practice will suit different people at specific stages of their lives,” Daven says. “There are so many different kinds of physical styles, incorporating different degrees of meditation and breathwork practices. Don’t be afraid; like anything new, it might be a bit scary and awkward at first, but with practice you improve.”

The relaxation achieved by yoga poses (asanas) also helps reduce the stress on the immune system. A student who participated in a past study reported that practicing yoga made her listen to her body more than she’d previously done. In addition, she felt that yoga helped her concentrate more on life than on death.

In an article in Yoga Journal, one woman with the virus likened living with HIV to being caught in a hurricane, and practicing yoga helped her descend deep below the waves of the storm to find calm. “As debilitating and emotional as HIV is, yoga helps me transcend it so that I can rediscover myself,” she says.

Many patients turn to yoga to manage the side effects from various drugs in their regimen. Some patients modify the yoga postures, depending on how they feel each day. A number of them find that yoga provides relief even if they can’t do everything they formerly did.

One man who was troubled for a year with unpleasant chronic reactions to HIV meds says that after he incorporated yoga into his life, an hour of restorative poses each day made him feel “like a new person mentally, spiritually and physically.”

Daven recommends that beginners work with a qualified instructor, at the start, so they learn to practice yoga correctly. “Find a teacher either online or in person whose approach makes you feel welcome and safe,” she says. “That will make things easier so you want to go back.”

Start with the type of yoga you like and progress at your own pace. “There is no one-size-fits-all when it comes to yoga,” Daven says. “I don’t like to tell people how often to practice yoga or the next steps to take with it because that just adds more unnecessary demands to people’s lives. I try to offer a little of all facets of the practice at the appropriate times, and then students can choose to pursue more of what works for them. The good thing about yoga is that the more you get into it, the more often you want to practice.” 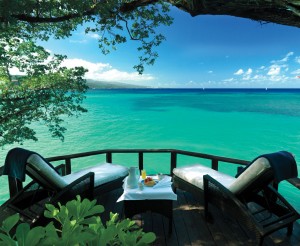 But Daven also warns that prospective students—those living with HIV and those who aren’t—should approach yoga realistically. “I think due to the influence of social media and, sometimes, the competitive, image-driven world we live in, yoga has, unfortunately, developed a bad rep,” she says. “People either see it as unattainable acrobatics for the blessedly bendy or a practice in the realm of chanting hippies waving incense. Yoga is all of this and none of it because it’s a very personal thing.”

The ancient art, according to Daven, allows you to explore yourself, the body, the mind and, maybe, achieve a connection with something deeper.

“The postures are a method of focus, a means by which you learn to control your breath and your body and a way to remain present in the face of discomfort,” she explains.

What’s more, yoga isn’t easy. “Yoga shouldn’t cause injury, but it’s supposed to be a challenge,” Daven says. “It requires discipline and effort because that is the only way to change and grow. Restorative yoga and meditation are hard; it takes effort to focus your mind and breathe while in the same awkward shape for long periods.”

Many people living with HIV have tried yoga as part of their efforts to find relief that they didn’t get from medicine, and many of these same people conclude that attempts to master the art are well worth the struggle.

This is why those who have benefitted from Kaiser’s approach may feel compelled to offer the doctor a resounding “Namaste!” in gratitude.

Practice yoga in an unforgettable surrounding.

In Ocho Rios, Jamaica, amid the crystalline turquoise waters of the Caribbean Sea, tropical flowers of every hue offer a colorful contrast to the blue and white cottages on the grounds of the Jamaica Inn. At this first-class resort, folks can indulge their minds and bodies in the restorative power attributed to yoga, a practice that originated in India 3,000 years ago.

For those seeking to take advantage of yoga’s focus on relaxation and meditation in this paradise of green spaces and gentle breezes, yoga classes are held in open-air rooms at the hotel and on the beaches. These inspirational locations are where yoga instructors, such as Abbie Daven from London, lead guests through workouts that challenge and motivate participants to relax. 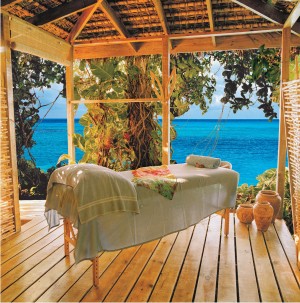 Yoga sessions start at sunrise and continue through sunset. Often, beginners feel intimidated. “I feel yoga is one of the few things people think they should be able to do before they’ve even set foot inside a studio,” Daven says.

Its many therapeutic benefits make the practice worth mastering. “There exists an indisputable connection between a person’s overall physical and mental health and the inner peace and well-being yoga is designed to achieve,” says Catherine Woodyard, a researcher from the University of Mississippi.