Like many young black girls, actress Naturi Naughton took years to become empowered enough to look in the mirror and fully appreciate what she saw reflected there. 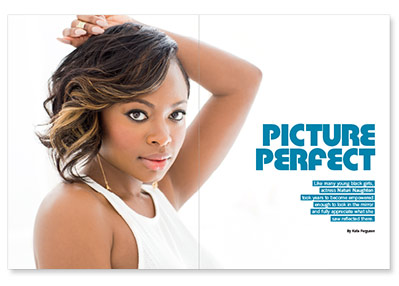 Click here to read a digital edition of this article.
“There’s constant rejection in this business,” says Naturi Naughton, the petite star who plays Tasha St. Patrick on the hit STARZ cable  TV series Power. ”There’s not enough people telling you that you have great qualities. It can be disheartening, and it can be hard. I still go through that. I’m in a very hard business.”

Although Naughton is as unlike Tasha as day is to night, the actress relates to her character in certain ways. “Tasha is the character who loves to wear the sexy, tight dresses and who’s always concerned about her body image and being the sexy wife for her husband,” Naughton says. “I connect with that because I’m still negotiating feeling confident about my shape.”

As Naughton speaks, the afternoon sunlight filters through the windows of her temporary home, an apartment on one of the upper floors of a modern high-rise in Brooklyn, New York. The building sits a few blocks away from the stalwart presence of the Manhattan Bridge, which connects the two boroughs. The view from her windows is magnificent, and you can see for miles in any direction. But the panorama doesn’t distract Naughton as she recalls her adolescent years.

“When I was a teenager, I was in a girl group called 3LW,” she says. “At that time, I was dealing with feeling like my skin color wasn’t beautiful because, in that music industry environment, only a certain look was popular.”

Naughton says it took her years to really embrace the beautiful chocolate color of her skin and her features. “I’ve got full lips, and have been told my look is great,” she says. “But it wasn’t until I was in my 20s that I could really appreciate and feel good about myself.”

Indeed, a slew of studies have focused  on how skin color affects the self-esteem of African Americans and other people of color who live in the United States. The skin color bias Naughton internalized that’s present in the African-American community is called colorism. The term was coined by Alice Walker, who wrote the Pulitzer Prize–winning book The Color Purple. Walker defined colorism in an essay titled “If the Present Looks Like the Past, What Does the Future Look Like?” that appears in her book In Search of Our Mothers’ Gardens: Womanist Prose.

In the essay, Walker discusses the division between light-skinned and dark-skinned black women, saying that unless the issue is addressed, “we cannot, as a people, progress.” Naughton believes color, looks and features are still issues we’re struggling with in our community. “That’s just something I think we’re all going to have to pray about because it doesn’t just go away overnight,” she says.

But Naughton also believes that, today, the beauty of black women of all hues is being acknowledged, accepted and appreciated in the public consciousness. To make her point, Naughton points to organizations such as Black Girls Rock spreading its message of self-love, Oscar-winning actress Lupita Nyong’o, celebrated for her dark beauty and style, and the acknowledgement given to Kerry Washington, star of the hit TV show Scandal, as a modern beauty and fashion icon.

“Whitney Houston was my inspiration because I’m from East Orange, New Jersey, and so was she,” Naughton says. “I grew up watching this wonderful, beautiful black woman achieve success and greatness, and it really clicked in my head that if she could be beautiful and accepted, maybe I could too. I think things are continuing to move toward a better, more confident place, so I feel encouraged.”

But the continuing issue of colorism remains worrisome, say black mental health experts. According to “On Dark Girls,” a recent paper published by the Association of Black Psychologists, when racist stereotypes and attitudes are adopted as truth and believed by those on the receiving end of the lies, “a heavy price is paid by all members of  the black community.”

Despite the damage caused by these insidious and lingering lies, Naughton says she feels a lot more optimistic as popular culture continues to redefine society’s standards of beauty in a more inclusive way. But in Hollywood, she says, change is slower in coming. “I deal with it every day because I’m on the audition scene and constantly going for roles and trying to knock down doors and getting people to see me as someone they should hire,” she says. “Even though the industry is opening up more, I think Hollywood is still challenging.”

Nevertheless, Naughton plucked a few plum roles that supported her mission to nurture self-esteem. When she was cast as hip-hop star Lil’ Kim in the movie Notorious, Naughton was thrilled. “What a confident, sexual being!” she says. “I’m nothing like that. I’m still kind of demure and insecure and shy and worried about if I’m good enough. But I think the arts is a way to bust out and open up a part of yourself that doesn’t exist in your everyday life. Playing a character like Lil’ Kim helped me feel healthier about myself.”

Naughton says that when she played Kim, she worked out more and felt good about her body. Now, playing the character of Tasha has helped her explore and appreciate another side of herself.  “Doing this role has made me feel a little bit more like a woman. Sometimes I think it takes a great character to bring out the best in you. So even though I’m nothing like these characters, playing these roles does help me to feel a little bit more free.”

But in another role that’s even more personal to Naughton, she’s an activist who advocates for the empowerment of women and girls dealing with self-worth issues, beauty, sex and getting tested for sexually transmitted infections, such as  HIV. These issues, she believes, are all directly and indirectly related.

“I go to a lot of young women’s organizations and talk to them about making sure they know that they are worthy of respect and that they don’t have to rush into sex,” she says. “ I think women equate being sexually active with their worth and beauty. But I tell them it’s OK to be smart, have values and not have sex just to be popular and to fit in.”

For many women and girls worldwide, these goals are also directly related to the issue of gender equality that’s being championed by the global health community. Says pediatrician Nafsiah Mboi, MD, MPH, chair of the Board of the Global Fund and minister of health for Indonesia, “In many societies, women and young girls do not enjoy the same access to health as men, let alone the same rights or opportunities. But a society that does not cure and treat its women and young girls with love and care and with equality will never be a healthy society.”

Last spring, the Global Fund’s Gender Equality Strategy Action Plan rolled out an initiative to address gender inequalities and strengthen efforts to protect women’s and girls’ rights to health care. One focus of the plan targets HIV/AIDS and addresses the gender inequalities that drive this disease. This is vital because HIV is the leading cause of death worldwide for women ages 15 to 44.

In general, a lot of media images and peer pressure directed at women and girls wreak havoc on their self-esteem and put their sexual health at risk. This is why Naughton is so committed to working with campaigns that reach out to women and girls in college and high schools; they’re among the population groups at increased risk of HIV. “I’m also someone who advocates for checking your status with OraQuick, the at-home HIV test,” she says.

To achieve health and wellness requires self-love and self-appreciation, Naughton adds. “I want for all the young girls out there to recognize how beautiful we all are—no matter what shade of color your skin is, no matter how dark or light, how tall or short you are. Just start to say to yourself as you look in the mirror each morning, ‘I am beautiful,’ and really live by that. That’s what I do.”null 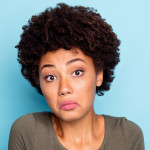