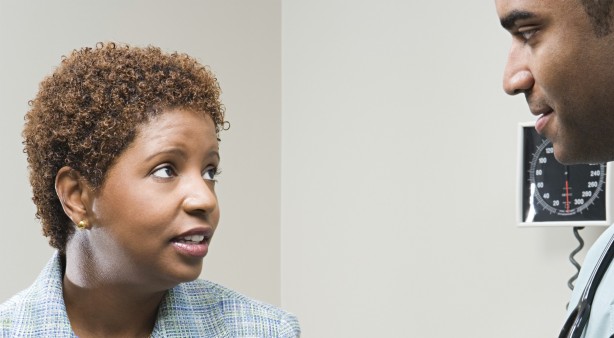 HIV stigma is still present, but more black women are sharing their stories.

Twenty years ago, when Maria Davis was diagnosed with HIV, some in the black community called the disease “The Monster.” Today, there are still many colorful phrases for HIV, which continues to disproportionately affect African-American women. Higher percentages of black women are living with HIV and they are more likely to be at risk compared with Latina and white women.

Davis became an HIV activist and is currently a spokesperson for the I Design (ProjectIDesign.com) campaign. The national HIV education effort was launched by Merck, a pharmaceutical company, to encourage folks living with HIV to communicate candidly with their health care teams.

“That’s why I think it’s important to talk about HIV,” Davis says. “That’s why I’m always standing on the corner with my bullhorn educating anyone who will listen about HIV.”

Davis remains concerned because too many black women and girls don’t think it’s important to know their HIV status. What’s more, Davis is surprised by how many people retain dangerous misconceptions about the virus. “I was recently asked if HIV is spread through saliva, or if someone can get HIV by using a bathroom after someone with HIV has used it,” she says. (Note: HIV is not transmitted these ways.)

In general, women are still most likely to be infected with HIV through heterosexual sex. What’s more, black women and Latinas are more likely to contract HIV through heterosexual transmission than white women. These statistics are some reasons why Davis stresses that women need to know their HIV status as well as that of their partner. “Everyone has an HIV status—positive or negative—but a lot of women I talk to don’t feel comfortable having that conversation with their partner, whether they just started dating or are in a committed relationship, because they think it will bring up trust issues,” she says.

“Sixteen years ago, I started receiving phone calls from scared women who had just found out they were HIV positive,” says Melissa Grove, MS, the executive director of the Legacy Counseling Center in Dallas. Grove designed a program for these women called the Grace Project that evolved into an annual gathering for women living with HIV.

Grove says numbers mean power. “If people don’t know that growing numbers of women are living with HIV, then this issue will not get the attention or funding it deserves,” she says.

Meanwhile, Davis, who lives in New York City, continues to spread awareness about the virus. Davis organizes a monthly showcase of artists, “Mad Wednesdays,” in Harlem where she shares her story about living with HIV.

“After a speaking event, people will come up to me and share their stories,” she says. “But they whisper when they mention that they have HIV because of the stigma.”
Davis longs for the day when no one living with HIV fears to speak up.