Like many women, Ayesha Curry has days when she looks in the mirror and is satisfied with her reflection and days when she thinks otherwise.

Ayesha Curry dropped 35 pounds during the COVID-19 quarantine in 2020 after embarking on a fitness journey supported by healthy eating and regular exercise. Published last year, her second best-selling cookbook, The Full Plate: Flavor-Filled, Easy Recipes for Families with No Time and a Lot to Do, reflects “how my life is right now,” she says.

Curry, 32, explains that it wasn’t until she turned 30 that she really noticed how food could make a difference in how she feels and looks. “I’m not a dieter,” she says. “For me, it was really about learning how to exercise portion control and living that 80/20 life.

In the world of economics, the 80/20 rule is known as the Pareto principle. The rule was popularized as a way to maximize performance in business by focusing on small but key tasks to achieve the greatest output. As she’s built her brand in the food and lifestyle industries, Curry applies the principle to all areas of her life 24/7.

Curry was born and raised in Toronto, where she became interested in cooking while watching her babysitter prepare curry and roti for her mother’s home hair salon clients.

Curry, whose parents are multiethnic (her mom is Afro-Jamaican and Chinese and her dad is African American and Polish), grew up in a diverse neighborhood surrounded by the mouthwatering smells wafting from pots simmering with dishes from around the world. “In our neighborhood, there were Northern Indian restaurants on nearly every corner,” she says in her first cookbook. “And if it wasn’t Indian, it was a restaurant serving Ethiopian, Greek or the best darn Chinese food you’ve ever tasted.

Then, at age 14, Curry’s family moved to North Carolina, where she first met her husband-to-be, NBA player Stephen Curry, of the Golden State Warriors. (At the time, he was 15.) The two teenagers went their own way but started dating years later when Ayesha moved to Los Angeles to pursue acting and reconnected with Curry. In 2011, the two wed; five years later, Curry landed a cooking show on the Food Network effectively launching her brand with the food and lifestyle blog Little Lights of Mine and a YouTube channel where she shared cooking and lifestyle tips.

In 2012, Curry gave birth to her first child, daughter Riley Elizabeth; three years later, she had another girl, Ryan Carson, and then a son, Canon W. Jack, in 2018. (All three children were born in July.) As Curry embraced her roles as wife, mother and businesswoman, she created a line of cookware and a meal kit delivery service, and then in 2016, she published her first cookbook, The Seasoned Life: Food, Family, Faith, and the Joys of Eating Well, which became a New York Times best seller. The following year, she opened her first restaurant, International Smoke, in San Francisco, with chef Michael Mina; she has since opened three others in Houston, Miami and San Diego.

Food figures prominently in Curry’s childhood memories. One that she’ll never forget is the birthday party her parents threw for her at age 13, during which Curry got to be chef for the day and whipped up dishes alongside her friends.

As an adult, Curry became even more serious about mastering the culinary arts when she took cooking classes at the San Francisco Cooking School after the couple settled in the Bay Area prior to her becoming a mother. At home, she continued her practice sessions in the kitchen, making meals that allowed her to indulge her passion and flair for innovative cooking. Many of the recipes that she included in her debut cookbook were sourced from a collection of favorite dishes she enjoyed with her family while living in Canada and North Carolina.

These foods helped to define what has become Curry’s culinary signature: mouthwatering homecooked meals shared with family and friends to celebrate the joy of small but unforgettable life moments of being together with loved ones.

“I can remember what I ate in the most important moments of my life,” Curry says about meals she’s made and served during gatherings at home to watch her husband hard at work on the basketball court. “I don’t remember the game, but I remember the food.”

While on her way to slimming down, Curry kept her meals delicious, often revisiting ethnic dishes steeped in her Jamaican roots. But she also added a fitness regimen to her daily routine because she “wanted to be strong and healthy for myself and the people who depend on me,” Curry told her followers on Instagram. “But it was important that I did it my way, which meant I needed working out to fit in my life, NOT take me away from it.”

Curry’s exercise routine yielded another business venture when Fitbit asked her to generate a six-week series of original premium content, including tips for quick workouts and family-friendly activities and recipes for tasty and nutritious meals.

Being healthy isn’t just about what you do in the gym or kitchen; it’s about the in-between too and how it all fits together,” Curry said about sharing her fitness routines and healthy recipes with the Fitbit community. 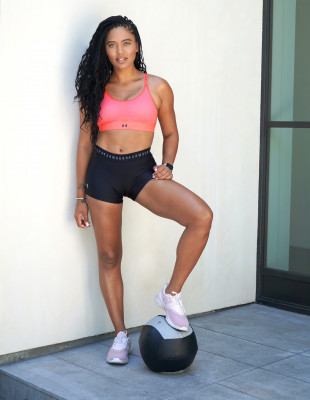 Once she dropped the extra pounds, Curry posted a few bikini shots taken by her husband on Instagram. The move drew an immediate response. Many people shared comments in support of her weight loss and confidence in her body image. However, some users pointed to a December 2015 tweet in which Curry wrote, “Everyone’s barely wearing clothes these days huh? Not my style. I like to keep the good stuff covered up for the one who matters.

Some fans interpreted Curry’s bathing suit photos as hypocritical. But the social media star, who is no stranger to controversy, responded that she’s allowed to speak her mind without being vilified for it. In the comments, she addressed critics, writing, “I was talking about someone walking around casually shopping in nipple pasties.

The controversy resurfaced when Curry posted a nude photo of herself on Instagram to promote the spring 2021 issue of her lifestyle magazine, Sweet July. (The publication is named for the month during which Curry says the sweetest moments in her life have occurred.) The photo ran as a full page in a self-care section of the publication titled “Body Refreshers” and showed Curry with her legs and arms crossed to cover her body.

The picture prompted a few negative comments that once again cited her 2015 tweet. In response, Curry repeated her defense; in predictable social media style, the matter fizzled.

On Red Table Talk, Jada Pinkett-Smith’s Emmy-winning Facebook Watch series, Curry discussed her personal insecurities. She said she hated how women fawned over her husband and how sometimes she felt something was wrong with her because she doesn’t receive similar attention from men.

Pinkett Smith assured Curry that she was beautiful. “Don’t ever think for one minute that ain’t some men out there looking at you like, ’I wish,’” she said. “And I’mma tell you who knows that more than anybody: Your husband.

Indeed, Curry’s spouse responded with the following Instagram post. “Proud of you for being authentic and putting yourself out there—not being afraid of potential bull s#*# and nonsense that could and did come at you,” he said. “Way more positive than negative with all of this. Keep being you. I love you.”