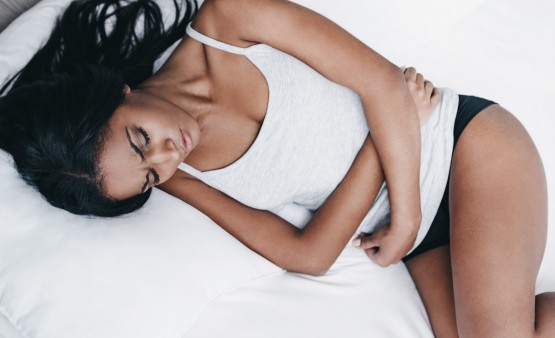 When does monthly period pain require that we pay serious attention?

Evie was 12 when her menstrual cycle began. Each month, a severe pinching pain just below her lower abdomen announced its arrival. After a day or two, the pain would subside. But when Evie turned 35, the pain grew worse. She wondered whether she should go to the doctor.

Like Evie, many women are unsure of what constitutes normal versus abnormal pain during their monthly period. But according to the American College of Obstetricians and Gynecologists, when menstrual pain lasts for more than two or three days and is severe enough to stop you from engaging in your regular activities, it’s a clear warning sign that you should pay your doc a visit.

Generally, there are two types of menstrual pain, a.k.a. dysmenorrhea. Primary dysmenorrhea is caused by severe contractions of the uterus triggered by the release of hormones, called prostaglandins, that regulate a woman’s reproductive system. The other type of menstrual pain is called secondary dysmenorrhea. It’s caused by a disorder in a woman’s reproductive organs, such as when the tissue lining the uterus grows outside of this organ (endometriosis) or when noncancerous tumors (fibroids) form inside, outside or in the walls of the uterus.

In Evie’s case, fibroids caused the excruciating pain, heavy bleeding and fainting spells she suffered each month. “I didn’t dare leave the house when I was menstruating,” she says.

But the good news is, there are effective treatments for dysmenorrhea. Depending on your age, health, medical history and preference, doctors might suggest simple at-home remedies to try, such as hot baths or showers, abdominal massage or applying a heating pad across the pelvis. But if these fail to soothe the pain, docs may propose lifestyle changes, drug therapy or surgery.