Many people think eating sugary foods can cause diabetes. Is there any truth to this popular notion? 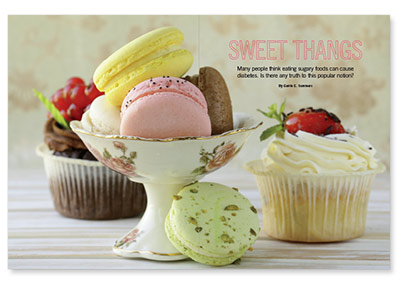 Click here to read a digital edition of  this article.
As a child I’d watch my mother scoop a teaspoon of sugar from the bowl on the kitchen table and let the crystals melt inside her mouth. I thought this was a strange habit and, fortunately, not one I inherited. But several years later my mom developed type 2 diabetes and was banned from eating table sugar, and I nearly panicked. As an adolescent, the doctor hospitalized me for diabetes testing and told my mother  she should modify my diet. I could only drink sugar-free sodas and was forced to forsake some of my favorite sweet treats—namely, chocolate cake and candy.

For years, like many people, I believed that if I ate too much sugar or drank too much soda, I’d get diabetes. Certainly, if you have diabetes, or want to avoid this chronic disease, you should cut sugar from your diet, right?

Well, not exactly. Contrary to popular belief, sugar does not cause diabetes. So why is there so much confusion?

“Too much sugar, especially added sugars that we eat and drink from premade or processed foods, can lead to weight gain,” says Sobia Khan, MSc, RD, author of 150 Best Indian, Asian, Caribbean and More Diabetes Recipes. “Weight gain can indirectly lead to type 2 diabetes, since you are more at risk of the disease when you carry extra fat around your abdomen or organs.”

This fatty baggage can lead the body to become resistant to insulin, Khan explains, a hormone produced by the pancreas. When this happens, it means the insulin produced isn’t able to send a message to the body’s cells to take in glucose, or sugar, from the blood so cells can use it for energy. In addition, if insulin function is impaired, the hormone can’t signal the liver to store glucose if the body has enough to meet its energy needs.

Happily, some sugar is good for you. “In fact, you need sugar, particularly carbohydrates, to fuel your body, especially the brain,” Khan explains.

There are many sugars, such as glucose, fructose and sucrose (table sugar). These are simple sugars, or carbohydrates. But there are also more complex sugars, such as polysaccharides, found in pasta or bread, “and they don’t all work the same in our body,” Khan says.

Perhaps, there’s a real possibility that  the eating-sweets-causes-diabetes myth originated because, in the past, doctors advised diabetics and those showing sugar in their urine to cut down or stop eating sweet foods. Doctors correctly believed sugar would raise blood glucose levels too high, but this would happen only if someone was insulin resistant, or their body was not producing enough of the hormone. “Insulin is secreted when you eat,” Khan says. “This is how the body regulates the level of blood sugars.”

But simply eating sweets or sugar doesn’t cause either type 1 or type 2 diabetes. Type 1 diabetes is caused by genetics and unknown factors that trigger the onset of the disease. In type 1 diabetes, there are few or no insulin-producing beta cells in the pancreas because the body destroys them.

Type 2 diabetes is caused by genetics and lifestyle factors. For example, being overweight or obese and following a diet that’s high in calories (from any food sources, not only sweet stuff) can increase the risk of type 2 diabetes.

In type 2 diabetes, individuals may have enough pancreatic beta cells, but either the cells don’t produce enough insulin or the person is insulin resistant and unable to use the hormone to maintain proper cell functions.

Sometimes people are diagnosed with pre-diabetes. In pre-diabetes, blood glucose levels are higher than normal, but not high enough for someone to be considered diabetic. If you have pre-diabetes, it’s possible to delay or prevent getting diabetes by making certain lifestyle changes, such as eating healthier food. “That is why when managing one’s diet for diabetes, it doesn’t matter if you have type 1 or type 2,” Khan says.

To properly manage sugar in a diabetes-prevention diet, it’s key to understand that while sugar isn’t considered to be the cause of diabetes, sweets are indirectly linked to developing the disease, or they can be a contributing factor. According to study findings published in 2013, increased sugar in a population’s food supply was found to be closely related to higher diabetes rates. What’s more, the study also suggested that the longer the period of time a population group indulged their taste for sweets, independent of other foods eaten, calories consumed, physical activity levels or obesity rates, the more diabetes occurred in this population.

As a result of the findings, researchers suggested that sugar affects the liver and pancreas differently than other types of foods. The scientists also stressed that when sugar intake dipped, so did diabetes rates. But interestingly, other study findings showed individuals who consumed a lot of sugar weren’t at risk of diabetes. And, once again, the drop wasn’t related to what else they ate, or how active or obese they were.

So what about sugary drinks? “The link that’s likely an indirect one is that weight gain occurs with the intake of sugar-sweetened beverages, which then can lead to type 2 diabetes,” Khan says. “Certainly, if you are at genetic risk of diabetes, with someone in your immediate family a type 2 diabetic, then you should regularly avoid beverages of any kind sweetened with sugar.”

Drinks sweetened with fructose or glucose can also cause weight gain that may lead to insulin resistance and higher blood sugar levels. That’s why the American Diabetes Association advises everyone to limit their intake of beverages such as regular sodas, and fruit, energy and sports drinks.

But follow-up studies are key to check on how specific foods, such as syrupy-sweet drinks, may affect diabetes onset, scientists stress. Until findings are definitive, many doctors offer one suggestion to everyone: Lower your intake of sugar and simple carbohydrates. The good news is, you can still enjoy an infrequent dessert without fear of developing diabetes.

In general, Khan suggests regarding desserts as only an occasional treat. What’s more, if you can make them more diabetes-friendly then do, but it’s a little tricky. “Traditional desserts have a lot of sugar and fat, so they are probably the toughest to change and alter while still keeping the same look, taste and authenticity,” Khan says. “The main thing to change in any dessert is the amount of sugar, and, if possible, without altering the taste too much, try adding other sweeteners to keep the total amount of sugar down to meet diabetes guidelines.”

Even people living with diabetes and those who are pre-diabetic can have their cake and eat it too. “Just follow a generally well-balanced diet,” says Khan. “And if you occasionally indulge in sweets or high-calorie foods, do so only in moderation so the amount of carbohydrates or added sugar you have at one time won’t raise your blood sugar too much.”

Khan says she created her cookbook for certain populations who are at higher risk genetically of getting type 2 diabetes, such as folks of South Asian, Caribbean or African backgrounds.

Suggests Khan, “The key is prevention, and in the case of type 2 diabetes, making good lifestyle choices (watching your diet and exercising) to ensure you do not get diabetes.”

But, she says, “With proper meal planning and knowing how to manage food on your plate, you can save room for dessert.”