Until recently, coconut oil was demonized because of its high amount of saturated fat. Turns out, not all saturated fats are equal. And now, more nutritionists regard the tasty oil as a good-for-you food. 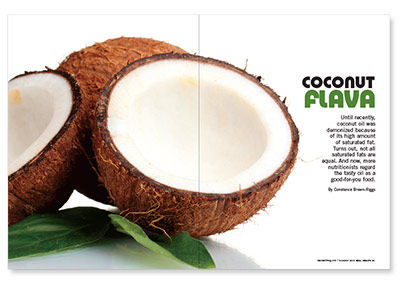 Click here to read a digital edition of this article.
When Sarah Dwyer replaced vegetable oil with extra virgin coconut oil last winter, the benefits were profound. She immediately lost five pounds—the five that had been lingering for the past year—and yet her energy level increased, and she was no longer ravenous between daily meals.

Sarah is a vegetarian and a big fan of all things coconut. She can’t wait for her toast with coconut oil spread on it every morning. “I use a tablespoon of coconut oil for sautéing veggies or in beans and even in my grits,” she says.

Sarah also drinks coconut water and coconut milk, uses coconut creamer in her morning coffee and, on occasion, indulges in coconut-infused dark chocolate. But could all that coconut be good?

In the 1970s, research found that the increasing incidence of cardiovascular disease in the United States was directly related to a high intake of fat—particularly saturated fat, the type that’s in animal foods like meat, lard and butter, as well as coconut, palm and palm kernel oils. So we revamped our recipes, substituting heart-healthy fats like margarine and corn oil. And food companies, yielding to consumer demand for healthy options, manufactured low-fat and fat-free versions of our favorite goodies.

But then we learned that the margarine and other hydrogenated vegetable oils have “trans fat”—which acts like saturated fat, raising cholesterol levels and clogging arteries. As a result, health authorities ad-vised us to ditch the margarine and start using heart-healthy olive oil and canola oil. Eventually, food companies and restaurants followed suit.

Meanwhile, food manufacturers and restaurants were encouraged—and regulated in some cities like New York—to avoid using hydrogenated oils with trans fat. So they began experimenting with coconut oil. It isn’t animal-based; it’s solid at room temperature like hydrogenated oil; and it gives piecrust and other baked goods the flaky texture we love. Soon coconut oil began showing up in recipes for bread, granola, muffins and even ice cream.

Despite its sat-fat content, coconut oil got a pass because it’s different from other saturated fats. About half the sat fat in coconut oil is a type called lauric acid. Proponents of coconut oil say lauric acid, a medium chain triglyceride (MCT), can boost HDL “good” cholesterol levels, making it neutral in terms of heart disease. MCTs are handled by the body more like carbohydrates than fats. They are easily absorbed, digested and utilized as energy rather than stored as fat. That’s why Sarah lost weight and her energy level increased. And because coconut oil is plant-based, it may actually contain many antioxidants and other substances that can affect health in positive ways.

But not all experts agree that coconut oil is a magic potion. Janet Brill, PhD, a specialist in cardiovascular disease prevention and author of several books including Prevent a Second Heart Attack, believes that the saturated fat in coconut oil is just as problematic as the sat fat in animal products. “This is because in coconut oil, the lauric acid also comes packaged in with palmitic and myristic acids. Myristic acid is the most cholesterolemic fatty acid, meaning one that dramatically raises blood cholesterol levels,” she says. “If coconut oil has any positive effect on health it is modest compared to its potential to raise the risk for heart disease.”

However, the experts agree that when solid fats are needed you should use only products free of trans fats, and that in general you should try to keep your trans-fat intake as low as possible. And while the health benefits of coconut oil have yet to be fully supported by scientific evidence, in the context of a healthy, calorie-balanced diet, there is room for coconut oil.

COCONUT COMPARISON
Today, store shelves are lined with a variety of coconut oil, but when it comes to healthy cooking they are not all created equal. Richard A. Amster, assistant professor and chef instructor at Suffolk County Com-munity College’s Culinary Arts Center in Riverhead, New York, has experimented with coconut oil. He says, “Choosing the right product will provide oil with the most health benefits, best aroma and cleanest flavor.” Here’s a short and sweet primer:

Organic:
This refers to the way in which the coconuts are grown. Organic coconut oil is free from genetically modified organisms (GMOs) and pesticides. Amster suggests that if a label claims the product is organic, you should also look for the seal of a certifying organization like Ecocert to ensure the claim is valid. “Without a certifying agency the term [organic] loses credibility,” he says.

Extra virgin or virgin:
There is no real difference between extra virgin and virgin coconut oil. Both are made from the first pressing of fresh, raw coconut meat and contain no added coconut flavor or scent. “This is the purest form of the oil and presents with the freshest flavor and aroma and provides the greatest health benefit to the consumer,” Amster says.

Cold-pressed:
This is the process of oil extraction where coconut milk is extracted at a low temperature of 140 degrees Fahrenheit. The coconut milk is then allowed to stand for two days, which is when the fat separates and rises to the top before it is poured off to produce extra virgin or virgin oil. Experts say coconut oil that is cold-pressed retains more of its natural coconut flavor.

Refined:
The term refers to the heavily mechanical and chemical process of extracting oil from coconut meat. The chemicals involved in the refining process include hexane, lye and other harsh chemicals—which of course means refined coconut oil is not organic. Another downside is that refined oils are often hydrogenated—the process of adding hydrogen to make liquid fat more solid at room temperature. Hydrogenated coconut oil contains trans fat. Amster says refined oils have less of an aroma and coconut flavor. In fact, refined oils may actually come from dried or rancid coconut meat. These lower quality oils can tolerate slightly higher cooking temperatures than virgin coconut oil.

COOKING WITH COCONUT OIL
All oils have a smoke point—the temperature at which the oil turns into a vapor, loses flavor and becomes unsuitable for cooking. Coconut oil’s smoke point is usually lower than the more common cooking oils like canola, olive, corn and peanut oils. “This means that it may be less suitable for sautéing, which depends on high heat,” notes Amster. You won’t be able to pan or deep fat fry with coconut oil either; both require very high temperatures—but you can use it for roasting.

If you’re new to coconut oil, you’ll be surprised to find it doesn’t have an overwhelming coconut taste like many coconut-flavored beverages, candies or baked goods. Organic extra virgin cold-pressed coconut oil has a pure, clean and light coconut aroma and flavor. Amster cooks omelets and sweats onions in coconut oil without any lingering coconut flavor. He says chocolate chip cookies and muffins also bake well with just a hint of residual coconut flavor, which complements the other ingredients in his baked goods. Roasting vegetables and brushing a whole chicken with melted coconut oil result in a product with a surprisingly clean flavor and just a hint of coconut, he adds.

USING YOUR COCONUT
So should you switch to the tropical oil? Emerging research reinforces the fact that natural ingredients are safer than highly processed ingredients. Unrefined coconut oil is natural, trans-fat free and has been used in tropical countries and around the world for years.

If you choose to use coconut oil, do so in moderation. Organic, extra virgin, cold-pressed coconut oil is the purest. Remember, no matter what form of fat you eat, oil contains over 100 calories per tablespoon—so limit your intake of this food if you’re counting calories. 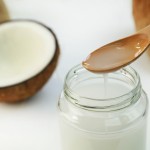 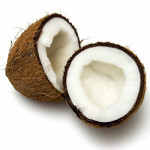