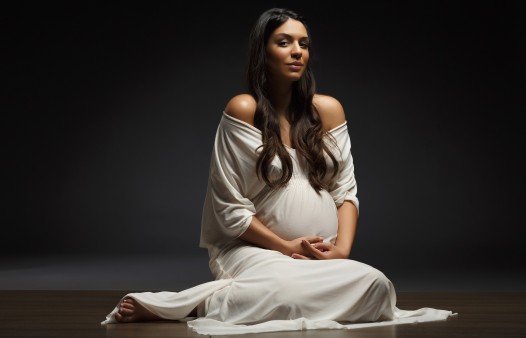 Many mothers-to-be find out that being pregnant affects the entire body, including their tresses.

During her pregnancy, Irene, a 36-year-old clinical psychologist based in Colorado, says she noticed her hair become luxuriously shiny and thick. But some other moms-to-be say the exact opposite. Many report that during pregnancy, they watched in dismay as their once luscious tresses shed copiously for no apparent reason. What gives?

According to dermatologists, a woman’s hair can undergo a number of changes during and after pregnancy. Like Irene, some women enjoy really good hair days while they’re carrying a child. Others may complain they have nothing but bad hair days. Some women report their hair color lightened, or say they noticed more gray strands than they’d seen before. A number of them say their hair texture changed. Some with straight hair say their tresses became curly, and others with curly hair noticed straighter strands.

Before she became pregnant, Irene says her hair texture was extremely curly. “While pregnant, I got it flat-ironed to get my ends trimmed and it was super straight,” she says. “Not only that, but when I washed it later, it never went back to the same curl pattern. It’s been over one year and my hair is still not as curly as it once was.”

Now the mother of two, Irene noticed that her hair “seemed to retain moisture better,” she says. “My hair was oilier during pregnancy, but in a good way. It seemed super healthy in comparison to the normal state of my hair.”

New mom Rita Linkner, MD, a New York City dermatologist, also enjoyed thicker, lusher, healthier-looking and -feeling tresses when she carried her child. “I do believe in pregnancy hair, because I experienced it myself,” she says.

Indeed, findings show that scalp hair becomes fuller during pregnancy because of an increase in the diameter of hair strands. “The structure of the hair can actually change on the microscopic level in a way that shows the development of thicker strands during pregnancy,” Linkner says.

Normally, the hair growth cycle is composed of three phases: anagen (growing), catagen (transitional) and telogen (resting and shedding). During pregnancy, “the shift in hormones causes hairs to remain in the anagen stage, which results in increased hair growth with decreased hair loss,” Linkner says. “Usually, hair growth is substantial during pregnancy.”

This period of growth may result from an increase in levels of the hormone estrogen during pregnancy. What’s more, estrogen causes the resting phase of the hair growth cycle to lengthen. As a result of this extended resting period, fewer hairs fall out each day, so hair isn’t lost and tresses appear to thicken up.

In addition, during pregnancy many women change their diets and avoid unhealthy habits, such as smoking, drinking caffeinated beverages and exposing themselves to chemicals. These lifestyle modifications also support hair growth. “I took care of my hair the same as I do when not pregnant,” Irene says. “I washed my hair weekly with a sulfur-free shampoo and used a leave-in conditioner.”

What’s more, she also took a prescription prenatal vitamin. “I honestly think that’s why my hair did so well,” she adds.

Still, some women do experience hair loss during and after their pregnancies. For many moms-to-be, once hormones return to normal levels after pregnancy, hair growth dwindles as tresses move into the telogen phase, and they lose the strands they gained.

“I have seen examples of when the hair growth doesn’t completely recover,” Linkner says. “That usually means there is a second cause of hair loss that warrants an investigation by a dermatologist.”

If this is the case, some dermatologists suggest women with severe post-partum hair loss speak with their health care provider to find out what the cause of the problem might be. To address it, a dermatologist might suggest taking supplements to ease the severity of post-partum hair shedding.

Telogen effluvium occurs when the number of follicles producing hair decreases during the telogen, or resting phase, and hair loss ensues “around the third month after delivery, when large numbers of the hairs have all cycled together into the hair shedding phase,” she continues. “Expect that sudden hair shedding is going to happen.”