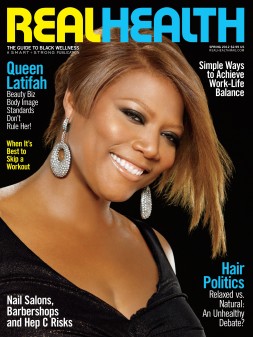 For Queen Latifah, embracing who you are physically, emotionally and spiritually, regardless of what others think, leads directly to a better body image. 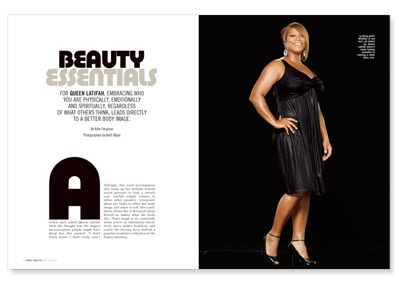 A writer once asked Queen Latifah what she thought was the biggest misconception people might have about her. Her answer? “I don’t really know; I don’t really care.” Tellingly, this royal proclamation also sums up her attitude toward social pressure to look a certain way. Latifah simply refuses to allow other people’s viewpoints about her looks to affect her body image and sense of self. Her confidence allows her to feel good about herself no matter what she looks like. That’s tough to do, especially when you’re an entertainer whose every move makes headlines and you’re the driving force behind a popular cosmetics collection in the beauty business.

But as the saying goes, “When the going gets tough, the tough get going.” When Latifah and her female costars in Living Single, the popular Fox-TV series that aired from 1993 to 1998, got leaned on by execs to lose weight, she refused. “I realized a long time ago that I definitely did not want to be measured by my waistline,” Latifah says. To her, a decision to lose weight was one she’d make for herself, not for somebody who told her she needed to drop pounds to conform to the network’s idea of what these women’s appearances should be.

But don’t get it wrong. Latifah has nothing against paying attention to your body. She’s definitely health conscious, and she regularly works out with a personal trainer and on her own. In 2007, she signed up as a weight loss spokesperson for Jenny Craig. By 2008, Latifah had lost 20 pounds. But some fans felt betrayed by their favorite queen. They accused Latifah of turning her back on plus-size women, especially since she had previously stressed being comfortable with her curves.

Unfazed by the criticism, Latifah responded. Her weight loss goal was not “about getting skinny.” What was important to her was getting healthy via proper nutrition and fitness and not giving other people’s opinions about her appearance any weight.

As Latifah’s career progressed, she won even more fans because of her willingness to talk about weight loss and other issues many women found relevant. Over the years, she built a solid reputation as a “real woman” celebrity. She told women to believe in their inner and outer beauty no matter what size they were, and urged them to keep their self-esteem strong.

Last year, Latifah told Fashion Magazine that when she turned 40, in 2010, she was excited about her birthday. Although many entertainers keep their true age a secret, Latifah said her only comment on aging was that she wants to age naturally, maintain her body, make sure she looks good for as long as she can and not obsess about her weight “to the point where I want to chop and cut and suck everything out.”

But long before women reach their forties, they face body image issues. Most young girls at home watch the rituals that women go through to improve their appearance and render themselves socially acceptable. “We internalize the message that as women, we will be defined by our looks and our size, not by our character, smarts or accomplishments,” write the Boston Women’s Health Book Collective in Our Bodies, Ourselves.

Still, sometimes what happens is women get a break. Something, somewhere or someone who enters their lives works to deflect this negative message. When Latifah was a young girl, she received encouragement from her mother, friends and acquaintances she met while trying to establish her career. Later, when she established herself on a national TV show, she inspired many women to feel good about themselves regardless of their size. Her success, she says, made them feel that if she could do it, so could they.

But, Latifah adds, it’s also important that people educate themselves about how to get and stay healthy. She stresses they must try to build confidence so that other people’s opinions won’t color how they see themselves. And, indeed, Latifah has cemented her philosophy with actions that support her position.

According to an interview in Parade magazine, when clothing manufacturers approached her to consider a signature clothing line, Latifah bristled about the lack of plus-size selections for consumers. “There’s no way that I could’ve come out with a clothing line and not have it be for girls who love their curves who happened to be a size 10 or better,” Latifah said. “I’ve always tried to represent for all women and not just one particular vision of what beauty is.”

True to her word, Latifah launched her Queen Collection clothing line exclusively on the Home Shopping Network. The comprehensive line includes dresses, skirts, pants, tops, coats, jackets and accessories, plus fragrances, all sold with a tagline urging buyers to “embrace who you are—at every moment.”

Latifah’s “real women” fans quickly weighed in with their online comments. Said one reader, “Wow, it’s time, Queen! We need a real woman’s clothing line that fits women as they are as opposed to an ideal-type.”

But because today’s mass media still primarily promote idealized images of young, thin females, people’s perceptions of what makes a woman attractive remain distorted. “The body ideal remains the same,” stresses Our Bodies, Ourselves authors. “Skinny and large-breasted with long hair—leading some women of color to judge themselves by that norm.”

Years ago, Latifah filled in a personal questionnaire for Tommy Boy Records. One question asked what she’d change about herself. Just a young adult at the time, Latifah wrote down an intriguing answer: “I would like to quit smoking and become a stronger person inside.”

Whether or not the last part of Latifah’s response reveals difficulties she may have had with reconciling her outer image as a strong female rapper with how she really felt inside is anyone’s guess. But like most women, she has faced body image pressures.

Such pressures start early. Fifty-three percent of American girls are “unhappy with their bodies” by age 13, and this grows to 78 percent by the time girls reach 17, according to one study by the National Institute on Media and the Family.

What’s more, for Latifah, being in the entertainment business can create insecurities about how you look unless you’re strong enough to shut down those inner voices. The pressure is there, she says. “As a kid starting out [in the music business], I definitely thought about how I looked. I thought I should probably get into shape and train,” Latifah reveals.

For young girls in particular, another ugly side to lookism is that they are relentlessly targeted by those who profit from—and purposely cultivate—girls’ body-image insecurities. “The combination of self-consciousness and spending power makes young people prime targets for corporations,” observe the authors of Our Bodies, Ourselves. “Girls in particular represent an important and powerful revenue source, and savvy marketers make it a point to sell them on the same messages of insecurity they’ll hear throughout adulthood, ensuring their lifelong role as consumers.”

What does Her Majesty say to women about these unscrupulous profiteers? Don’t let advertisers tell you how you should look, or be!

What’s So Bad About Looking Good?
Nothing. But when social conditioning, media images and interactions with family, friends and peers cause girls to have hang-ups about their looks, that’s just plain ugly.

When black girls receive their first doll—in most cases a white doll, which may or may not be Barbie—the image-making begins, says Mary Pender Greene, a psychotherapist in New York City. “A Barbie [doll] is the example of what a beautiful person looks like. Barbie is white, she’s blond, she’s thin, and she’s privileged in that she gets all the goodies.”

Last year, skin and body products giant Dove released findings of a survey it commissioned. The report revealed that only 4 percent of women around the world consider themselves beautiful—and anxiety about looks begins at an early age.

The study surveyed more than 1,200 girls, ages 10 to 17, worldwide. Of these youngsters, 72 percent said they felt tremendous pressure to be beautiful. What’s more, only 11 percent of the surveyed girls felt comfortable using the word “beautiful” to describe their looks.

But mothers and other women can counter the attack on girls’ self-esteem, and in the process help youngsters reach their full potential later in life. How? Well, according to a panel of self-esteem experts, women should practice the following behaviors with girls: