Did you spend this past summer hiding your toes in the sand? If so, you’re not alone. Roughly 10 percent of the U.S. population—about 23 million people—are affected and infected by unsightly toenail fungus.

Nail infections are typically caused by fungus that attacks the nail bed—the skin under the nail. In the beginning, it can appear as a white or yellow spot under the tip of a toenail. As the fungus spreads deeper into the nail bed, the nail becomes discolored and thickened and it develops crumbling and brittle edges.

“We shed skin and nail cells constantly, and if you’re in an environment that’s hot, warm and moist, that’s the environment that fungus likes,” says Klein, adding that carpets, yoga mats and improperly disinfected areas also provide a breeding ground for fungus.

Infections are common among people older than 50, especially those who suffer from diabetes, which compromises their immune system.

While there’s a high prevalence of infection among men, women are more likely to seek treatment. “I think it’s because women wear open-toed shoes, so they are much more aware of their toenails and how they look,” he says. “A lot of men just shrug it off, which they shouldn’t because this is something that should be treated.”

Though viewed by some as a minor cosmetic issue, fungal infection can cause onycholysis—a condition where the nail separates from the nail bed. It can cause discomfort, pain and a foul odor, Klein explains.

What does he recommend?

Klein’s first treatment choice is usually Miranel, a topical medication that contains homeopathic remedies such as tea tree oil, menthol, eucalyptus and camphor, which are all recommended for treating fungus.

If a patient doesn’t respond to the topical medication, then Klein prescribes an oral medication. But he cautions that while oral meds are considered safe, they have potential side effects and harmful drug-to-drug interactions.

Besides oral meds, laser therapy is a new option to treat toenail fungus. It is costly, however, and might not be covered by insurance.

“With our economy as bad as it is right now, I have a hard time suggesting to a patient to spend between $850 to $1,000 for a laser treatment on their toenail when I can treat it pretty effectively with topical or oral medication,” Klein says.

If neither topical nor oral medications prove effective, then get tested for other conditions. Thickened nails may be caused by trauma, and they can be an indicator of other illnesses, such as a thyroid condition or psoriasis.

But before you panic, Klein says, take note that melanonychia—darker nail pigmentation—is common among people of the African diaspora because they’re more apt to have high levels of melanin. About 77 percent of African Americans older than 20 and almost 100 percent of those older than 50 have evidence of this condition.

If dark-colored nails do indicate a fungal infection that won’t go way, as a last resort, the nail may be temporarily cut back or completely removed so that it never grows back.

In order to prevent the infection from getting to that point, seek medical attention when it’s mild and then be patient for the condition to clear. “You have to remember that toenail fungus is a hard and slow condition to treat,” Klein says. “Toenails grow about one millimeter per month and take 12 to 18 months to be completely replaced. Patients have to be diligent about taking their medication regularly.”

Since it is a contagious disease, if you live with others, take these necessary precautions: change your shoes often, wear flip-flops in the shower, disinfect the tub regularly and do not walk around barefoot. “Most importantly,” Klein says, “ treat the fungal infection so that you don’t share the love with everybody.” 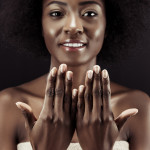 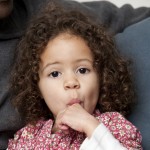 A Nail Polish Can Detect Date Rape Drugs, but Will It Stop Assaults?