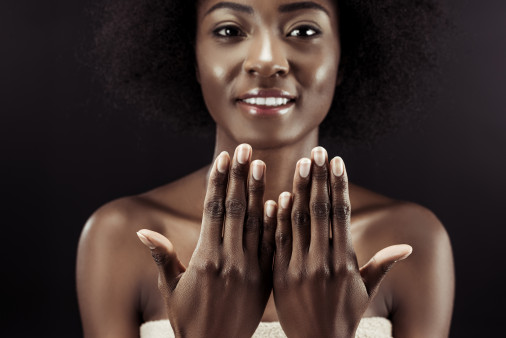 Your nails can say a lot about your health.

Ever look at your nails and wonder why they have bumps, flakes or ripples on their surface or why that white moon-shaped marking at your cuticle is starting to yellow? Turns out, the look and feel of your nails can reveal major clues about health troubles stemming from stress and nutrition issues or even more serious problems inside the body.

Healthy nails should be smooth and clear: without ridges, grooves, spots or discoloration. That said, doctors note that vertical lines on the surface of the nail are essentially harmless and often become more prominent with age. People who regularly have their nails done may have weaker nail beds than those who don’t. If you notice something odd, skip your next salon visit and see a  doctor instead.

According to experts, nails frequently show symptoms of stress. One sign of stress is the appearance of horizontal indentations known as Beau’s lines across the nail surface. These occur when the body has temporarily stopped nail plate growth because of a direct injury to the nail or as a result of uncontrolled diabetes, peripheral vascular disease or illnesses linked to a high fever. Stress can also cause the nails to flake, chip and weaken. A nutritional deficiency may also be to blame.

Ripples or indents in the nail, yellow-reddish drops beneath the nail—termed “oil drops” or “salmon patches”—and distinct white spots on the nails can be early signs of psoriasis.

Cracked, split, peeling, bendy or weak nails may signal thyroid issues. However, if the nails have a slight yellowish hue or become thickened, a fungal infection, which can be treated with a prescription or over-the-counter medication, could be the culprit.

Yellow nails and pale or white nails with darker rims can signal liver problems. Be particularly vigilant if your eyes, hands or other body parts become yellowed, especially if you feel more fatigued than usual, because this could be a sign of jaundice.

Additionally, bluish nails may be a sign that the body lacks enough oxygen, which might indicate lung problems. Redness or swelling around the nail bed is a sign of inflammation, possibly caused by lupus or another connective tissue disorder. Dark streaks under the nails could be a sign of melanoma—the most dangerous type of skin cancer—and should be checked out by a doctor as soon as possible.

As a rule of thumb, any sudden changes in your body, including your fingernails or toenails, should be discussed with and assessed by a health professional.

To learn more about how to treat and prevent common nail problems, read “It’s Flip-Flop Time.”