Shocks to the System

Many terrifying events can trigger post-traumatic stress disorder, but domestic abuse is often overlooked as one of them. 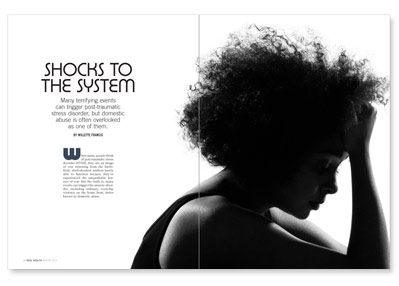 Click here to read a digital edition of this article.
When many people think of post-traumatic stress disorder (PTSD), they see an image of vets returning from the battlefield, shell-shocked soldiers barely able to function because they’ve experienced the unspeakable horrors of war. But the truth is, many events can trigger this anxiety disorder, including ordinary, everyday violence on the home front, better known as domestic abuse.

This is what one woman, Jessica (not her real name), experienced when at the age of 18 she married her high school sweetheart, “P.J.” The two had a courtship that could have jumped straight out of a young adult romance novel—the one where a young girl falls for the popular high school football team quarterback. P.J. was not just a star athlete; he was also a sweet and caring guy, Jessica explains. But soon after the marriage, that changed. P.J. transformed into someone else. He became a violent man who began to beat her.

Jessica’s domestic abuse ordeal began with threatening looks from her husband. They frightened her, making her feel emotional or mental anguish in his presence. “This was the first indication to me that he could get angry enough to hurt me,” she recalls. Her husband also became more controlling. He didn’t want her to leave the house while he hung out with friends.

One day, Jessica got tired of sitting at home, so she went for a jog. When P.J. spotted her, fear seized Jessica and she began running. He sprinted in pursuit and tackled her to the ground. “I just played unconscious so he wouldn’t hurt me,” Jessica says. These were the first signs of the physical abuse to come.

Eventually, Jessica’s husband started slapping and hitting her. “The respect was totally gone; he was out of control,” she says.

Then, P.J. started using drugs. As the domestic violence episodes continued, Jessica began feeling hopeless and depressed. She felt as if she had no reason to live. Although she didn’t know it then, she was developing post-traumatic stress disorder (PTSD) symptoms.

PTSD is caused by exposure to a terrifying event or ordeal in which grave physical harm occurs or is threatened. PTSD symptoms include intense fear, flashbacks, nightmares, severe anxiety, racing heartbeats, dizziness, stomach pains and chest tightness. What’s more, those who develop PTSD from domestic abuse, or other trauma, can experience additional symptoms, such as suicidal thoughts and blaming themselves for the maltreatment.

“[Domestic abuse-related] PTSD can begin at the start of the trauma and continue as long as the person’s in the relationship,” explains Mary Pender Greene, a New York City psychotherapist. “Any abuse over time causes PTSD. And the thing that makes [recovery from this kind of PTSD] so difficult is that part of trying to get better means staying away from what causes you to be and feel vulnerable.”

In Jessica’s case, she felt vulnerable whenever she was in her husband’s presence. But despite her fear, she didn’t leave the abusive relationship. At this point, Jessica’s life became a series of repetitive domestic violence episodes: blowups, beatings and flight, followed by P.J.’s remorse and the couple’s inevitable reconciliation.

Eventually, Jessica’s husband threatened to kill her while the couple was vacationing in Florida. “When he told me he was gonna kill me, there was no reason for me not to believe him,” she says. “In this condition, it was almost as if his mind had temporarily left him.”

The incident was particularly violent and public. When her husband briefly left the hotel, Jessica banged on the doors of other guests to ask for help. When P.J. returned, he attacked her. Someone called the police. When they arrived, they found her crouched down on the hotel parking lot pavement, her elbows to her knees as she tried to protect herself from P.J.’s blows. The cops dragged him away and drove Jessica to the police station.

After this brutal fracas, Jessica temporarily separated from her husband and went to stay with an aunt and cousin. Later, she reconciled with him. But nothing had changed. P.J.’s violent flare-ups continued. Jessica was further traumatized, and her PTSD symptoms increased.

Now, besides feeling hopeless, worthless and depressed, Jessica began to withdraw socially and isolate herself from family and friends. “People may also have a lot of guilt or shame,” Pender Greene explains.

These were feelings Jessica experienced. She avoided her family because she didn’t want them to see her in this desperate condition.

Finally, Jessica’s abusive relationship came to an abrupt end. The police arrested and jailed P.J. on a drug charge. But by this time, Jessica had changed. Now she had developed a more aggressive personality. She began selling drugs and would easily explode into violence if provoked. Eventually, she too was busted for drug possession and sentenced to 18 years.

Jessica explains that her exposure to domestic abuse definitely changed her outlook on life. “It was as if a coldness was running through my veins,” she says. “There was no more warmth left in me.”

For Jessica, the years passed in a blur. She didn’t really know how she’d ended up behind bars. But when she reached her 15th year in prison, she finally understood. The physical abuse and domestic violence had caused her psyche to shift, she says.

Although mental health counseling was available in prison, Jessica says that no one offered her treatment. But eight years into her sentence she became proactive and decided to participate in one mental health prison program. It didn’t work. “It was too superficial for my needs,” she says. “What I’d experienced was so deeply rooted that that particular prison program didn’t even begin to scratch the surface.”

Then, Jessica decided to write her experiences down. What’s more, she also started to educate herself about domestic abuse and its effects. This is how Jessica first learned about PTSD. But she didn’t accept that it related to her situation. “I felt that people who had been traumatized or who suffered some type of PTSD or depression were weak,” Jessica says. “I felt that couldn’t be me.”

As she continued her writing therapy, Jessica cried. “Everything that had happened to me since I was 17 just poured out like a flood,” she says. That’s when a relative became concerned Jessica would commit suicide and alerted a prison case manager.

When the case manager read the 1,000 pages Jessica had written, she congratulated her. “Those prison staffers who understood were very supportive,” Jessica says. “That’s how I got to the place I needed to go.”

Today, Jessica believes if she had gotten professional guidance or counseling to treat the domestic abuse and loss of self-esteem she’d experienced, she wouldn’t have wound up in prison. “[Domestic abuse] pushed me into this other lifestyle,” she says. “I wasn’t this cold-hearted person; I was a happy-spirited, lighthearted girl, and then came the abuse. Had there been some type of preventive measure, such as counseling, prison would never have been a part of my life.”

Seeking professional treatment for PTSD can do more than rebuild self-esteem—it can help abuse victims avoid repeating old patterns. “These people are much more inclined to choose someone who is an abuser,” Pender Greene notes.

In addition, Pender Greene suggests PTSD sufferers seek a type of treatment called cognitive behavior therapy. “This kind of therapy helps people change the thought patterns that stop them from overcoming their anxieties and repetitive thinking about the trauma,” she says.

What’s more, antidepressants and anxiety-lowering meds can help, as can support groups and other therapy options, Pender Greene adds.

Today, Jessica shares her story with others as a domestic abuse awareness advocate. “Telling my story may help other people, but it helps me too,” she says. But Jessica also says she plans to seek professional therapy at some point to help with her recovery.

Traumatic Numbers
Post-traumatic stress disorder (PTSD) is often associated with military personnel who survive warfare, but the condition can develop in anyone who experiences trauma.