Liquor isn’t only for drinking. 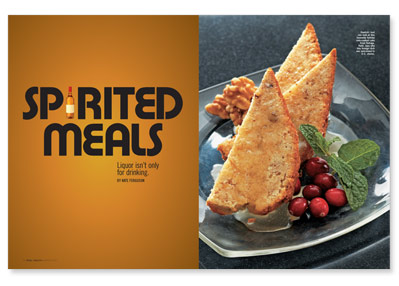 Click here to a read a digital edition of this article.

When people think of alcohol, many don’t see beyond pouring the intoxicating brew or beverage into a glass. But there’s plenty more to do with liquor of all kinds, including wine, beer or liqueurs. Cooks have used fine spirits for hundreds of years as an ingredient in even the most common dishes, prompting taste buds to sing in delicious anticipation.

Ask many cooks why they use liquor in a dish, and you’ll probably hear that they do it for the flavor. But how, exactly, does alcohol enhance taste? Simple. As editors David Joachim and Andrew Schloss explain in their book Fine Cooking, spirits boost food’s flavor in at least two important ways: by evaporation and molecular bonding.

Alcohol evaporation boosts a food’s flavor through a process called sensory perception dynamics. When you open a bottle of Bacardi, you can smell the rum right away. The liquor’s alcohol molecules transport rum’s subtle spicy or caramel aromas to the nose. Alcohol molecules do this because they’re volatile, meaning they evaporate quickly.

When food contains a low concentration of alcohol—1 percent or less—the volatility effect works best to help transport a food’s fragrance to your nose. This means you just need a splash of liquor for flavor enhancement. If more than 5 percent of a dish contains alcohol, you’ll smell less of the food’s aroma and more of an alcohol odor. (When we chew our food, the way it tastes to us is determined, in part, by the release of aromas we first smell. These vapors travel through the nasal canal and passages until they reach a certain part of the brain where they are translated as flavors.)

The second way that alcohol enhances food’s flavor is by its ability to bond to the fat and water molecules in a dish. Picture several steaming hot, well-seasoned, juicy rib-eye steaks soaking up cognac-spiked sauce in a skillet. The cognac is used to deglaze (remove) bits of the steak and caramelized meat fats that stick to the bottom of the pot. The alcohol in the liquor helps the flavorful compounds in seasonings penetrate the steaks. (Alcohol can infuse a dish with sweet, sour, salty or bitter flavors.)

Some people marinate foods in alcohol-infused liquids. Others use liquor when they simmer, bake or flambé (flame) food. In addition, when cooks want to balance a dish’s sweetness or acidity levels, they can add liquor to the dish to spark a tasty chemical reaction.

“Prior to my new healthy food lifestyle without alcohol, I cooked with a variety of wines, bourbon and brandy,” says Rhonda Peters, a certified nutritional counselor and author of the book So, What Can I Eat Now? “Each type of liquor would have a different effect on the food. When I used wine, it would increase the acidity in the food and balance the sweet, spicy flavors of my Southern recipes. But whenever I used bourbon or brandy in my marinades, it would tenderize the meat and add a hint of sweetness. Both effects were really delicious.”

But, Peters notes, the delicious flavor liquor adds to cooked foods does come with a cost. “Alcohol can add calories to the total nutritional content of food, depending on the kind of alcohol and cooking method used,” she cautions. “For instance, 1½ tablespoons of liqueur [sweetened or spiced spirits] is about 160 calories, and five ounces of wine is about 100 calories.”

In general, there are a few standard rules to observe when cooking with alcohol. Some of the rules may seem like common sense, and others may surprise you.

Many people who cook with liquor think most of the alcohol burns off during the cooking process. But the reality is that the amount of alcohol remaining in a finished dish is determined by several factors: the amount of alcohol added, heat applied to prepare the food, cooking and standing time and the size of the cookware. (In general, the smaller the cooking vessel, the more alcohol the food retains.)

For example, in a dish prepared without heat and stored overnight in the refrigerator, Peters says, more than 70 percent of the alcohol (and the calories it adds) remains.

But weight-conscious diners (as well as those who shun all alcohol) can still savor the flavor of liquor-enhanced dishes without getting burned by added calories. “There is no one size fits all, but lemons, rice and apple cider vinegars, and almond and vanilla extracts are great alternatives,” Peters suggests. “For instance, when a recipe calls for 1 tablespoon dry vermouth, substitute with 1 tablespoon apple cider vinegar, or instead of ¥ cup red or white wine in a marinade, use ¥ cup rice or apple cider vinegar. These alcohol substitutions create the same memorable taste experience.”

If calories don’t create concern, however, there are practicalities people should consider before saucing up their food. One of the most important is that alcohol can erupt unexpectedly into flames during the cooking process.

To avoid this unappetizing disaster, experts suggest cooks include another liquid, such as water or broth, to dilute the alcohol used in a recipe. What’s more, if the dish is to be baked, to minimize the chance of a possible explosion in the oven, make sure the appliance is in good working condition with its vent unblocked. Also, the alcohol vapors often responsible for these potentially deadly mishaps can be expelled by carefully simmering the alcohol in an open saucepan on top of the stove before adding it to the dish. (Note: Unless you’re a professional chef, Real Health strongly recommends you not try this at home or anywhere else.)

Another concern people have about liquor in food is how the spirits may affect those with alcohol sensitivity. For example, some medications react negatively with alcohol, so anyone on such drugs should just say no to liquored-up dishes. Also, health experts advise children and pregnant women against eating foods made with alcohol. And for recovering alcoholics, liquor-infused dishes are simply out of the question. If in doubt, always inform people when you cook a dish with liquor, even if it’s a trivial amount.

Another rule of thumb: If you can’t drink it, don’t use it to cook. For example, avoid products labeled as cooking wines—these wines contain salt. Use a wine that you would enjoy drinking. It doesn’t need to be a fine wine; any good table wine will do.

And, while we’re on the subject of cooking with wine, it’s important to know why you might want to add a red or a white one to a specific sauce or dish. Typically, red wine is used with heartier, more robust dishes (think juicy cuts of beef and earthy sauces) while white is paired with fish and seafood, poultry, pork, veal and light or cream sauces.

For the greatest convenience, here’s another tip. Buy miniature-sized versions of liquors or bottles of wines. Keep them stored in the cupboard for kitchen use.

Also, if you have leftover wine, freeze it in ice cube trays. These are great to add to stocks, soups and gravies. Can’t tell a dry white from a full-bodied red wine? Do a quick web search for suggestions or visit your favorite wine shop. Chances are the shop owners there will be happy to answer your questions.

Here’s another tip: Just before serving, add a splash of the original alcohol used while preparing the soups, stews, sauces and casseroles. This subtly reinforces the spirit’s flavor in the food.

And, yes, liquor can help create some memorable desserts. But if you’re whipping up a frozen treat, get stingy with the spirits. Alcohol freezes at a lower temperature than other liquids, so it’s not advisable to use excessive amounts in your favorite frozen desserts.

Hungry yet? Reach for that unsampled bottle of whatever you’ve been saving for a special occasion. Now head for the kitchen and use it to treat yourself to a new dining experience.

Whiskey Pecan Drop Candies
In Texas, these are called pralines. When you try them, get ready to taste layers of flavor. The first bite registers a delicious sweetness (sugar), then nuttiness (pecans), then a caramel oak (whiskey) flavor, with a hint of vanilla. Yum!

In a saucepan, stir together the sugars and the sour cream over medium heat until the mixture resembles a soft ball, about 10 minutes. When a candy thermometer registers 240°, add the vanilla and whiskey, stir and remove from the heat. Stir in the pecans. Let sit for 3 minutes, stir, and then drop by the tablespoon onto waxed paper. Let cool and harden, about 2 hours. Wrap and store in a dry place.

Reprinted by permission from The Gourmet’s Guide to Cooking With Liquors and Spirits by Dwayne Ridgaway, Quarry Books, 2010.