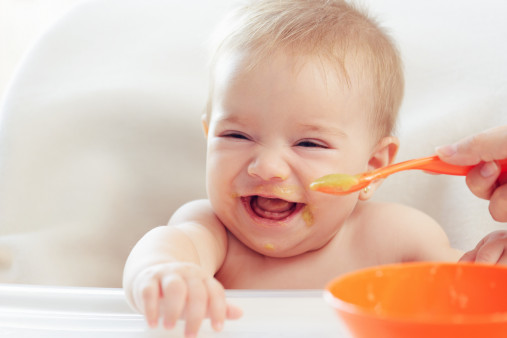 Contaminated rice-based foods, sweet potatoes and fruit juices are among those that threaten a baby’s developing brain.

A recent investigation has revealed that 95% of baby foods tested contain one or more toxic chemicals, including lead, arsenic, mercury and cadmium, which can cause infants to suffer IQ loss and other learning and attention deficits, reports Healthy Babies Bright Futures (HBFF).

For the inquiry, experts tested 168 baby foods across 61 brands. All but nine of the tested products contained at least one of the four toxic metals. Furthermore, 87% of baby foods tested contained more than one poisonous heavy metal, and all four metals were identified in one out of every four foods tested.

Four of seven infant rice cereals assessed contained inorganic arsenic (the toxic form of the chemical) in excess of the action level of 100 parts per billion proposed by the Food and Drug Administration (FDA). In addition, 83% of baby foods tested had more lead than the 1-ppb limit supported by health advocates ,and one of every five foods tested contained more than 10 times that amount.

Researchers noted that there is no federal safety limit for the toxins found in nearly nine out of 10 baby foods tested. “Current arsenic contamination levels in rice cereal and juice are 36% and 75% less, respectively, than the amounts measured a decade ago,” said Jane Houlihan, MSCE, HBBF’s research director and a study author. “When the FDA acts, companies respond. We need the FDA to use their authority more effectively, and much more quickly, to reduce toxic heavy metal in baby foods.”

Experts advise that parents can also do their part to ensure that their young ones don’t consume tainted baby foods. The organization suggests safer and more nutritious alternatives, such as rice-free snacks and non-rice cereal (for example, multigrain and oatmeal cereals), other soothing foods for teething, such as frozen bananas or chilled cucumber, and other vegetables. These foods have 80% reduced levels of toxic heavy metals than riskier foods.