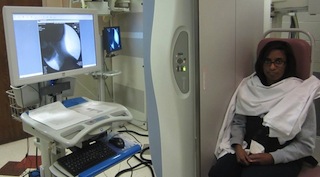 I have been having trouble swallowing liquids for about a year. It was never anything serious. I would sometimes cough after swallowing drinks.

But then, I began coughing vigorously. I was choking on everything I swallowed. Then one day while taking one of my many pills, I choked on a capsule. This time I couldn’t clear my throat. I couldn’t speak. My husband was in another room so I began banging on the dresser with my hand. Luckily he heard me and was able to help clear my throat of the pill.

This really scared me. I thought I was going to die. I called my neurologist and told him about it. He explained that lesions might have damaged my nerves as well as the area of the brain responsible for coordinating swallowing. He suggested I see a speech therapist.

Days later, after hearing my story, the speech therapist seemed very concerned. She explain, when swallowing difficulties are present, food or liquids that you eat may be inhaled into the windpipe instead of going down the esophagus and into the stomach. And once in the lungs, the inhaled food or liquids can cause pneumonia. She thought this might have been happening to me, so she set up a swallow exam. 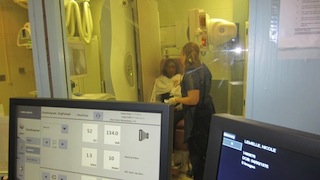 The swallow test involves a radiologist watching an X-rayed esophagus so they can document any noticeable swallowing difficulties.

They fed me food and drinks and X-rayed my throat as I swallowed. It wasn’t some great meal either. The food and drink had a substance called barium in it. The barium coats the esophagus enabling the hollow structure to be seen on the X-ray.

Oh, by the way, the barium tasted terrible.

Next, they captured a series of X-rays to visualize the pathway the barium took to get to my stomach. 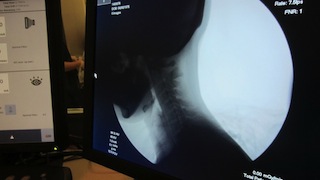 Start to finish; the test was about an hour long.

After seeing the results, my doctor and speech therapist confirmed I was having problems swallowing thin liquids. Because of this, I have an increased risk of catching pneumonia. The suggested plan of action is to thicken my liquids to a nectar consistency. Also, substitute thin liquids with thicker liquid choices such as cream soups for plain broths. And when taking medication, crush pills and mix them with applesauce or pudding.

I bought the suggested thickening agents and I’m supposed to use it with all liquids.

Has anyone else experienced swallowing problems? 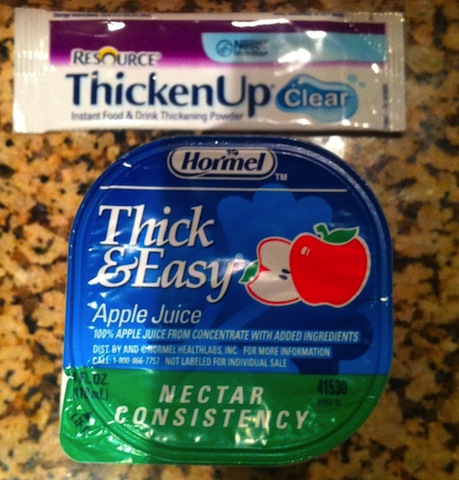