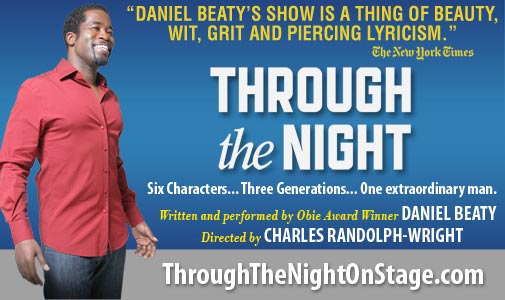 So check this out. Last week, a friend took me to see this play named Through the Night at the Westside Theatre in New York. It’s a one-man show that focuses on--and here’s the kick--black folks’ health. Yeah, really!

Daniel Beaty is the author and star of this show, which tackles many of the major health issues plaguing the African-American community, including HIV, obesity and keeping hope alive (a.k.a. maintaining your mental wellness, strength and resolve).

Beaty portrays a host of characters, among them a young black boy, who still dares to dream despite life’s difficulties; his father, who’s forgotten an important lesson he taught to his son to never quit no matter what; a former prisoner who unknowingly infects his pregnant girlfriend with HIV; an obese, food-addicted preacher and his gay son struggling with revealing his same-sex relationship to his father; and a young survivor of the “special education” school system newly become an academic achiever only to face sexual temptation as he fights to do the right thing for his future and not father a child he’s unprepared to raise.

Deep, huh? That’s what I thought too as Beaty (an award-winning actor) poured his passion (and sweat) into these six complex characters whose lives explore issues that are so relevant to the black community.

They’re also the kind of issues that need more visibility so they can be seen, discussed and addressed by everyone.

Today, HIV continues to take lives in the African-American community. And although many people know more about the virus than they did before, complacency about HIV’s status as a serious health issue and the stigma associated with the illness keeps blacks at risk of acquiring the disease.

That’s why as a health editor, I can appreciate Beaty’s subject matter. And the simple way it’s presented? No sets, no scenery. What can I say? That helps to make you pay attention to what he’s saying.

At a time when black folks’ physical and mental health hangs so precariously, Through the Night shines a light on issues that concern our continued existence on this planet. There are those in our community who think that HIV/AIDS is a conspiracy against African Americans. But I don’t think the black man is being led down the road to genocide by a medical conspiracy. What will take us to that destination are the preventable illnesses we get from the bad decisions we make that affect our health.

I think Through the Night is important because it opens the way having much-needed conversations about our health that we might otherwise not have. This play gives us a chance to speak about the things that make us uncomfortable and break the silence.

And while it’s doing that, you’ll be thoroughly entertained by one helluva good play too!