What Is This Hip-Hop DJ Guilty Of? 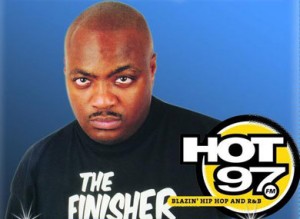 He’s known as “DJ Mister Cee” but his “government name” is Calvin LeBrun and he’s a Hot 97 radio personality with his own show, “Throwback at Noon,” an immensely popular program. (I met Calvin when I was the editor-in-chief of Word Up! magazine, a music magazine that flourished when hip hop was just becoming known and recognized as the way the music trend winds were blowing. He and his MC partner, Big Daddy Kane, were regulars in the magazine’s pages and posters kids loved to tape to their walls.)

Mister Cee, for those who aren’t schooled in hip-hop culture, is a living legend, an icon of the rap from back in the day. That’s good for him. What’s not so good for him is that last week he was busted in New York City’s West Village for allegedly having sex in public--with a man.

That private encounter in a public place allegedly involved Mister Cee and a transgendered person (reputed to be a cross-dresser) named as Lawrence Campbell. The two were observed indulging in oral sex in a car, fully viewable to two police officers sitting in their ride, according to online news stories, such as the one I saw on xxlmag.com.

The cops stated they observed Mister Cee having his “exposed, naked and erect penis” being manipulated by Lawrence who was engaged in the act of using his “mouth and lips in an up-an-down motion consistent with oral sex,” according to the police report detailing the misdemeanor.

But what is Mister Cee being judged for? If you read the flood of comments currently still deluging the Internet, Mister Cee is not being judged for “public lewdness” and “exposure of a person” as the police report charges. He’s being rapped for allegedly having gay sex. And in hip hop, even today, all it takes is a rumor (much less charges on paper in black and white) to get you a life sentence of being subjected to ridicule and scorn forever after.

All of this made me consider the still virulent response people in the black community have to homosexuality, and the resultant stigma this causes that makes folks petrified to acknowledge and embrace their sexual orientation, be themselves and get tested so they know their HIV status.

Whether or not Mister Cee was really caught with his pants down and whether or not what happened with his companion is what the police charged is only known to him.

What I do know is that Mister Cee’s “fans” and the homophobic haters wasted no time in saturating the Internet with vitriol and venom.

About the only high note I saw struck was Hot 97’s decision to keep Mister Cee on the air as fallout mounted. But I’m not that naive either. How long the station’s loyalty will last is, I’m sure, predicated on the number of people tuning in just to see if Mister Cee can continue spinning his jams just like before and get through the craziness like a champ.

Should he falter I daresay he’ll be scratched so fast, it’ll make Mister Cee’s head spin. (But hey, that’s the business of show, folks. So what else is new?)

Now, back to my original question: What’s this hip-hop DJ guilty of? His alleged public lewdness or allegedly having gay sex?

Would love to hear your answers.