Penn. Man Robs Pharmacy Threatening to Use Needle With HIV

Police have arrested a man accused of robbing a pharmacy in Pennsylvania by telling a store worker he was armed with a needle that had HIV, 6abc.com reports. Police said they identified Shivi Brian Neil, 21, a Penn State student, by a fingerprint left at the Rite-Aid store in Wyomissing. Surveillance video shows a man handing a note to a clerk demanding prescription painkillers. The note also informs the clerk that the man has a needle with HIV. Police say the note implied that if the clerk didn’t submit to his demands, he would stick her with the syringe. Police are still investigating if the suspect is responsible for a similar incident. 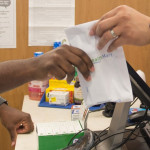 How Black Pharmacists Are Closing The Cultural Gap In Health Care