Many people know Damon Dash best as the cofounder—along with Jay-Z—of Roc-A-Fella Records. But fewer folks may know that Dash learned he had type 1 diabetes as a teenager and thought he wouldn’t make it to adulthood.

“I was urinating a lot and had lost 40 to 50 pounds and was really tired. I felt terrible,” he says. “I just didn’t want to feel like that anymore. I thought I had something else, something that was not curable or livable. I thought I was dying. There were rumors about me. At 16, I was having sex, so girls were getting themselves tested and this type of stuff. I was scared to go to the doctor.”

Although type 1 diabetes is also known as juvenile diabetes, individuals can develop this blood sugar disorder at any age. In addition, more adults than kids suffer from the condition, according to the American Diabetes Association. But it can be months or years before enough beta cells are destroyed to cause noticeable symptoms.

Located in the pancreas, beta cells produce and secrete insulin, the hormone that regulates blood sugar levels. In people with type 1 diabetes, the immune system attacks or destroys these cells, which prevents the body from producing sufficient amounts of the hormone.

To manage the illness, Dash injected insulin, using syringes he toted around in his pockets. Unlike the estimated 30 to 50 percent of diabetes patients who fear pain from injections, Dash didn’t suffer from needle phobia. “When I finally went to the doctor, he told me I was diabetic, and I was extremely happy, so the needle was like nothing for me in order to be able to feel better,” he says.

But Dash was aware of the perception of hypodermic needles as a tool for “dope fiends,” which may cause folks living with diabetes to feel embarrassed about the condition—but that wasn’t the case for him.

“I’m proud of my diabetes because I feel like it defines you to be able to deal with something when God deals you those cards that are kind of tough,” he says. “I perceive diabetes as something that defines me. I think it shows a lot of character and makes me a little cooler because I’m living life and dealing with something that most don’t, and I’m doing it well.”

Properly managing one’s diabetes—whether it’s type 1 or 2—is key to maintaining good health and steering clear of other medical problems. This means controlling blood sugar levels with the correct doses of insulin.

“It’s really important that the level stay within a normal range as much of the time as possible because if not, then, over time, that can lead to some of the complications associated with having diabetes,” explains David Cavan, MD, a leading diabetes doctor based in London.

Such complications include damage to small and large blood vessels and an increased risk for heart attacks and strokes. In addition, the illness is a leading cause of blindness, kidney failure and lower-limb amputations.

But administering insulin correctly isn’t the only way to control diabetes. Individuals must monitor what they eat and track their intake of carbohydrates. Doctors teach patients how to give themselves insulin injections, use an insulin pump and draw blood to test their glucose levels. (Typically, blood sugar is checked several times each day—before meals, at bedtime, before exercising—because levels vary throughout the day.)

“This is a challenge because we teach patients how to adjust their insulin levels based on the carbohydrate content of their food,” says Tom Donner, MD, director of the Diabetes Center at the Johns Hopkins University School of Medicine in Baltimore.

Dash’s main concern was getting his A1C number (a measure of average blood sugar over the previous two to three months) down from a 10 to a 7, the goal of anyone seriously trying to keep his or her diabetes in check. Normal blood glucose levels eluded Dash for years, until he finally made a decision that improved the quality of his life as a type 1 diabetic.

Dash credits his “wifey for lifey,” Raquel (“Rocky”), with helping him implement the lifestyle changes needed to achieve his A1C target. “Rocky presents me with only the right options,” Dash says. “Whether it’s food or whatever—she makes sure I go to the doctor; she makes sure all my stuff is right. That’s what really became my savior; that’s what really filtered into my consciousness and the actions that go along with thinking about the best way to manage diabetes.”

“Diabetes is a slow killer, so when you’re not paying attention to it, you’re not feeling any pain in the moment until later,” he says. “It was me visualizing my future without fingers and not being able to have an erection. I thought, I’m not doing that; I’m going to take care of myself. So any time I got the opportunity, I did.”

When Dash and his wife moved to Los Angeles, Dash immediately checked in with a doctor and asked about any innovations in diabetes care. That’s when he learned about Afrezza, a powdered form of insulin that’s used with an inhaler. He was delighted to hear that he wouldn’t need as many injections and wondered why he’d never heard about the medication.

When Dash used the product and posted a picture of himself on Instagram, the current CEO of the company, Mike Castagna, called him. “He got in touch with me and showed me how to use it right,” Dash says. “I thought, How come nobody knows about this? But then, I said to myself, ‘Damn, I like to discover things first anyway!’”

Inhalable insulin isn’t new. Researchers began working on this form of the hormone during the 1920s, and in the 21st century, improvements in technology helped perfect the drug and a device for delivery.

Then in 2006, the Food and Drug Administration (FDA) approved Exubera, an inhalable insulin that’s since been discontinued. Afrezza received FDA approval in 2014, but the medication has failed to gain a solid foothold in the medical marketplace and still isn’t widely known or used. 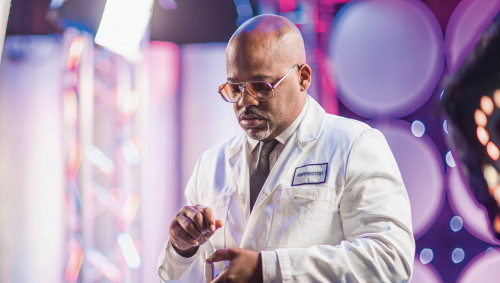 The low uptake of afrezza is due in part to the fact that people with type 1 diabetes still must inject long-acting insulin. Although the med reduces the total number of daily necessary injections by lowering blood sugar at mealtimes, it doesn’t completely eliminate the need for self-injection (except among patients who require insulin only when they’re going to eat).

Besides cutting back on his number of shots, Dash reaped other benefits. “You don’t get keloids—which cause your skin to get hard and develop lumps —because you’re not poking yourself in the same place,” he says. “I didn’t even know I could feel better. Now, my energy is on a whole other level.”

Last year, to educate people about diabetes, Dash launched a website, the Dash Diabetes Network (DDN), which he eventually plans to build into a 24-hour cable channel.

“The first thing that was important to me was for the site to be informative; the next focus will be on more lifestyle-oriented stuff, with a lot of health content,” he says. “Raquel will do all the cooking segments because we recently went vegan, and there’ll be a lot of workouts and yoga. It’s very important for a diabetic to work out. I work out and Rocky works out, so people may prefer to see Rocky more.

“A lot of stuff will revolve around art, and we’re going to do an animated show on UFOs because I really do believe that we can’t be the only people in this universe,” he continues.

In alignment with the mission of DDN, Dash is focused on educating people about diabetes. “Be confident, and think about your future when it comes to diabetes,” he says. “It’s not a now thing; it’s a later thing, so just live a healthy lifestyle and it will work out.

“Never be ashamed of your diabetes,” he adds. “Embrace it!”

A quick look at new devices and therapies in development

There have been a number of advancements in diabetes management since the discovery of insulin. Here are a few of the more notable innovations that are either already making the lives of those with this blood sugar disorder easier or promise to help individuals achieve glycemic control down the road.

Insulin pens have been a godsend for those with diabetes since 1985, when the first such device became available. As technology progresses, these pens will become increasingly more sophisticated, and the functionality of the tool will expand to store data beyond the date, time and doses of insulin someone takes.

Next-generation gadgets will perform a variety of tasks, including logging insulin dosages by amount and type and reminding users to take the correct portion at the right time. In addition, companion apps will help the pen track the last insulin injection, quantity of the medication taken and the amount remaining; produce reports for individuals to share with their health care providers; and allow medical professionals to access patients’ data via a web portal.

What’s more, pharmaceutical companies are spending millions on the research and development of a “smart insulin” that would sense when blood sugar becomes elevated and then act to stabilize levels.

Scientists are also studying the use of the BCG vaccine to normalize the blood sugar of patients with longstanding type 1 diabetes. The vaccine, which has been used for almost a century to prevent tuberculosis, is now the focus of a Phase II study approved by the Food and Drug Administration to investigate this new indication.

Finally, diabetes doctors are eyeing stem cell therapy, which may be able to regenerate beta cells in those with type 1 diabetes and also be useful in the treatment of type 2 diabetes.