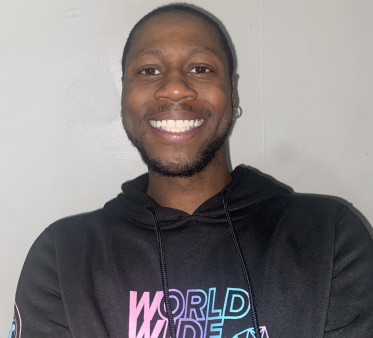 Julian, 23, is an African-American math teacher to junior high schoolers in Chicago. Courtesy of Julian

Two young adults share how they are improving their sexual health.

A big part of coming into adulthood is unlearning childhood messages that can hold us back in our growth and relationships, including when it comes to sexuality and sexual health. Take Fran and Julian, for instance.

Fran is a 24-year-old Latina nutritionist in the Bronx and a single mom to a 6-year-old son. But she says that when she was around her son’s age, her dad caught her exploring her genitalia and became very angry.

“He made a huge thing about it, where my mom had to talk to me and tell me that was bad,” she says. That, she says, left her feeling shame over her sexuality, an issue she’s still working through.

Thankfully, she says, in high school, the school nurse provided free birth control, condoms and, if necessary, abortion referrals. That’s a lot more than most U.S. high schoolers get. But because of that childhood incident, she says, “Ever since, it’s been pretty difficult for me to have an orgasm when I have sex.”

“Grand Theft Auto was all about walking into the strip club and throwing money on the girls. You walk in, ask a girl and she hops on you, because that’s what it looks like in the videos.” He proceeded that way with his first high school girlfriend. “She said, ‘What — you don’t want to start by kissing me? Rubbing me?’ Performing oral sex on women was something I never thought of — that there are other ways to pleasure somebody than standard penetration.”

It’s not unusual for young people in the United States to grow up with sexual baggage and assumptions similar to those of Fran and Julian, in part because sex education in schools is spotty. Even when sex ed does occur, it doesn’t necessarily venture beyond the biological basics to stress the fact that sex should be a source of pleasure, not shame, and should be based on seeing one’s sexual partners, even casual ones, as fellow human beings with needs and feelings of their own.

“Sexual health is all about being able to embrace and enjoy your sexuality throughout your life, because it’s an important part of life,” says Radix. “Often, people think of it as being only about getting treated for sexually transmitted infections (STIs), but it’s also about both your emotional and mental well-being in relation to sexuality.”

“It’s useful to write out a list of questions or concerns beforehand,” Radix says. “You’re less likely to forget or lose your nerve that way.”

Ideally, says Radix, a provider will gently bring up sexual health as a part of your overall health, but not all providers have yet been trained to do so — something organizations like ASHA are trying to change. If your provider isn’t open to hearing your concerns around sex, he says, you may want to look elsewhere.

You may want to discuss with your provider regularly getting tested for STIs, such as HIV, syphilis, gonorrhea and chlamydia, even if you believe you’re in a monogamous relationship — you don’t necessarily know your partner’s entire sexual history.

You may want to discuss preventive options, such as condoms, going on pre-exposure prophylaxis (PrEP) to prevent HIV or getting vaccinated for hepatitis A or B or for human papillomavirus (HPV), some strains of which are known to cause various types of cancer.

That’s something Fran is slowly learning in her 20s. She sees her gynecologist and gets tested for STIs  every six months. During the COVID-19 pandemic, she says, she’s seeing one person, “but usually I’ll be dating a few people at a time.” She uses condoms with partners until they’re close enough to talk about, and then share, their most recent STI results. “I like to have that conversation with my partner,” she says. “I’ve had moments where men get offended. They try to flip the table and say, ‘Why are you bringing this up? Do you have something you’re hiding from me?’ But most men I know don’t even have a primary care doctor, so I’m pretty insistent on condoms. We have to be able to communicate and respect each other’s boundaries.”

She’s trying to extend that communication to her own son, to bring him up with the healthy, open, shame-free sexuality she was deprived of.

“We go to therapy together, and the therapist encouraged me to talk to him about sexual exploration,” she says. “So we sat down, and I said to him, ‘These are your body parts, and you have the right to explore them, and if it feels good, that’s OK. Just do it in private and by yourself.’” However, she admits, “I’m still struggling with letting go.”

Meanwhile, Julian has his first serious girlfriend since college. They’re sexually monogamous, he says, after having both been tested for STIs, and he’s learning that the best sex for him is about a give-and-take, not about scoring points to tell his friends about.

“Just having someone to talk to and listen to at the end of the day — that’s really sexy,” he says. Full-on sex is terrific, he says, “but even things like a hug or a kiss on the forehead might not give me an erection, but they’ll make me smile.”

He says he wants to gently give his young male students a message he didn’t receive growing up — that women aren’t just sexual objects but human beings. “You have to make it personal for them and say, ‘That’s not a bitch or a hoe — that’s somebody’s mother, somebody’s sister, somebody’s best friend.’”

Click here to read 10 tips for improving your sex life.