Evelyn Lozada of Basketball Wives reflects on the forces that shaped her into an advocate for female empowerment.

Evelyn Lozada prides herself on thinking strategically. The 42-year-old native New Yorker, who was born in Brooklyn, was the first person Shaunie O’Neal, the creator and executive producer of Basketball Wives (BBW), invited to join the cast of the VH1 reality show that follows the lives of women who are married or otherwise connected to players in the NBA. Lozada had just launched a high-end shoe store in Coral Gables, Florida, and was separating from her partner of 10 years, Antoine Walker, who at the time played with the Boston Celtics as a power forward. At first, Lozada didn’t know how she would fit into the show.

“I agreed to do it mainly because of this business that I had, because in my mind, I said, OK, well, this can be great for my shoe store, you know, exposure,” Lozada says.

Six years ago, Lozada experienced an epiphany when she saw her stepdaughter imitate an incident from an episode of the show in which Lozada threw a bottle at a cast mate, triggering massive criticism from viewers. The backlash prompted Lozada to write a letter to her 7-year-old self in which she reflected on her behavior and recognized her accountability for the effects her “grown-up actions were having on the next generation of little ones who watch negative and abusive moments unfold on television.”

According to findings from the Girl Scout Research Institute, all girls ages 11 to 17 who were surveyed felt that reality shows promote bad behavior. In addition, those who were regular viewers of these kinds of programs accepted and expected higher levels of drama, aggression and bullying in their lives. 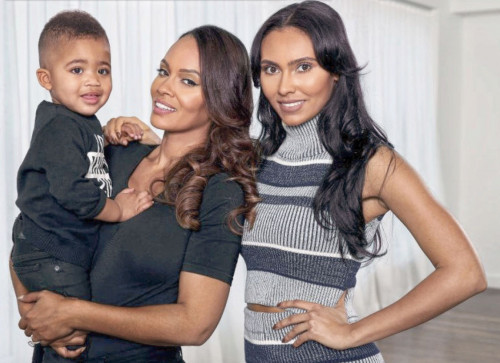 Evelyn Lozada with her son, Carl Leo Crawford, and her daughter, Shaniece Hairston.Courtesy of Evelyn Lozada

Observes Holly S. Peek, MD, MPH, the assistant medical director of the Klarman Eating Disorders Center at McLean Hospital in Belmont, Massachusetts, “As we try to discourage bullying, gossiping and other forms of interpersonal aggression between young girls, it’s unfortunate that reality shows often feature adults behaving in exactly this manner, all the while continuing to gain popularity in mainstream media.”

In the letter, Lozada tells her childhood self that one day young kids will be watching her on TV, a good reason to behave better.

Lozada showed another side of herself on Livin’ Lozada, a reality show on OWN that followed her life in Los Angeles with her 24-year-old daughter, Shaniece Hairston, a model.

The effect reality shows have on viewers, especially young girls and women, has been well documented. But these shows also have psychological repercussions for those in front of the camera.

“People have no idea how hard it is to do what we do,’” Lozada says. “A lot of us have children. Sometimes somebody will do it for one season and they’re done because you really have to have very thick skin to do this.”

In 2012, Lozada’s brief marriage to football player Chad “Ochocinco” Johnson ended after she accused him of head-butting her during an argument. (He pleaded no contest and got one year of probation. He later served seven days in jail after a judge ruled that he had disrespected her court by patting his lawyer on the butt during a hearing for a probation violation.)

Since the divorce, she launched the Evelyn Lozada Foundation.

Its mission is to shine a spotlight on the uncomfortable topic of domestic abuse, its survivors and the overall empowerment of women and young girls. Lozada leverages her position and platform to support and bring visibility to the work of the hands-on, grassroots organizations that conduct the actual work.

“Turning away from an abusive relationship is not easy, but it’s necessary. I always say that it was easy for me to pack up, leave and move across the country because financially I was doing OK and had the support of my family,” Lozada says. “I can’t imagine not being able to leave. My experience has taught me that over time, matters of the heart can be healed, and, with a support system, self-confidence and self-worth can be restored.”

But Lozada wants to empower as many people as she can to leave such abusive relationships. “I’ve had men reach out to me who have been domestic violence survivors in their relationships,” she says.

Lozada, who, at press time, was preparing to launch a jewelry and skin care line, says she’s happy that her efforts to improve herself and change her behavior have generated support from many of the show’s viewers.

“Every week, I get tweets from people who tell me that they love the new Evelyn, how I am with my kids and the type of mom I am,” she says. “Years ago, I would never have thought that people would look at me as a role model.” 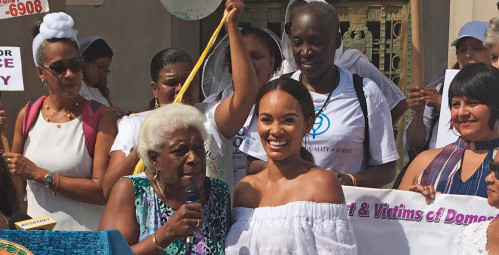 Evelyn Lozada with women at a march and rally to end domstic violence.Courtesy of Evelyn Lozada

Reality TV: A Guide for Parents

Communication can help your kids watch these shows with a more critical eye.

Ask your kids which reality shows are their favorites and which ones their friends view. See for yourself whether the programs are appropriate for your children’s ages. If necessary, enforce a minimum age requirement for viewing specific shows.

Watch reality programs with your kids. Start a conversation about whether these shows are true to life or whether they sensationalize events to reel in viewers and boost ratings. Offer comments about the events taking place in the shows and how real they may be in order to prompt your children to question what they’re seeing.

Find out which incidents your children believe are real. Once the discussion gets going, ask kids to compare how people in reality shows behave to how individuals in their lives act.

Ask your children whether anything they’ve seen on a reality show has ever bothered them. Try to find out whether youngsters think that how folks behave in these programs is acceptable or unacceptable and how they feel about the values portrayed in the shows. Find out whether they respect the show’s cast.

Learn how your children feel about various cast members. Viewers admire or reject reality show stars for many different reasons. Which ones appeal to your kids and which ones don’t and why? How do their friends feel about the same individuals? Do they agree or disagree with the assessments of their peers?