Montel Williams is working with an online platform to help people with multiple sclerosis share their experiences and connect with others.

Montel Williams and multiple sclerosis (MS) are well acquainted. The Emmy Award–winning former talk show host and television personality was finally correctly diagnosed with the autoimmune disease in 1999, at age 43, almost two decades after he first exhibited symptoms. That’s how long it took physicians to identify the elusive culprit that punished his body with sporadic attacks that left him with a slew of alarming, unexplained health issues, including temporary vision loss and excruciating leg and foot pain.

“I had difficulty explaining the disease to anyone, including the doctors,” Williams says. “The doctors and caregivers didn’t understand what I was going through.

“Here it is another 20 years later,and my disease has been a roller coaster,” he continues. “Some of my symptoms have abated, and some of them have gotten worse.”

In 2018, Williams suffered a hemorrhagic stroke from which he’s since recovered. “But my MS has been manageable, so that’s been helpful for me,” he says. “MS doesn’t necessarily get worse for everyone as they get older; some of us stay in a specific category.”

According to the most current statistics from the Multiple Sclerosis Association of America, the illness affects nearly 1 million people in the United States and 2.3 to 2.5 million people worldwide. The disease can strike people in all ethnic groups but is more common among Caucasians. MS also affects more women than men.

In people with MS, the immune system attacks and destroys the myelin sheath—a fatty material that covers and protects nerve fibers and helps transmit electrical signals throughout the brain and spinal cord. Without myelin, communication between the brain and other parts of the body breaks down, causing a lack of sensation and motor control.

The inflammatory condition can be difficult to diagnose. Someone could have MS and be unaware of it, as no currently available lab tests can confirm the disease. What’s more, symptoms of the illness can vary widely. In order to diagnose MS, doctors use MRI scanning and apply specific guidelines to symptoms that occur within a certain window of time.

Symptoms of MS can be mild—and easily overlooked—or severe. They may include abnormal fatigue, intermittent numbness, tingling and tremors that may come and go. In severe cases, people experience permanent symptoms that might include partial or complete paralysis.

Additionally, MS can lead to cognitive impairment that may affect memory and concentration.

Treatment to help manage the disease should start as soon as possible to delay its progression and prevent damage to the central nervous system. Early medical interventions that target the inflammation present can help protect nerve fibers and brain tissue from being injured.

Since there is no cure for MS, doctors emphasize proper management of the disease via drug regimens and lifestyle changes.

“I’ve changed my diet from the day I was diagnosed, and I try my best to incorporate as many plant-based foods as I can and focus on eating in a way that reduces inflammation,” Williams says.

In addition, the former Marine follows a consistent regimen of physical activity and stays current on the illness via news he finds online. “Information is king,” he says. “You can google MS and find hundreds, if not thousands, of documents [about the disease]. The most important thing that people with MS can do is arm themselves with knowledge.”

This is why Williams partnered with the Multiple Sclerosis Association of America and the pharmaceutical company Novartis to become a spokesperson for the My MS Second Act initiative. The educational program—hosted on the online storytelling platform The Moth—enables those with multiple sclerosis to share their stories with the MS community.

As an MS advocate for 20 years, Williams believes that even though many people living with MS may share core symptoms, those with less common signs of the illness may find it challenging to explain their condition to family, friends and even care providers.

Because no two patients suffer exactly the same symptoms, sharing personal experiences is essential, Williams explains. “My MS Second Act teaches people how to develop their stories and own and share them with others, which may help people see something in another person’s experience that may be similar in themselves.” (Find the storytelling tool kit at mymsaa.org.) 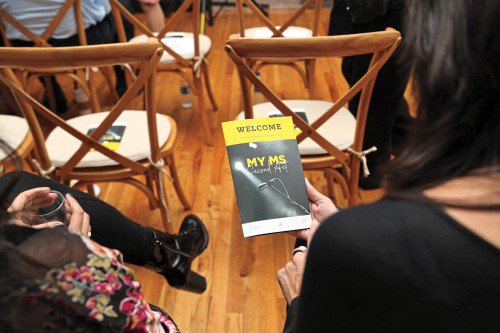 Through the years, Williams’s advocacy work has helped sustain him, and he encourages others to advocate for themselves. “A lot of us sit back and wait for someone else to tell us what’s going to happen to us or what they think is going to happen to us,” he says. “But we know there aren’t any crystal balls, so it’s important to be your own advocate and get as much knowledge as you can from different resources.”

My MS Second Act also encourages people living with MS to be more proactive in taking notice of signs of disease progression and to speak confidently with their doctors and loved ones about their symptoms as they advance. In this way, people with MS can take charge of the disease and find a path to healthy aging with MS. As time passes and those living with the illness grow older, the appearance of any new issue should be evaluated in order to differentiate whether it’s related to normal aging or is a new symptom of MS.

“I’ve been dealing with this [his age-related MS symptoms] for close to four years as I’ve been getting older,” Williams says. “I happen to be fortunate that I’ve been on lots of programs and done research and looked at different things and I’ve been able to stay resilient.”

After being diagnosed with MS, everyone is affected differently. “People need to know these things and understand that only you alone can impact your illness; you must apply yourself and try your best to do the things that you find work for you,” Williams says. “But you’ve got to stay on it.”

He reiterates how valuable it is for those with MS to keep searching for information that may lighten the burden of the disease. “There are programs out there that can help those who can’t afford their medication,” he says.

Williams chooses to be an optimistic advocate. “I think everyone in this country knows what’s going on with our medical establishment, and it’s of no value to castigate and cast aspersions [at our health systems],” he observes.

“It’s of value to focus on the things that do work,” he says. “I think that as we move forward as a nation, we will try our best to be more inclusive and make sure that there’s access for everyone.”

In the meantime, Williams constantly strives to adapt to, as well as overcome, any adversity his illness triggers. “As long as I can do that, I see hope in every day,” he says.

A trace of defiance is always tangible in Williams’s voice when he speaks about MS. Early in his journey juggling the ups and downs of this progressive illness, a doctor told him he’d probably be in a wheelchair within five years. Since then, Williams has employed a variety of strategies that have helped him outpace that prediction. 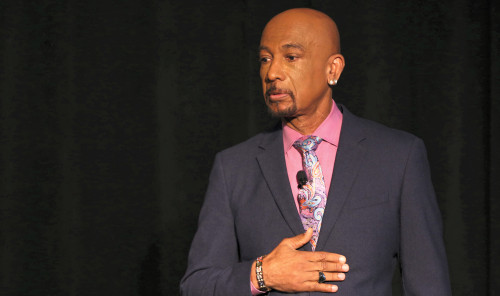 “Long before I became an advocate, I learned that I alone own the definition of who I am,” he says. The statement is a mantra that’s helped him defy the diagnosis he received decades ago.

Now, 63, Williams is still standing and walking tall—except on those days when he takes a seat to talk to others with MS about effective ways to tell their own stories.

Generally, people most commonly experience one of three types of MS.

MS is difficult to diagnose. What’s more, it’s impossible to predict who will experience the most severe stage of the disease. And because the illness does not present the same way in everyone, treatment varies. However, most experts advise those affected to get their symptoms checked out by a doctor as soon as possible in order to help protect the health of the nervous system and the brain. The three most common types of MS are:

Relapsing-Remitting MS (RMMS) is the most common form of multiple sclerosis; 85% of patients are at this stage when first diagnosed. This type of MS is characterized by periods of recovery or remission and phases that involve new symptoms of the illness or a worsening of existing symptoms.

Secondary-Progressive MS (SPMS) is a stage of slow, steady progression of MS that follows the previous course of the illness. This is when symptoms may worsen as time passes. SPMS can be active or nonactive, with or without progression. If there is no recurrence of symptoms or new symptoms don’t arise during this stage, the illness doesn’t progress. But when symptoms do recur or new ones present themselves, the disease can get progressively worse.

Primary-Progressive MS (PPMS) is a pattern of illness marked by symptoms that steadily worsen from the illness’s onset, with no periods of relapse, remission or relief of symptoms. This type of MS affects about 15% of people living with the disease.

Experts advise that treatment, along with lifestyle changes, can shift the course of the disease for many people. The key, they stress, is to be proactive in getting the best care for yourself at any stage of MS.