The day before she had a stroke, 52-year-old Beverly Paige burned her hand while cooking on the grill. Years later, she remembers this mishap and other similar events as warning signs that she ignored—until it was too late. 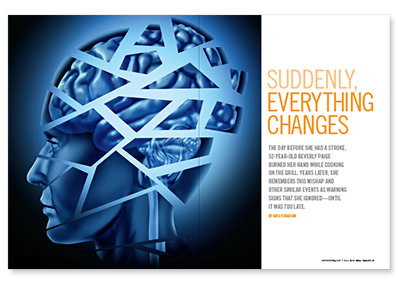 Click here to read a digital edition of this article.
For New Yorker Beverly Paige, June 25, 2007, dawned like any other. The day was perfect, and everything was the way it should be. Paige was on her way to dinner with her sister and nephew. The occasion was a celebration for her nephew’s 18th birthday. As Paige sat in the car reading and talking, she felt fine. Then, she decided to move to the backseat. But when she prepared to get out of the vehicle, she felt as if her right foot had fallen asleep. Paige asked for someone to help her get out of the car. As her nephew reached for her, Paige realized with a shock that she couldn’t feel anything. Then, she heard her nephew say, “Something’s wrong.” Time seemed to stand still as she watched everyone’s mouths move and their eyes grow wide.

On a day that was to be a happy occasion, Paige suffered a hemorrhagic stroke. The dangerous condition happens when a blood vessel in the brain leaks or ruptures and causes bleeding in the brain. Most commonly, hemorrhagic strokes result from uncontrolled high blood pressure or an aneurysm (when a weak area in a blood vessel wall causes a bulging or ballooning that can rupture and bleed).

Hemorrhagic strokes are considered deadly, but Paige was lucky. She awoke in Lenox Hill Hospital where she spent three days in the intensive care unit then two days out of the ICU. Then she moved from Lenox Hill to a rehabilitation hospital for therapy. She couldn’t speak, stand or walk, and she suffered temporary facial disfigurement. “I had aphasia”—the loss of the ability to use and comprehend words—“and paralysis along the entire right side of my body,” Paige says. “I had to be shown how to eat and how to use my hands to pick up a fork. Someone had to come and help me dress, and they wouldn’t let me go to the bathroom on my own.”

According to the Centers for Disease Control and Prevention, each year almost 800,000 people in the United States have a stroke. In addition, although stroke is a leading cause of death for all Americans, African Americans’ risk of having a first stroke is almost twice that of whites. What’s more, African Americans are also more likely than whites to die after having a stroke. And if you have a stroke and it doesn’t claim your life, you may suffer from serious long-term disability.

As she sat in her wheelchair in the rehab hospital, Paige was concerned about this very issue. She realized it would be a long time before she could reclaim her independence and her health. During her first year of continuous rehabilitation, she had intensive physical, occupational and speech therapy. Paige also underwent additional physical therapy at another facility where she joined the gym. While she struggled through the workouts, she thought wryly about her days as an aerobics class instructor. “There’s a level of depression that comes,” Paige says today, looking back at the experience. “Anyone who has ever had a stroke knows that it’s also a mind disease. You know what you have to do to get up and walk, but you know you’re not going to walk the same, so it becomes a downer that starts getting deeper and deeper.”

Paige confronted herself often. She’d tell herself that there was so much she’d be unable to do, that she wasn’t going to be the same person. She’d torment herself with questions, wanting to reach out to friends and family, but asking herself if they’d be able to understand her. “I cut off a lot of things,” Paige says. “I stopped calling people.” 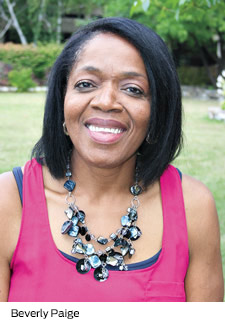 But, gradually, Paige rallied. The days she spent in therapy relearning how to speak, then stand and then walk allowed her to slowly reclaim her independence. After a little more than three months, Paige could comb her hair, shower, even take herself to the bathroom. When she was allowed to return home, she realized that she wanted and needed to reach out to people.

“You still have to keep your mind active,” she says. “So I went and took some classes to help me with the aphasia and speaking.”

Paige enrolled in English language arts classes at Rockland Community College. “I found myself in the classroom with these young minds,” she says, “and that really helped me.” Paige had regained her ability to speak, and she was completely mobile. But she still had a problem with her right foot and so couldn’t wear her usual high heels.

At her graduation from the community college, Paige took home honors. On the same day, her nephew also graduated from the University of Pennsylvania. “That’s when I got the drive to continue my education,” Paige says. She enrolled in Purchase College in the State University of New York.

But Paige also wanted to do something else. She’d become interested in advocacy. She began speaking and working with people who had suffered strokes. “Some of them couldn’t even get out of a wheelchair or speak,” Paige says. “I could see in their eyes that it’s such a deep and dark a place you can get to, because people can’t understand you. Stroke can be a devastating condition.”

Interestingly, Paige had advance notice of just how devastating stroke can be. “Two years before I had the stroke, my father had a stroke,” she says. “And my mother, sister and father had high blood pressure.”

But despite her family’s history of hypertension, Paige never thought she was at risk of the condition. Only after she had a stroke did she make the connection between high blood pressure and “these crazy headaches first thing in the morning” and her stressful work as the vice president of media relations at Universal Music. Paige thought that because she exercised regularly and ate healthy she wasn’t at risk of the illness. It’s ironic, as her sister points out, that Paige used to think her family members weren’t paying enough attention to their health—and yet Paige is the one who had a stroke.

Eleven years before the stroke, Paige visited the doctor with her sister once. He told her that she had borderline high blood pressure. The doctor put her on medication, but she discontinued taking the drug because it made her feel sick. “I said forget it. I’m just going to exercise more and eat less, and then I’ll be OK,” Paige recalls. “I was under a lot of pressure—a single parent who was working, with a teenage daughter, and I had a home [to pay for]—and I just felt like I had to keep going.”

But it all proved to be her undoing. “My youngest sister had kept telling me to come with her to the doctor because of the headaches I kept getting,” Paige says. “She told me that if family members had high blood pressure I might have it too. But I’d ignored that.”

Paige, like many people, ignored many of the common warning signs of stroke. In Paige’s case, there were the uncontrollable risk factors of her father having a stroke and of high blood pressure running in her family. In addition, she also suffered chronic unexplained headaches and vision problems, “flashes of light if I looked at something; I’d think it was my contact lenses moving,” Paige says. “Then I fell down the stairs walking to one of my rooms. I wondered how that happened. I knew my house blindfolded.”

Although she found these incidents strange, Paige remained clueless. “I realized after I had the stroke that those are all signs,” she says.

Of course, there are many other warning symptoms of stroke. Ac-cording to the American Association of Neurological Surgeons, the range and severity of early stroke symptoms vary considerably. But stroke signs share one common characteristic: They shouldn’t be ignored