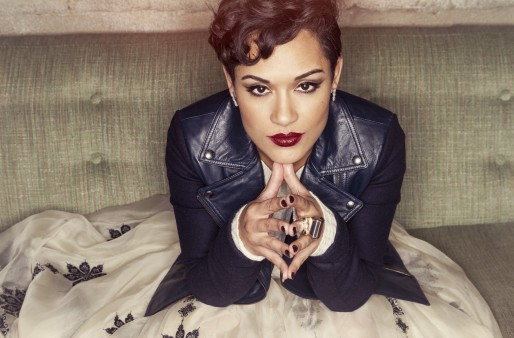 As the child of deaf parents, this Empire star learned early that compassion and kindness can cure stigma.

When asked about her first recollection of her parents being deaf, a pregnant pause settles before actress Grace Gealey answers. There was nothing to compare it to, she says. “That’s not something that happens in children. Whatever circumstance you grow up in is exactly what you deem to be normal.”

Gealey explains that she was 7 or 8 years old when the realization dawned that there was a difference between her parents and other mothers and fathers. “But it was more of an outside perspective than one from the inside,” she says. “I realized not that my parents were deaf, but that other parents could hear.”

Gealey’s explanation crystallizes a key experience that defines deaf culture. As the child of deaf parents, she identifies as a member of a distinct cultural group with its own language, beliefs, attitudes, history, norms, values, literary traditions and art. But like it does for many children of deaf adults, or CODA for short, the realization made Gealey feel different.

“The way that I had to communicate with my mom, and the things that I had to do and deal with as a child, other people didn’t have to deal with,” she says. “That made me go, ‘Oh, wow, this isn’t normal according to society, and people do view me differently.’ I felt like I was a black sheep for sure.”

Although children of deaf parents are unique individuals who lead very different lives, they often share common experiences. Many may feel like they’re straddling the fence, with one foot in the hearing world and the other in deaf culture.

In general, kids of deaf adults must assume responsibility for communicating with hearing family members, interacting with others and making a variety of decisions on behalf of their parents.

At times, these responsibilities may result in children “taking care of duties normally handled by a parent,” note researchers Jenny L. Singleton and Matthew D. Tittle, authors of a review article on deaf parents and their hearing children, published in the Journal of Deaf Studies and Deaf Education.

“Parent-teacher meetings, I had to interpret them,” Gealey recalls. “The teacher couldn’t speak directly to my mom like another teacher would, with me sitting there saying nothing. I had to be the one to tell my mom what the teacher was saying and tell the teacher what my mom was saying, so interpreting was a big thing. My sister and I were my mom’s ears. If we had to make any phone calls for my mother, we would share that responsibility.”

Adds Gealey, “I think, in a lot of ways, these responsibilities matured us and instilled a different level of compassion and grace that we probably wouldn’t have if we were raised without having to take on these duties.”

Without pausing, Gealey exhibits some of that graciousness. “And that’s not to say that people who don’t have to assume these responsibilities don’t have these sensibilities,” she adds. “I’m just saying that doing these things requires a different level of sacrifice and provides that extra layer of compassion and grace.”

In deaf culture, learning how to communicate is a key skill that lays the foundation of a community peopled by a diverse group of members. Individuals in the deaf community range from those with profound hearing loss to children of deaf adults, such as Gealey and her sister, Faith, who have no hearing concerns. Deaf people use American Sign Language (ASL), the linguistic medium that’s recognized as the primary way for deaf adults in the United States to communicate.

The Gealey girls learned sign language at an early age so they could communicate with their parents. “I think my sister started at 18 months and I started at about 2 or 3, so we were signing practically at the same time we were learning how to speak words,” Gealey says.

In general, ASL developed as a mix of signing communication systems from multiple sources. Linguists theorize that ASL is based on the French Sign Language system, plus local signing created by pockets of small American communities populated by deaf residents. These homegrown sign languages spread from the first public school established for deaf children in the United States in 1817. That school was founded by Thomas Gallaudet (of Gallaudet University fame) and called the Connecticut Asylum for the Education and Instruction of Deaf and Dumb Persons. There, Gallaudet taught ASL alongside the French Sign Language teacher he brought back with him from Paris, where he traveled to learn this method of communication.

Today, Gallaudet’s name for this school might raise eyebrows. But during his time, people used the word “dumb” to describe the inability to speak. Still, many people in the United States in the 1800s also believed deaf people suffered from cognitive impairment.

After Gallaudet got a land grant from the federal government, he changed the name of the school to the American School for the Deaf (ASD).Today, it is the oldest school for deaf people in the United States. What’s more, ASD served as a model for the education of deaf students in learning sign language and achieving literacy.

Interestingly, signing isn’t universal in the deaf community. This language of eyes, hands, body gestures and facial expressions differs in various countries. According to the National Association of the Deaf, each country has its own sign language, with regional dialects and unique rules of grammar and syntax that continue to evolve.

Despite these changes, however, some things remain the same. Many people still perceive being deaf as a disability, a perception that Gealey passionately dislikes. “I don’t like to hear my mom being called disabled, because there is nothing she can’t do,” she says. “Nowadays, with technology and the way communication is set up, she is very independent and she can pretty much do anything that anyone else does, including send and get e-mail and search the Internet, and she carries her phone with her at all times.”

Gealey’s mom uses teletypewriter, or TTY, technology, “which is the deaf version of the telephone, so she can communicate with her friends,” Gealey says.In addition, TTY relay services allow deaf people to call their hearing family and friends, and reach out to others too. Gealey’s mother also has closed captioning on her TV so she can enjoy watching programs—particularly her daughter’s.

“I think a lot of times there is a negative connotation that’s associated with the word disabled or disability,” continues Gealey. “Personally, I don’t like to use those words. But I think there has to be another level of attention and sensitivity to the fact that, yes, even though my mom can do what every one else does, there is the reality that she’s deaf and so that’s going to affect the way that she communicates.”

Another attitude Gealey despises is the stigma that’s still attached to being deaf. “I feel like a lot of times people assume that deaf people are unintelligent, or because there’s a communication barrier, I find that a lot of people in our society mistake that for someone not being smart enough to communicate,” she says.

Then, flashing a little of Anika “Boo Boo Kitty” Calhoun, the character she plays on Empire, Gealey fumes: “People will actually speak to my mom like she is 4. She’s in her 60s, OK? My mother is an adult and there’s no need to talk to her like she’s a child. She can understand you very well; you just have to learn how to communicate with her. Perhaps speak a little slower, so she can read your lips, or write something down on a piece of paper. But don’t regard her in a certain way, or disregard her, because she’s deaf.”

Gealey says her mom “is completely obsessed with the show.” And she’s not alone; indeed, Fox renewed Empire for a third season. On March 30, the popular series about the Lyon family’s music dynasty will return, featuring Gealey in the star-making role that made the Cayman Island-born actress well-known to fans of the show everywhere.