If the Shoe Fits

Only one person can decide if barefoot running is comfortable for you.

In 1960, lean, wiry Abebe Bikila, an Ethiopian distance runner, glided into Rome’s Olympic stadium and smashed the world record for the marathon. But even more memorable than that was the sight of Bikila’s bare feet on the pavement as he pounded toward the finish line. Today, the sight of an unshod runner still prompts stares even though the trend has become popular. But is this practice safe?

According to the American Podiatric Medical Association, although some reports have concluded that running sans shoes can support a more natural running gait and improve a runner’s balance and strength, the practice “may lead to injuries such as puncture wounds, and increased stress on the lower extremities.”

But other findings showed that the heel of runners wearing shoes suffered greater force when their feet hit the ground. When people run barefoot, their feet automatically touch the ground at midpoint or a little above that, scientists say. The result? Fewer foot injuries and less discomfort and pain.

If you want to try trotting about without sneakers, experts suggest a common-sense approach: Ease into it slowly, one step at a time. 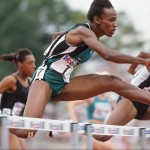