Retire the Word “Risk” When Talking About HIV and Black Women

“Women at risk for HIV.” “Risky behavior.” “On the down low.” “High-risk sex.” Such phrases frame conversations about HIV prevention in terms of stigma, fear and judgment. Risk to Reasons, a new initiative from ViiV Healthcare spearheaded by and for Black women, aims to retire the concept of risk and reframe the discussion about HIV.

The initiative is the result of the Black Women’s Working Group to Reframe Risk, a collection of advocates, researchers, communications experts and Black women living with and working in HIV. Established by ViiV Healthcare, the group convened several times and has now published its findings, “From Risk to Reasons: A Guide for Communicating and Connecting with Black Women about HIV” (click the link to read it online and to download it for free).

What’s more, the $5 million initiative will fund community action and connect advocates across the nation. The Risk to Reasons funding cycle is open now; the deadline to apply for grants is June 27. Visit ViiV’s Positive Action for Women page for links to the application and related information. 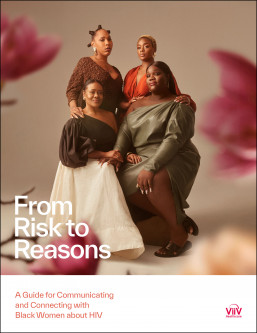 Initiatives like this are vital to ending the HIV epidemic because the virus disproportionately affects Black women. “Black women comprise 55% of new HIV diagnoses among cisgender women and 46% of new diagnoses among transgender women, despite making up less than 15% of the female population.… Each year, more than 4,100 Black women receive an HIV diagnosis,” write the guide’s authors. “However, nearly 10 years after PrEP [pre-exposure prophylaxis, pills and injections that can prevent HIV] first became available, only 10% of women who could benefit from it were prescribed it.”

Clearly, new approaches are needed to reach and empower Black women when it comes to HIV prevention and care. With that in mind, the guide is most useful to HIV service providers, health care professionals, journalists, advocates, educators, researchers, funders and public health officials, all of whom are urged to reframe the way they discuss HIV and promote prevention of the virus . But how? Of course, the guide offers new language and concepts, but first, it clarifies the trouble with focusing on risk:

“When it comes to HIV, the very language designed to raise women’s awareness and motivate them to practice prevention—“risk”—is often counterproductive and off-putting. Terms like “at-risk,” “high-risk,” “risk-factors” and “risky behaviors” abound. Community members, advocates and providers from the HIV movement have known for years that in the context of HIV, the word “risk” is unspecific and stigmatizing. It can cause people to disassociate, rather than reflect on their potential prevention needs.

“For Black women, the greatest “risk” for HIV may be poverty, homelessness, where you live, intimate partner violence or other social determinants—which are rarely captured in the campaign messages, questionnaires or intake materials used to identify who should be counseled on or connected to preventive HIV care. To disrupt the disproportionate impact of HIV among Black women, new approaches are needed that empower women to protect their health and reflect the diverse and complex experiences of Black women.…

“Because Black women’s sexuality has been policed and pathologized throughout history, it is especially important to find language and approaches that support their desires, address their unique circumstances, enhance intimacy and avoid stigma, shame and re-traumatization.”

The ViiV Healthcare team presented the Risk to Reason initiative at Iris House’s Women as the Face of AIDS Summit earlier this week:

What are some effective alternatives to talking about risky behavior? The guide recommends talking about “reasons for HIV prevention.” Discussing HIV in terms of “reasons” invokes “personal choices, power, autonomy and privacy…and provides a more expansive, inclusive and affirming lens,” the authors write.

For example, instead of saying “women at risk for HIV” say “women with reasons for HIV prevention.” Instead of claiming “a woman engages in high-risk behavior,” say “she’s got her own reasons for prevention.”

Furthermore, centering discussions about HIV on risky behaviors moves the conversation away from more empowering topics of prevention and care, notably the wide range of prevention options available today. Examples include:

To learn more about these prevention options, see the POZ Basics section on HIV Prevention. And to read about HIV in these specific population groups, see “HIV and Women,” “HIV and Transgender People” and “HIV and African Americans.”