Keynote speaker Celeste Watkins-Hayes, left, with an attendee at Iris House’s 2022 Women as the Face of AIDS Summit. Facebook/Iris House

The Women as the Face of AIDS Summit, organized by Iris House, also honored three trailblazing women working to end the HIV epidemic.

Racism, women, HIV and activism—these topics and how they intersect were the main focus at the 17th annual Women as the Face of AIDS Summit, held May 2 and organized by Iris House, a New York City–based center for women and families fighting HIV. The summit’s theme was “Racism: The Hidden Driver of HIV.”

“BIPOC [Black, indigenous and people of color] women continue to be a vulnerable population, and this event meets a great need in our community for them,” Iris House executive director Ingrid Floyd explained in a statement about the HIV summit. “Women’s health being at the forefront, while providing a space to create discourse around such issues, gives credence to this annual event.”

This was the first time since 2019 that the event was held in person, though many of the discussions were available virtually, and several speeches have been posted on social media, like the keynote address below:

Celeste Watkins-Hayes, PhD, a professor of sociology at the University of Michigan’s Gerald R. Ford School of Public Policy, delivered the keynote address, titled “When and Where We Enter: Toward a Feminist, Anti-Racist Agenda.” You can watch her speech in the Facebook post above and here.

The summit also honored three trailblazing women working to end HIV: activist and speaker Marvelyn Brown, peer educator and The Well Project Ambassador Maria Mejia and the founder and CEO of Lady BurgAndy Masonia Traylor. (For a collection of POZ articles on each woman, click Brown, Mejia and Traylor.)

In addition to speakers and a networking luncheon, the summit included a dozen breakout sessions as well as a presentation by ViiV Healthcare about its newest initiative, “From Risk to Reason—Reframing HIV Prevention and Care for Black Women.”

During the breakout sessions, participants explored topics such as “Racial and Ethical Considerations Around Breast/Chestfeeding for Women and Other Parents Living with HIV,” “Prevention of Domestic Violence Among Vulnerable Communities—Prioritizing Healthy Relationships and Planning for Safety” and “The Invisible Black Womxn—Centering Black Women, Femmes and Girls in Conversation About HIV Care and Treatment.”

Keynote speaker Watkins-Hayes is also the author of Remaking a Life: How Women Living With HIV/AIDS Confront Inequality, for which she interviewed over 100 women living with the virus in the Chicago area. She spoke about her book’s findings during her speech. POZ, a sister publication of Real Health and Tu Salud, interviewed Watkins-Hayes when Remaking a Life was published in 2019. Below is an excerpt that’s relevant to the summit’s theme:

We often hear the term “social determinants of health” when we talk about health inequality, but in my view, that term can downplay the injustices and harms directly and indirectly committed against marginalized populations. I prefer “injuries of inequality” because it foregrounds inequity as the primary driver of health disparities and calls upon us to reflect on how people are wounded by the differences in resources and power that we too often see as an acceptable status quo. Injuries of inequality—big and small wounds to personal, family and community well-being—result from interpersonal, institutional or systemic violence or trauma rooted in the exploitation of unequal power dynamics. Injuries of inequality produce, and are produced by, a compromised ability to protect oneself from harm.

The HIV/AIDS epidemic is both an example of and fueled by injuries of inequality. The virus is transmitted through social and sexual networks, and our networks tend to be segregated by race and class and have unequal access to protective resources such as information, prevention and treatment resources. In addition, some of the biggest drivers of the epidemic—such as homophobia, racism, transphobia, sexism and poverty—shape the historical and present-day disparities in health care access and quality as well as our political and policy responses to these issues in ways that leave marginalized groups more vulnerable to HIV than more privileged sectors of society. 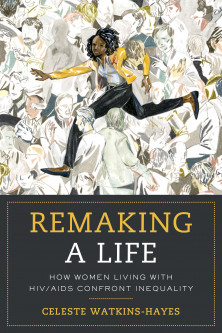 “Remaking a Life” by Celeste Watkins-Hayes

What is the top-line takeaway from your book that you’d like to leave with the POZ reader?

The most important takeaway from the book is that we discount the lives and experiences of marginalized populations at our collective peril. When I look at the success of the HIV/AIDS movement and the work that remains, the underlying theme is the way in which people in the minority—those who are systematically marginalized on the basis of sexuality, race, class, gender identity and other statuses—have created a movement and a tangible support structure to save and improve not only their own lives but also the lives of those around them. The HIV movement has led to important medical discoveries, changed the face of patient-physician interactions and generated models for what holistic wraparound care can look like in a variety of settings. In a moment when those on margins are routinely and visibly attacked and discounted, the danger of counting people out and devaluing what they can contribute cannot be more relevant.…

By interviewing women living with HIV for over a decade, I was able to illustrate how the HIV epidemic helps us pinpoint how women move from what I call “dying from” to “living with” to “thriving despite” personal traumas and systemic injuries of inequality, including but not limited to HIV.… The connective threads that made these personal transformations possible were women’s resilience as well as the collective strength of the HIV community.

In related news, in February 2021, Iris House launched a campaign to promote  testing for HIV, hepatitis C and sexually transmitted infections as well as  the importance of mental health among young people. To learn more and check out some of the campaign’s images, see “#BeGlowdAF: Young People Encourage Peers to Get Tested for HIV and Hepatitis C.”