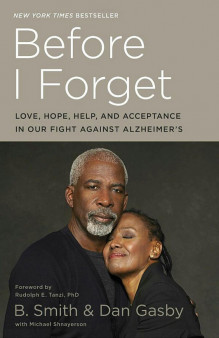 A former model and entrepreneur, Smith was a pioneer in the fields of fashion and style, culinary arts and home decor.

After a seven-year battle with Alzheimer’s disease, restaurateur, model and author Barbara “B.” Elaine Smith died February 22 at age 70, according to a statement from her husband of 28 years, Dan Gasby.

“Thank you to all the friends and fans who supported B. and our family during her journey,” said Gasby. “Thank you to everyone for respecting our privacy during this agonizing time.” The businessman and former television producer said heaven was shining brighter thanks to his wife’s “dazzling and unforgettable smile.”

As a fashion model, Smith graced the covers of 15 magazines and in 1976 was one of the first Black women to be featured on the cover of Mademoiselle. For nearly a decade, she hosted the nationally syndicated television show B. Smith with Style.

Smith also started a decor line, B. Smith with Style Home Collection, that debuted at Bed Bath & Beyond in 2001 and is also sold at JCPenney, Home Depot, Macy’s and other stores. (The line was the first by a Black woman to be sold at a nationwide retailer, according to her obituary.)

In addition, Smith was the author of the books B. Smith’s Entertaining and Cooking for Friends, B. Smith: Rituals and Celebration and B. Smith Cooks Southern-Style.

An award-winning entrepreneur and media personality, Smith opened her first restaurant in New York City. She ran three popular B. Smith restaurants—one in New York, one on Long Island and one in Washington, DC—until she was diagnosed, at age 64, with early-onset AD in 2013.

Subsequently, Smith and Gasby became advocates and raised awareness about the disease’s effects on the Black community. (Research shows that African Americans are twice as likely as white people to develop Alzheimer’s, the most common cause of dementia.)

The couple partnered with journalist Michael Shnayerson for their book, Before I Forget (2016), which shared Smith and her family’s fight with the disease through their narrative and included practical and helpful advice for those affected by the condition.

In 2016, Smith and Gasby spoke to Real Health about her diagnosis and how the disease had changed their relationship. Gasby also shed light on the relationship between Alzheimer’s and African Americans, referring to the disease as a “21st-century civil rights issue.”

“I think if people understood that two out of three Alzheimer’s sufferers are women, that Black people and people of color are two to three times more likely to get the illness and that when you’re older and in your 80s, one in two people living with the disease are people of color, they might see the connection,” he said.

Since her death, celebs including Al Roker, Gabrielle Union, Ava DuVernay and Viola Davis have honored Smith on social media. Davis tweeted, “RIP B. Smith. You epitomized class, true beauty and dignity. Rest well Queen.” (Read the rest of the tweets below.)

Smith is survived by Gasby and her stepdaughter, Dana.

We lost legendary fashion model, chef, restaurateur, lifestyle icon and magazine publisher, B Smith today. 70 years old, she and her husband, Dan Gasby were at the forefront of #alzheimers #research for people of color. Love to them and daughter, Dana. #bsmithwithstyle pic.twitter.com/pqFOpa9oxs

She was such a wonderful woman. So supportive and so damn fly... she is, was, and forever will be an ICON. #BSmith https://t.co/kw79wBT5eh

The elegance. The grace. The style. May God rest and bless her soul. #BSmith was one-of-a-kind.