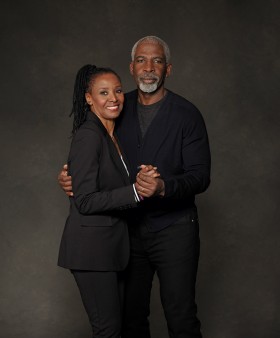 Courtesy of B. Smith and Dan Gasby/Heather Weston

After well-known restaurateur B. Smith was diagnosed with Alzheimer’s disease, she and her husband, Dan Gasby, chose to play the hand fate dealt them.

In Barbara Smith and Dan Gasby’s living room, photographs sit atop tables and other spaces, along with pieces of art and memorabilia. Like tangible memories of moments lived and savored in times gone by, these mementos recall trips taken, events attended and achievements recognized, high points in the lives of the celebrated couple that resides in this house. But for Barbara, best known simply by her first initial and last name, short-term memory loss set in at age 62. Other symptoms of early onset Alzheimer’s disease, or early onset AD, followed, until Dan was forced to admit to himself that something was terribly wrong with his wife’s behavior. The moment of truth happened on live TV during B.’s cooking demonstration of Labor Day recipes on the Today show. During the segment, B. blanked out. Dan watched her stand silent for an eternity of seconds after one of the show’s cohosts asked her a question.

Later, Dan learned that forgetfulness is one of the first signs of Alzheimer’s. But there would be many more symptoms to come before he’d stop denying there was a problem and finally accept the change in their lives.

Even now, after the medical tests, diagnosis, treatments and therapy, Dan’s acceptance of his wife’s condition and his role as her primary caregiver come hard. After all, Dan is only human. “It was difficult as recently as this morning,” he says. “Independent people want to be independent even if they can’t be. It’s difficult because she just doesn’t know what I’m going through; she has no clue, and the stress is enormous.”

When a doctor at Mt. Sinai Hospital in New York reviewed B.’s brain imaging scans with the couple, he showed Dan the amyloid plaque deposits, sticky pieces of a white protein that clump together in the brain and typically confirm an Alzheimer’s diagnosis. First, he gave Dan the bad news: Alzheimer’s has no cure and eventually leads to death. But the good news was that B. had the mildest stage of Alzheimer’s, understood she had the condition and was willing to engage in treatment to help her remain functional for as long as possible. Plus, she was also still able to tap into long-term memories of her youth, career and family.

“What I want to do when I talk to my family is go back to some of those days and bring them forward so that we’re still together,” B. says. “We still have things that we want to do, things that are good for the home, the body and for living, like going out and getting out of the house, because the house can bring you down, too, if you’re not on top of it.”

Walking along the beach helps the couple step outside their home and situation if only for a short time. For them, these strolls are incredibly therapeutic. “Earlier today, we went out and had a discussion she wanted to have,” he says, looking at his wife. “We walk a lot.”

On December 23, 1992, B. and Dan merged their personal relationship and partnership as business associates and were married in New York City. Together, the two ran B.’s multiple commercial enterprises: three B. Smith restaurants, a home-furnishings brand and her career as an actor and book author. The two were a dynamic team and appreciated their reputation as successful people who possessed the skills and savvy to get things done.

“It’s a far cry, looking back over this picture and remembering how it used to be,” Dan says. “I had a perfect life. I didn’t need anything else. I had a wife. We were two as one. I could look across the room and read her mind; she could look across the room and read mine. We could walk into a room and make things happen, talk to the president or captains of industry, just do anything.”

As Dan speaks, B. quietly becomes distracted, stands and leaves the room. Her departure stops the flow in his conversation, and he reacts with a slight shrug of his shoulder and shake of his head. “As you can see, now she got up and walked away, so, yeah, it’s a tough experience,” he continues. Then he pauses and calls out to his wife in a way that says he does this kind of caretaking supervision often, “Barbara? Honey, you want to join us?”

Dan is hardly alone in his role as caregiver to a family member with Alzheimer’s. The Alzheimer’s Foundation of America, estimates that one to four family members act as caregivers for each person with Alzheimer’s disease. In addition, the illness is more prevalent among African Americans than among whites, and blacks are more genetically inclined to develop the disease. The likelihood that black people will get Alzheimer’s is boosted by African Americans’ higher risk of developing conditions that damage the heart and blood vessels, such as high blood pressure, high cholesterol and diabetes. These illnesses can interfere with the blood’s ability to transport oxygen and nutrients to brain cells, which can stop the organ from functioning properly.

But besides the physical injuries Alzheimer’s can cause, the disease can devastate a family’s finances. “I think the one thing that must be screamed from the rafters is that Alzheimer’s is a 21st-century civil rights issue,” Dan says. “I think if people understood that two out of three Alzheimer’s sufferers are women, that black people and people of color are two to three times more likely to get the illness and that when you’re older and in your 80s, one in two people living with the disease are people of color, they might see the connection.”

Dan and his wife grew up during the civil rights era, sensitized to the issues of race and lack of socioeconomic opportunities for black people. Today, the high cost of living with Alzheimer’s affects not only their lifestyle, but also that of the 5.4 million Americans who may have the disease.

“The cost to maintain a person’s lifestyle and dignity is extremely expensive,” Dan says. “So people who have the least have to put out the most in terms of time and money. What Alzheimer’s does, sadly, is take away a lot of the most important elements that black people in particular need to be competitive in the 21st century.

“I’ve been fortunate in that I have some resources,” continues Dan. “But what about the woman with two or three kids who’s got to work and has a mother with Alzheimer’s? They’re going through this suffering, and the disease severely impacts the whole family. This means now they can’t take care of the little ones, and they’ve got to spend money, which causes their lives to spiral. This is why it’s so important for the government to increase funding to research this illness.”

And for B. and Dan, living with Alzheimer’s, in their home in Sag Harbor, Long Island, exacts a huge price—of one kind or another—each day.

The two had settled into a predictable routine, but it was interrupted without warning when B. went missing overnight in New York City. She’d become confused and disembarked from her bus at the wrong stop. After she’d walked around the city, she went to Staten Island on the ferry, returned to Manhattan and wandered about again until she wound up at a favorite diner the next morning.

After a family friend spotted B. at the restaurant, she called Dan’s daughter, Dana, who called her father before she went to pick up her stepmother and bring an end to the search that had been mounted to find her. The incident occurred two years ago, just before Thanksgiving, and it made headlines. Dan says that frightening episode sparked him to override B.’s stubborn refusal to get a home care attendant. After that crazy day, she reluctantly agreed.

Today, the loving tug-of-war between them continues, and B. says she knows her husband loves her. “We’ve been together for quite a while, and I think our relationship has gotten better,” she says, smiling at her husband. “The longer we’re together, the better it is.”

In general, Alzheimer’s progresses in stages, but each person experiences the disease differently. B.’s doctors subscribe to the three-stage model used to track the progress of the disease. While B. sticks to her drug treatment plan, she also adheres to a mostly meatless Mediterranean diet of fresh fruits, vegetables and oils. She and Dan exercise each day, and they play games geared to stimulate her cognitive skills and thinking.

Additionally, while her doctors watch the progression of the disease, Dan and B. also check for clinical trials in which she’s eligible to participate. “It’s very important for people to know black lives, black science and black medicine matter,” Dan says. “What scares me more than anything else is that because African Americans aren’t participating in drug trials, we’re at risk of not finding a way to mitigate the impact of this disease. We have a different genetic makeup, and we respond to drugs differently, so if you project to 2030 or 2050, this thing might be totally eradicated—except for one population. Wouldn’t that be a doomsday scenario?”

Theoretically, participation in clinical trials and the allocation of more resources to Alzheimer’s research are key components for helping not only black folks, but also everyone affected by this heartbreaking, life-stealing disease.

Samuel Cohen, PhD, a research fellow at St. John’s College at the University of Cambridge in the United Kingdom, believes the lack of resources stems from the public being mostly unaware that Alzheimer’s isn’t an inevitable part of aging. “We only have to look at a picture of a healthy aged brain compared to the brain of an Alzheimer’s patient to see the real physical damage caused by this disease,” he says.

Cohen stresses, “Here’s what few people know but everyone should: Alzheimer’s is a disease, and we can cure it.”