Meet one childhood cancer survivor and his mom who are eager to share their stories of hope and courage. 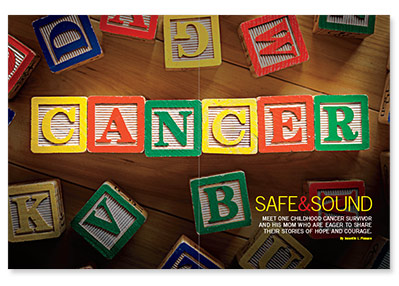 In the summer of 2012, Lori Thomas noticed that her 8-year-old son, Kenny, was rapidly losing weight.

He would also sweat profusely at night and had a bad cough. When she took him to the pediatrician, the doctor told her Kenny had a cold. Two weeks later, when Kenny didn’t rally, she returned to the doctor. The diagnosis—that Kenny might be suffering from post-nasal drip—left Thomas skeptical. “You know your kid, and you know when something isn’t right,” she says.

It was a Friday, and Thomas was prepared to take her son back to the pediatrician the following Monday. Instead, she and her husband wound up driving Kenny to the emergency room when his back began to hurt and he couldn’t keep his food down. “It was like he couldn’t stop vomiting,” Thomas says.

After doctors gave Kenny a chest X-ray, they found a cancerous mass in his chest. “He was diagnosed with stage III non-Hodgkin lymphoma,” Thomas says. “Later we found out that, thankfully, it hadn’t spread and was confined to his chest area.”

What causes childhood cancers remains unclear. But “infants with Down syndrome have a higher risk of cancer,” says Michael Weiner, MD, a pediatric oncologist at the Morgan Stanley Children’s Hospital of New York-Presbyterian and a member of the Hyundai Hope On Wheels Medical Advisory Committee.

When she learned about Kenny’s cancer diagnosis, Thomas immediately called her sister. “I didn’t know how to tell my mother and father,” she says. She also phoned a girlfriend, who helped Thomas deal with the situation.

“Emotionally, it was traumatic,” she says. But Thomas had no time for self-pity. Kenny was in the pediatric ICU at Miller Children’s Hospital for six days, followed by a week on the Miller oncology floor. “His life was saved at Miller,” Thomas says. Then he finished his treatment at the University of California, Los Angeles. The doctors there were “just fantastic,” she adds.

The next challenge for her was explaining the disease to Kenny. “We told him what he had and what the diagnosis was, but he didn’t understand the gravity of the situation,” Thomas says. “He knew that treatment was going to take quite some time and that he probably wouldn’t be going back to school until the following year. But all he knew was that he was being poked and prodded and he didn’t like it. That seemed to be more of a concern to him than the actual diagnosis.”

Thomas says she made sure she told Kenny the truth; she felt this was fair since he was the one going through the illness. “We never sugarcoated it; we were always truthful with him about his situation,” she says.

For parents with kids who have cancer, developing coping skills is key. Thomas suggests that parents find a compartment into which they can put their personal feelings so they can muster all their strength and encouragement for their child. “We understood what could happen, but we never allowed ourselves to go to the worse place,” she says. “One night, he asked me, ‘Mom, can I die from this?’ That was a tough question for an 8-year-old to ask.”

When she and her husband talked to their son, they’d speak in positive terms about the future. “We’d say things like ‘when you go back to school,’ or ‘when you grow up and have kids,’ so we always kept positive thoughts in our minds.”

Thomas says she was honest with Kenny that cancer could kill him. But she also reassured him that the disease was responding to treatment.

Kenny’s treatment entailed several rounds of chemo infusions three to four times each week along with injections of a medication into his spinal column. In addition, he was given a chemo pill to swallow each night through the end of 2014.

Last year, Kenny also received his last spinal injection. Now 11, he’s back in school and everything is going well for him. “He was very fortunate,” Thomas says. “We got news a lot of parents don’t get, and we feel very blessed.”

Kenny says that all his classmates knew about his fight with cancer. Occasionally, kids in his class asked him about the bump on his chest. This is where docs placed the port used to give him his cancer meds. Kenny also resumed his usual school activities, including playing basketball again.

But now he’s also a National Youth Ambassador for Hyundai Hope On Wheels. The program, founded by Hyundai, is among the largest nonprofit funders of pediatric cancer research in the United States.

This year, Hope On Wheels has awarded more than $100 million to fund pediatric cancer research. Other goals of the program are to create public awareness about childhood cancers and generate conversations about the necessity for more research, as well as improve standards of care for kids diagnosed with these illnesses.

Kenny likes traveling to new places and meeting different kids. “I like being the ambassador,” he says. “The only thing that’s not so great is sometimes we have really late flights.”

Kenny’s mom thought he would be a good advocate for the program. “We really believe in giving back, and I was happy he was given the opportunity to try to inspire and encourage other young children who are battling cancer,” Thomas says. “It’s important to spread the word.”

As an advocate who is helping to educate others about childhood cancers, Thomas has a key piece of advice she wants to give mothers: If you’re told everything is OK, but you believe something is wrong, you need to persist in trying to find out what’s really going on.

Although different cancers have different signs and symptoms, Weiner suggests that, in general, if a parent notices their child isn’t well or isn’t acting normally, take him or her to the pediatrician and ask plenty of questions. “This is for anything that doesn’t get better in a reasonable amount of time,” he says.

“Just trust your gut and trust your instinct and don’t settle to hear everything is OK,” Thomas advises. “You know your child, and the first time I took Kenny to the doctor I knew something was wrong. If they had done a blood test, they would have known his blood counts were off the chart and he would have been diagnosed a month earlier.”

Adds Thomas, “Some moms turn on the lights if their kid just coughs, and I tell them, ‘Good for you.’ Often, it’s nothing, but you just never know.”