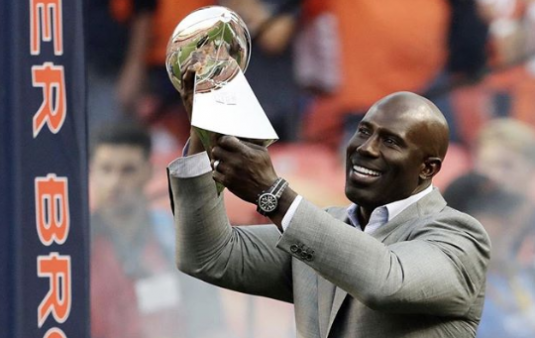 NFL Legend Terrell Davis on His Lifelong Battle With Migraines

The football star has struggled with intense headaches since age 9 and encourages men similarly affected to talk about their pain.

When the Denver Broncos won Super Bowl XXXII in 1998, Terrell Davis was named most valuable player. But now, the retired running back and NFL Hall of Famer reveals that an excruciating migraine almost stopped him from participating in the championship game, reports People.

Davis—whose migraines date back to his childhood—said he didn’t remember to take his preventive medicine until 15 minutes before game time (he was supposed to take them two hours prior to kickoff), which turned out to be too late.

Struck by a migraine, Davis was forced to sit out the second quarter of the game. But the former running back said, “I wasn’t going to let it rob me of my chance to be me for the day because I could never live past that.” After halftime, he returned to the field and helped the Broncos win the championship that earned him the MVP title.

“By this happening to me on such a public forum, it was also a tool to affect other people’s lives in a way that I didn’t realize,” he said. “Most of the fan mail [I got was] talking about migraines and thanking me for bringing this thing to the forefront.”

According to Davis, his first migraine occurred at football practice when he was 9 years old. The intense headache, which he describes as “so different than any headache I’ve ever had at the time,” caused Davis to think he was going blind. (At one point, the migraines were so unbearable that Davis says he had suicidal thoughts.)

Eventually, a physician diagnosed Davis’s condition after he told him the headaches occurred mostly during or after football practice. The doctor suggested he give up the sport.

“I didn’t like hearing that too much because I love football,” Davis said. “I wasn’t connecting those dots because there were a few times I was sitting in class looking at the chalkboard and all of a sudden, bam, one is triggered. So in my mind, it wasn’t just football and there were other things.” As a result, he decided to continue playing football.

Today, Davis knows how to manage his triggers. He also credits medication, a healthy diet and cannabidiol (CBD) products with helping to subdue his migraines. He wants his story to inspire other people—especially men—about how to handle the painful headbangers.

“It’s one of those things men are not comfortable talking about,” Davis said at the 2019 Migraine World Summit in March. “I see more guys talking about it now, but it’s not a lot. It [wasn’t] until I was retired that guys would say, ‘I went through it too.’ I was like, ‘Why didn’t you say anything back then?’ If you have migraines, it’s okay to talk about it.”

Click here to learn about a new FDA-approved drug that could stop the onset of these chronic headaches.