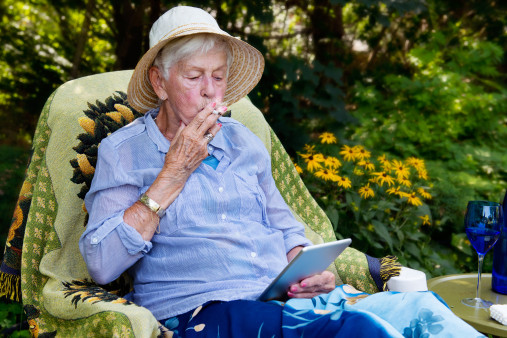 About 60% of elderly people report starting cannabis use after age 60 to help with pain, insomnia, anxiety and depression.

More older adults are using cannabis for medical purposes, including sleep problems and mental health issues, according to a new study published in the Journal of the American Geriatrics Society, reports the UC San Diego News Center.

For the inquiry, researchers at the UC San Diego School of Medicine surveyed 568 patients ages 65 and older who were treated at a clinic over a period of 10 weeks. Almost 15% of respondents reported having used cannabis within the past three years. More than half (53%) said they smoked marijuana regularly on a daily or weekly basis.

Results showed that the majority of patients used cannabis for medical purposes; the most common targeted conditions and symptoms were pain/arthritis (73%), insomnia (29%), anxiety (24%) and depression (17%).

Alison Moore, MD, the chief of the Division of Geriatrics in the Department of Medicine at UC San Diego School of Medicine and the senior author of the study, stressed that clinicians must become more aware of seniors’ marijuana use. In addition, she suggested that medical schools incorporate evidence-backed information about cannabis use into their curricula and that health providers include questions about pot when screening patients during clinic visits.

“There seems to be potential with cannabis, but we need more evidence-based research,” said Christopher Kaufmann, PhD, an assistant professor in the Division of Geriatrics and Gerontology in the Department of Medicine at UC San Diego and the study’s coauthor. “We want to find out how cannabis compares to current medications available…. We want to find out which conditions cannabis is most effective in treating.”

This would help doctors better counsel older adults on cannabis use, Kaufmann added.

For related coverage, read “People With Different Diseases Use Medical Marijuana Differently” and “Many Older Adults Support Marijuana for Medical Use but Want to See More Research.”