What Do Gen Z and Millennials Think About HIV?

HIV stigma persists among young Americans, and many are not informed about the virus and its transmission, even as they engage in high-risk sexual behavior. Those are the top-line findings of a new survey among millennials (adults ages 23 to 36) and members of Generation Z (18 to 22). What’s more, the picture looks worse as the respondents get younger.

The survey was conducted this summer as part of a new educational campaign titled “Owning HIV: Young Adults and the Fight Ahead,” a joint effort by Merck pharmaceuticals and HIV advocacy group Prevention Access Campaign. The latter is best known for launching the U=U (undetectable equals untransmittable) campaign, which promotes the fact that people with HIV who maintain an undetectable viral load cannot transmit the virus via sex.

“Owning HIV” was launched Monday, November 25. The campaign plans to release further data from the survey in the coming months. The findings, according to OwningHIV.com, will also be used to develop future initiatives.

A number of HIV groups and advocates provided input on the survey and campaign. These include Yonce Jones of Harlem Untied, Cameron Kinker of Prevention Access Campaign, Deondre Moore of AIDS Healthcare Foundation and an ambassador for The Elizabeth Taylor AIDS Foundation, Josh Robbins of ImStillJosh.com and Wanona “Nunu” Thomas of Live in Your Truth.

Below are a few more findings from the survey:

“These findings are a call to action that the crisis in the United States is far from over,” said Bruce Richman, founding executive director of the Prevention Access Campaign in the OwningHIV.com press release. “It’s time to elevate a real conversation about HIV and sexual health among America’s young people and roll out innovative and engaging initiatives to educate and fight HIV stigma.”

“We are actively applying these findings to inform forward-looking programming that will seek to educate and empower this population,” added Eliav Barr, MD, senior vice president of global medical affairs at Merck. “Our goal is to help improve overall understanding and literacy while elevating the urgency around this critical public health issue.” 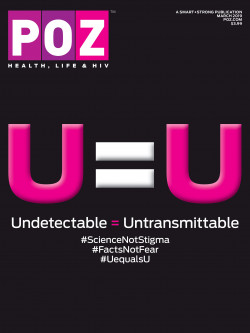 To learn more about the U=U campaign, check out this issue of POZ.