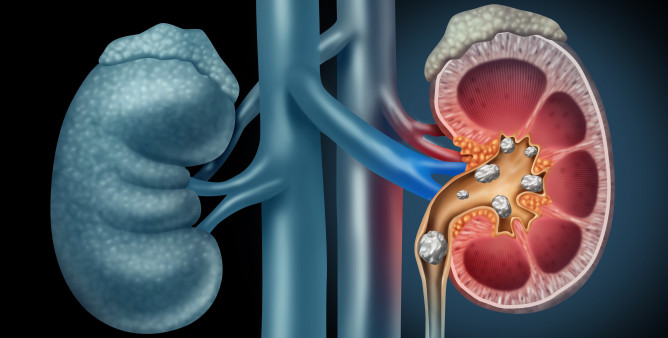 Findings Show That Kidney Stones Grow and Dissolve in the Body

A treatment that breaks down crystallized mineral salts inside the kidneys may one day be possible.

An estimated one in 11 people in the United States suffers from kidney stones. Now, a new study published in the journal Scientific Reports reveals that these stones, which are associated with conditions such as diabetes and obesity and were once thought to be insoluble in the kidney, could one day be forever dissolved right inside the organ, reports Medical News Today.

For the inquiry, researchers used the latest optical techniques and drew knowledge from several scientific fields to learn more about the nature and composition of thin sections of kidney stones.

Scientists found that the stones are actually “a minute-by-minute record of the health and functioning of a person’s kidney,” said Bruce Fouke, PhD, a professor of geology and microbiology at the University of Illinois, the co-lead author of the study.

This is because kidney stones are made of alternating organic matter and mineral-rich nano-layers of crystals that are very similar to other ancient sedimentary deposits.

In addition, when images showed that new crystals develop under degraded nano-layers, researchers learned that stones regularly disintegrate and grow back within the kidney.

This discovery points to the possibility of one day being “able to intervene to fully dissolve the kidney stones right in the patient’s kidney,” he added.

Click here to learn how tap water may contribute to the risk of developing kidney stones.

Stevie Wonder Says He Feels About 40 After Successful Kidney Transplant