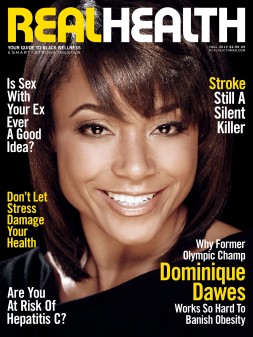 When it comes to showing kids the benefits of an active lifestyle, Olympic gymnast and gold medalist Dominique Dawes says you’ve got to do more than “talk the talk.” 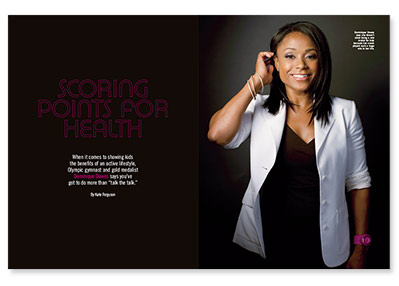 It says something about Dominique Dawes that she considers failure as her greatest achievement. The setback happened in full view of an international audience during the 1996 Olympic Games in Atlanta. Dawes’s foot slipped from under her at the end of an energetic tumbling pass, and the 19-year-old went out of bounds on a landing that commentators called a “sitdown.” With that mistake, Dawes lost her chance to win an individual gold medal in the all-around competition, an event that she was heavily favored to win. After she walked off the floor mat and sat down on the team bench, cameras zoomed in as her low score flashed and Dawes burst into tears.

Years later, Dawes would remember that ignominious moment as the spark that triggered an invisible growth spurt. According to Dawes, she returned to competition a better and stronger athlete and person. If points were passed out for character, Dawes would have netted 10s across the board. But the lessons also proved to be invaluable, especially in her advocacy work empowering young people and their parents to make better choices for their health.

“I really felt fulfilled when I was giving people messages that could actually help them live a better life, or become a little bit more educated about nutrition or the importance of physical activity or self-esteem or motivation,” Dawes says. “I right away felt a passion for health advocacy because I just felt a sense that I was giving people something positive to take home with them.”

In 2010, President Barack Obama offered Dawes a chance to make a difference to a wider audience. He appointed her as cochair of the President’s Council on Fitness, Sports and Nutrition. The agency sported a new name and debuted a new mandate when First Lady Michelle Obama announced that the goal of the council would be “to end the epidemic of childhood obesity in a generation.”

Dawes felt right at home with the mission. Her athletic background was in line with the agency’s goals, and Dawes brought those sensibilities and a youthful, enthusiastic energy to her work representing the council. Pointing to the increasing media coverage about obesity among today’s youth, Dawes sees a potential solution. “If someone is living a sedentary lifestyle,” she says, “many times this leads to weight gain, so, of course, physical activity is a benefit. We know that if [kids get] involved in sports, they’re going to be physically active.”

Dawes stands a trim 5 feet, 3 inches. Her fit physique reflects the six days of strict training she did each week as a competitive athlete, including working out in the gym for five to seven hours every session. And even though the buff Dawes might seem like the type who has never experienced weight issues of any kind, she admits that, like many women, she packed on about 15 to 20 pounds during her freshman year in college. And, although she has a gym membership, for Dawes, sometimes the spirit is willing but the flesh weak, and she also has to dig deep to get motivated and work out.

Studies show that obesity is associated with a negative self-image and that it threatens children’s self-esteem. This is one of the reasons Dawes is so focused on empowering kids, especially those at risk of obesity. Last year, Dawes worked with Michelle Obama’s “Let’s Move” initiative, a campaign that was specifically designed to battle childhood obesity. While Dawes was in London covering the Olympic Games for FoxSports.com, the first lady invited her to join a delegation of former athletes she organized for the campaign. The meeting was a high point in Dawes’s life, and she wrote a first-person account of her time as one of Mrs. Obama’s ministers of sport.

“After the Let’s Move event—with nearly 1,000 kids playing games and sports with us Olympians—we were spent,” Dawes wrote for FoxSports.com. “I got to play tennis with some of the kids. I got into a tug-of-war game with the first lady, but I felt bad because Nastia Liukin and Apolo Ohno [Olympic athletes] were my teammates, and we beat Mrs. Obama and her kids. So then I was like, ‘Let me help you out,’ and I joined her team, and we won. And I don’t think it was rigged; I think I really did help them. Between the first lady’s biceps and me, we were certainly going to dominate. That was just a fun time.”

Today, four out of five black women are overweight or obese, according to the Centers for Disease Control and Prevention (the CDC). Among population groups, African-American women carry the most weight on their frames. These excess pounds also place them at risk of a host of illnesses that include four chronic conditions well-known for stealing lives in the black community: type 2 diabetes, heart disease, high blood pressure and stroke. But there are other less publicized illnesses connected to obesity and being overweight that affect black folks, such as breathing problems, sleep apnea, gallbladder disease and certain cancers.

“At the end of the day, it all boils down to individual action and responsibility,” says Reed Tuckson, MD, the executive vice president of United Health Group, a leading U.S. health care company. “Either we are going to decide to live, or we are just going to let ourselves die.”

The need for the African-American community to take collective responsibility for its health and to fight against obesity is one that resonates with Dawes. Diabetes affects some members of her family, and since retiring from competitive gymnastics she has supported a series of initiatives squarely aimed at eliminating childhood obesity. Dawes is convinced that if children learn how to make better food choices and if they become motivated to live an active lifestyle, they can triumph over obesity.

Inspiring kids to get physically active will help them tackle weight issues, but another big plus, she adds, is that kids reap psychological benefits when they play sports. “Studies show that young girls and boys who participate in sports have a healthier self-esteem, more confidence and are open to overcoming certain challenges, setbacks and defeats,” Dawes says. “I know I fell off the balance beam many more times than I stayed on and lost more competitions than I won. But I learned about my weaknesses from each of those experiences and how to be a better athlete and strengthen my character.”

During almost 15 years of competing in gymnastics, Dawes also learned the value of setting goals. She feels this skill is an essential tool that parents must teach their kids. Setting goals and making physical activity part of their daily routine are healthy habits “kids can use when they’re in their 20s, 30s or beyond, whether they’re in college or in the boardroom,” Dawes says. “They can benefit from all these amazing qualities that they learn from their sports experience.”

Dawes believes parents can play a key role in helping to manage their children’s weight and diet. Last summer, when she teamed up with the Hormel Natural Choice campaign, “Raising Little Champions,” Dawes provided fitness and nutrition tips to families in search of ways to lead a healthier lifestyle.

“The best advice that I can give to parents on trying to help their children live a healthy lifestyle is for them to be role models,” Dawes says. “If your children see you make smart decisions when it comes to what you eat or when you work out, then they’re going to model that behavior too.”