Actress Adina Porter isn’t opposed to exploring medical treatments that just a few years ago weren’t regarded as mainstream medicine in the United States. But she also subscribes to traditional therapies. 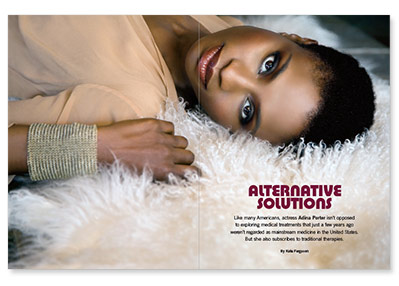 Click here to read a digital edition of this article.
Adina Porter doesn’t quite remember when she learned about homeopathy. She says this unconventional approach to medicine may have first crossed her path when she went to Los Angeles alone; strapped for cash, she didn’t have money to see a regular doctor. Then again, maybe it was when Porter learned that destroying the bad bacteria in your body with antibiotics could also cause a nasty yeast infection. “That might have been a clue to me that maybe there are other ways to get well besides killing every single bacteria in your body,” Porter recalls. “I learned that you should take acidophilus before you start antibiotics, so that might have been my pathway into looking at other ways of healing healthier.”

Porter is perhaps best known for her role as the mostly malevolent mom Lettie Mae Thornton in the HBO vampire series True Blood. Currently, she appears in recurring roles on both the HBO series The Newsroom, as well as the CW Network’s The 100.

Porter’s practice of taking acidophilus, a type of microorganism from a family of friendly bacteria called lactobacillus, before antibiotic treatment is based on sound science. Studies show that acidophilus is a probiotic, a supplement that replenishes the beneficial bacteria destroyed by antibiotics when we take them to kill infections. (Antibiotics don’t differentiate between bad bacteria that sicken us and the good bacteria that help our bodies stay healthy.)

Research shows taking probiotics may help offset some of the negative effects associated with antibiotic use. For example, an evaluation of 22 different studies found that taking probiotics reduced the odds of developing diarrhea  from taking antibiotics by 60 percent.

This practice of taking probiotics before, during or after treatment with antibiotics is a good example of complementary and alternative medicine, a.k.a. CAM. The National Center for Complementary and Alternative Medicine (NCCAM) defines CAM as “a group of diverse medical and health care systems, practices and products that are not presently considered to be part of conventional medicine.”

Recently, a national survey of complementary health practices conducted by NCCAM estimated that almost 4 million adults and nearly 1 million children used over-the-counter products labeled as homeopathic in addition to visiting a practitioner of homeopathy. What’s more, people use any number of other complementary approaches to health, such as chiropractic manipulation and massage therapy, dietary supplements that aren’t vitamins or minerals, and meditation, NCCAM found.

At the end of the 18th century, a German doctor named Samuel Hahnemann posed a theory that gave rise to homeopathy. Hahnemann theorized that you could treat and cure illnesses with medicines that produced milder symptoms of the disease. This gave rise to a saying credited to Hahnemann, “Like cures like,” which became the basis of his “principle of similars” and the “law of minimum dose” (the lower the dose of the medication, the greater its effectiveness). These are two pillars on which homeopathy is based.

According to NCCAM, homeopathic remedies are derived from substances that come from plants, minerals or animals and are formulated into sugar pellets that are placed under the tongue. In addition, these remedies may also come in other forms, such as ointments, gels, drops, creams and tablets. But treatments are tailored to the individual, so “it’s not uncommon for different people with the same condition to receive different treatments,” explains NCCAM on its website.

Many people turn to alternative treatments such as homeopathy because they fear traditional therapies. Some believe mainstream medicines are more toxic and do more harm than good. But there are also traditional doctors who use homeopathy and other alternative therapies to treat their patients. Pam Middleton, MD, is one of them. She is a holistic pediatrician in private practice in Newport Beach, California. Middleton took trainings in homeopathy as a way to provide safe and effective alternative therapies to treat children.

“In general, homeopathy is nontoxic and doesn’t interact with other meds, so if you used conventional meds, or even herbal remedies, you could still use homeopathy and there’s no risk of overdosing,” she says.

But NCCAM supports a more cautious approach to homeopathy. The organization explains that “some products labeled as homeopathic can contain substantial amounts of active ingredients and therefore could cause side effects and drug interactions.”

Still, Middleton is guided by her experience using homeopathy. “A lot of the alternative treatments that are available to the adult population aren’t appropriate for children, not even herbal medication because that can be very strong,” she says. “But drugstores now carry homeopathic medications, so I’m OK with a parent going out to the store and finding what they need for their child’s cold or allergy, and I know it’s not going to do any harm.”

As makers of homeopathic medicines, these companies are part of a growing multimillion-dollar industry that’s also regulated by the Food and Drug Administration (FDA). According to the FDA, homeopathic products that are offered for treatment of serious conditions must be dispensed under the care of a licensed practitioner. Other homeopathic medicines offered for use to treat illnesses or conditions recognizable to the public may be marketed over the counter.

Middleton says although her patients tend to be fairly familiar with homeopathy, she’s “also found that a lot of people who have heard about it don’t really know exactly what it is, or they don’t really understand how it works.”

Porter says she once used a homeopathic sleep aid after a devastating breakup with a boyfriend. “Even though my heart was broken, I fell asleep and had a good night’s sleep,” she says. “I was amazed.”

Although many different people use CAM, those who typically turn to these types of unconventional treatments are more likely to be wealthy white women, ages 35 to 55, who live in western states. Currently, many hospitals offer some form of complementary or alternative medicine, and doctors often refer patients to other physicians who specialize in CAM.

CAM treatments are also covered by many health insurance plans, especially those that are now regarded as more mainstream, such as acupuncture and chiropractic therapy. Like many people, Porter mixes her approach to health care, going mainstream in some instances then choosing more alternative therapies when she feels the need. She chose a nurse practitioner as her primary care doctor, but she also visits specialists to have them perform procedures. “I just had a colonoscopy with a physician who was formerly my primary care doctor,” she says. “But I look to nurse practitioners or chiropractors first.”

Essentially, Porter has been using a common-sense approach depending on the illness she’s facing or how serious her health issue is. “I take things on a case-by-case basis,” she says. “I get my mammograms, so I kind of have a foot in both camps. If I can cure something homeopathically, I’ll do it. Luckily, I haven’t faced a serious illness, like some friends of mine who tried to beat cancer homeopathically. Treating a grave illness with traditional medicine versus alternative treatments, that’s a serious choice to have to make.”

Porter’s approach is supported by NCCAM. The organization advises people who are considering homeopathy, or other unconventional approaches to treatment, to always get checked by their health care providers. The organization believes that the current research on homeopathy lacks enough evidence to support such alternative methods of treatment as being effective for any specific condition.

And although Middleton practices homeopathy, she agrees that people shouldn’t take any chances with their health when considering any alternative health treatment. Her professional advice says it all: “If you have medical concerns, you always want to consult with your physician.”

Love Is the Message